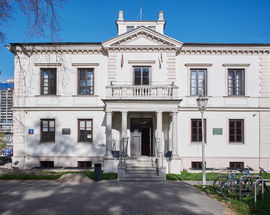 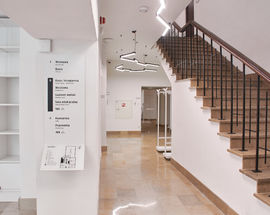 Home to nearly 150,000 people Wola is that great big district to the west of the centre, and this museum is here to document Wola’s history from 1374 till the present. Run as a branch of the Museum of Warsaw, the museum comes housed in a grey looking neo-Renaissance palace dating from 1880, with the building indelibly printed in the (mis)fortunes of the district; it’s here that the 3rd company of Chrobry II division of the Home Army (Poland’s underground military movement) held their headquarters during the days of the Warsaw Uprising.

Operating as a museum since 1974, the museum's primary function is as host to temporary exhibits (you'll have to look online for those), but it also boasts a large collection on the history of the Wola district that features over 5,000 film, cultural and propaganda posters, plus posh pre-war silverware that includes a caviar box made by Schiffers and weird-looking forks for scoffing crabs. Life before 1939 is well-documented through a series of black and white photos showing Wola before it was raped by SS-Oberführer Dirlewanger, as well as busts and portraits of the fat cat industrialists who once lived here. The war changed Wola forever, and these times are remembered by way of photographs of the Ghetto, as well as bits and pieces donated by veterans of the Warsaw Uprising; among these find personal papers, medals, helmets, radios and sketches of post-Uprising incarceration.