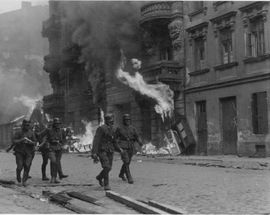 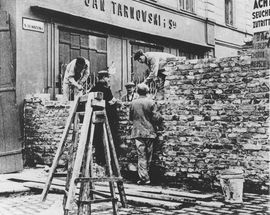 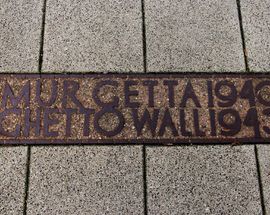 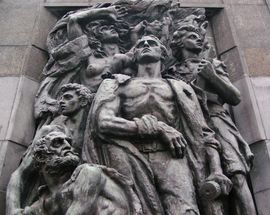 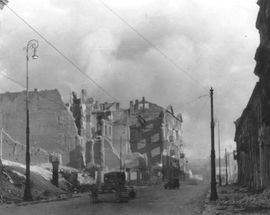 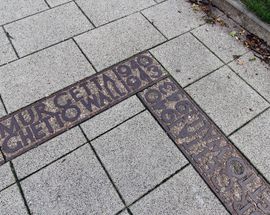 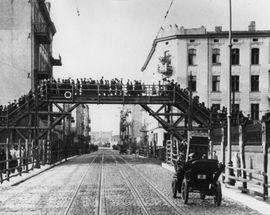 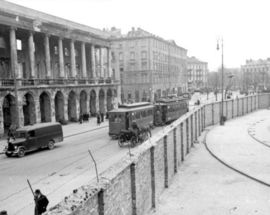 If you are ever in Warsaw during April/May, you will be here during the anniversary of the Warsaw Ghetto Uprising. Throughout the city, official commemorations are held, there are discussions in the media about the historical importance of the event, but most importantly, there are symbols of remembrance dotted around the city that citizens of the world visit and pay respect to the people that perished on the streets of Warsaw.

The Warsaw Ghetto Uprising of 1943, though inevitably destined to fail, has gone down in history as an act of defiance, an act of protest against the inaction of the world in helping the Jewish people in their plight during the Second World War. This was their time to fight. And so it was to be that from 19 April to 16 May 1943, following years of torment, the fighters of the Warsaw Ghetto rose up, vastly outmatched by the superior numbers and weaponry of the German war machine. The fighters had a simple choice: go quietly and die anyway, facing extermination in a camp; or go fighting, defying the barbaric system which had spread across Europe.

In 1942 there came a tipping point in the until-then passive resistance of Jewish communities, as they were moved from ghetto to ghetto, camp to camp, under the pretences of resettlement or forced labour. Some believed resettlement was taking place, others that they were needed as labour for the German war effort; others simply accepted they could do nothing to get away. By mid-1942, however, word was spreading, initially through rumours, then from witness accounts, that Jews were being exterminated in Nazi death camps. Between July and September of 1942 alone, around 280,000 Jews were deported from the Warsaw Ghetto to Treblinka extermination camp, another 11,000 were sent to labour camps, and around 10,000 were killed in the Warsaw Ghetto itself during the deportation process. On 28 July 1942, amidst deportations, members of Jewish youth organisations formed the Jewish Fighting Organisation (ŻOB - Żydowska Organizacja Bojowa), with a young Mordechai Anielewicz appointed as its leader.

The first act of defiance actually took place on 18 January 1943, prior to the Ghetto Uprising itself, which saw ŻOB fighters armed with pistols infiltrate a column of Jews being marched to the Umschlagplatz by German escorts. They attacked the Germans, which allowed people to scatter. Of the planned 8,000 deportations, 3,000 were prevented from taking place as the Germans suspended further deportations until further notice. There now remained around 50,000 Jews in the Ghetto. They knew what was to come, and so they began building bunkers wherever and wherever they could.

The Jewish fighters were buoyed by the apparent success of the January action, however the Germans came much better prepared - with tanks and heavy artillery - when they arrived to liquidate the Ghetto on 19 April 1943. Nevertheless, the Germans received a nasty surprise as they entered to find the Ghetto's streets deserted (everyone hiding in bunkers) and the Jewish fighters, armed with pistols, grenades, and some automatic weapons and rifles, attacked. Numbering only around 700 fighters, the Germans were stunned on the first day of fighting, losing 12 men while the rest were forced to retreat beyond the walls of the Ghetto.

The fighters continued their dogged resistance, and though the Germans quickly broke the military organisation of the Jewish fighters, pockets of resistance couldn't be easily dealt with, and so the Germans began to use heavy artillery and even Stuka Dive Bombers. It was a doomed struggle. Vicious street-to-street, house-to-house battles ensued, with insurgents often burnt out of their boltholes by flamethrowers and gas. On 8 May, German forces surrounded the principal command post of the rebels on ul. Miła 18 and though some did escape, rather than face capture, Anielewicz and his cabal opted for mass suicide. By May 16 the Warsaw Ghetto Uprising was over, with German commander Jurgen Stroop announcing, 'The former Jewish quarter of Warsaw is no longer in existence.' With the fighting over, the rest of the Ghetto was levelled, and its inmates either sent to Treblinka or Gęsiówka (ul. Gęsia), a small concentration camp nearby. As a final, symbolic act of Jewish Warsaw's demise, the Germans blew up the Great Synagogue on ul. Tłomackie. It is estimated 7,000 Jews and roughly 300 Germans were killed during the Warsaw Ghetto Uprising. The survivors of the liquidation of the Warsaw Ghetto, some 42,000 people, were transported to the Majdanek concentration camp near Lublin.

Very little remains of the former Ghetto today, however, to give you an idea of scale, the area consisted of 1/3 the size of the city of Warsaw (mainly the Mirów/Muranów and Wola districts, plus parts of the city centre). Despite the destruction, small parts of the Ghetto remain today, from the buildings around ul. Waliców 14 and ul. Próżna next to Plac Grzybowski that somehow survived destruction, to original fragments of the ghetto wall.

Traces & Memorials of the Warsaw Ghetto

Intersection of ul. Chłodna and ul. Żelazna
/warsaw/a-footbridge-of-memory_97606v
One of the most enduring images of the Warsaw Ghetto is that of the footbridge constructed over ul. Chłodna to connect
see more
Monuments

ul. Zamenhofa
/warsaw/ghetto-heroes-monument_19581v
In the middle of a large, attractive square beside the POLIN Museum, you'll find the Monument to the Ghetto Heroes, which commemorates
see more
Monuments

ul. Prosta 51
/warsaw/memorial-to-the-evacuation-of-warsaw-ghetto_154003v
Unveiled in 2010, this monument is located on ul. Prosta 51, right next to the sewer entrance where a group of around 50 fighters from the Warsaw Ghe
see more
Monuments

ul. Sienna 55
/warsaw/jewish-ghetto-wall-fragment_19583v
Following the 1943 Ghetto Uprising the whole area was levelled so few traces remain. If you duck into the courtyard at ul. Sienna 55
see more
Monuments

ul. Miła 2
/warsaw/anielewicz-bunker_68378v
A small mound and memorial (only 350m from POLIN), marks the site of the large bunker from which the
see more
The Warsaw Uprising

Ruins of the Risings

ul. Waliców 14
/warsaw/ruins-of-the-risings_18444v
Between 1939 and 1944 85% of the left-bank of Warsaw was completely destroyed, with the city centre bearing the brunt of the damage. In spite of the Herculean …
see more
Monuments

ul. Stawki
/warsaw/umschlagplatz_19584v
Found on ul. Stawki, close to the intersection with ul. Dzika, Umschlagplatz is a bleak, slightly disappointing monument marking the spot where around 300,000 …
see more