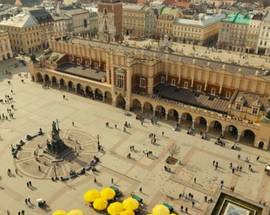 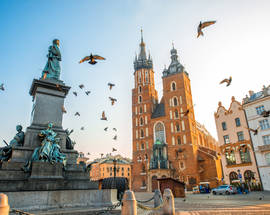 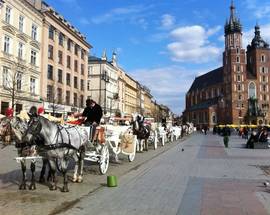 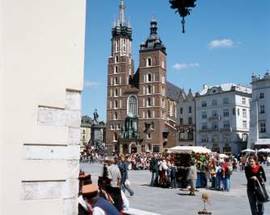 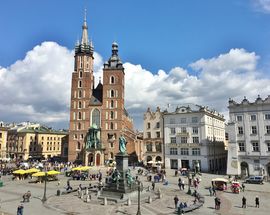 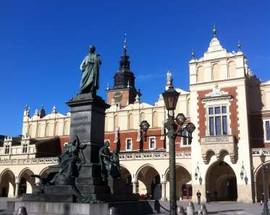 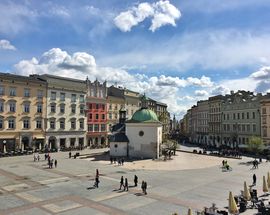 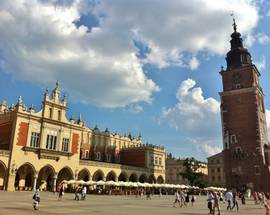 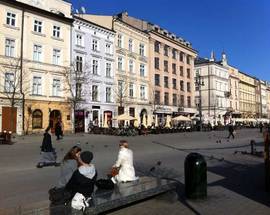 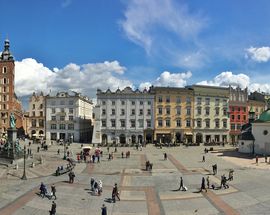 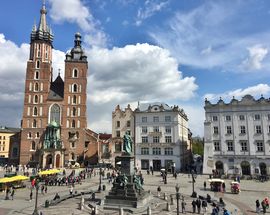 Kraków’s main market square ('Rynek Główny') serves as the city’s gravitational centre, and is the natural start and finish point for any tour of the city. Originally designed in 1257 - the year Kraków was awarded its charter – the grid-like layout of the Old Town and its central square has changed little in the years that have followed. Measuring 200 metres squared (40,000 square metres), the Rynek ranks as one of the largest medieval squares in Europe, and is surrounded by elegant townhouses, all with their own unique names, histories and curiosities. Through the centuries it was in Kraków’s Rynek that homage to the king was sworn and public executions held. Most famously it was here that Tadeusz Kościuszko roused the locals to revolt against foreign rule in 1794. The Rynek has always been the natural stage for public celebrations, with everything from parades of sausage dogs to Christmas crib competitions taking place. Not all the events have had been happy affairs however, and back in the 17th century King Jan Sobieski III was privy to a firework display which ended in bloodshed when some of the explosives were accidentally fired into the crowd. More recently the market square was subjected to a Nazi rally attended by Der Führer himself when the square’s name was changed to ‘Adolf Hitler Platz’ during German occupation. Fortunately the moniker didn’t last long and today the Rynek occupies itself by hosting annual Christmas and Easter markets, as well as numerous festivals and outdoor concerts.


What to See on Kraków's Market Square

Taking centre stage is the Cloth Hall (Sukiennice). Built in the 14th century this huge hall was effectively the first shopping mall in the world. To this day it is still crammed with merchant stalls selling amber, lace, woodwork and assorted tourist tat. In 2010, Rynek Underground - a 4,000m2, hi-tech museum tracing the history of the Cloth Hall, and that of the entire city - opened underneath it, while the second floor hosts the underrated 19th Century Polish Art Gallery.

Directly next to the Sukiennice stands Poland’s most eminent scribe: Adam Mickiewicz. Ironically, the bard never visited the city until after his death when his remains were transferred to the Wawel Cathedral crypt, but this hasn’t stopped the statue from becoming one of Kraków’s best loved monuments. Across from Mickiewicz looms the magnificent St. Mary’s Basilica, its crowning glory being Veit Stoss’ altarpiece. The area surrounding the Basilica was formerly a cemetery, and the bodies of hundreds of Cracovians still lie beneath the cobbles. Ghoulish tourists will also appreciate the set of metal neck restraints displayed on the side door of St Mary’s, formerly used to punish philandering women. Also, don't miss the famous bugle call played from the tower of St. Mary's every hour, on the hour - one of Kraków's most charming and famous traditions.

On the square’s other side is the 70 metre Town Hall Tower, the only element of the 14th century Town Hall remaining after many fires, renovations and uncaring demolitions. From March until the end of December visitors can ascend up lots of stairs to the 3rd floor through Gothic vaulted rooms which contain, amongst other things, 1960s photographs of Kraków and rather underwhelming views to the west and south.

Rynek Główny 25
featured
/krakow/international-cultural-centre_16573v
COVID-19 update: The ICC reopened on May 19th with new regulations for visiting. From 13:00-14:00 priority is given to visi
see more
Featured

Rynek Główny 1
featured
/krakow/rynek-underground_72197v
Opened in a blaze of publicity in September 2010, this hi-tech and highly popular museum takes visitors four metres under the surface of the market square to explore the recently excavated medieval merchant stalls that predate today’s
see more
Featured

Pl. Mariacki 5
featured
/krakow/st-marys-basilica_17091v
After Tartar raids in the 13th century left the original church in a heap of ruins, St. Mary’s was rebuilt in Gothic style on the existing foundations and consecrated in 1320. In the early 15th century the towers took the iconic form they have today, whe
see more
Featured

Rynek Główny
/krakow/adam-mickiewicz-monument_31309v
One of the most important statues in Poland, the large likeness of the romantic poet and national hero Adam Mickiewicz (1798-1855) was originally unveiled in 1898 to celebrate the centenary of the great man’s birth, and, like so many other symbols of
see more

Rynek Główny
/krakow/carriage-rides_118790v
Lined up along the market square, horse-drawn carriage rides are a popular, albeit for some controversial, way to tour/trot around the Old Town. Operated by a number of different companies, routes and prices are individually determined w
see more

Rynek Główny 1/3
/krakow/cloth-hall_34459v
The iconic glory-piece at the centre of Kraków’s market square, there is proof that a structure of some sort has existed on the site of t
see more

Rynek Główny 23
/krakow/empik_20326v
Boasting the UNESCO-condoned claim of 'Europe's first bookshop,' the building at Rynek 23 has been in the book business since 1610. Unfortunately, this hasn't necessarily meant success for all of its tenants as it has changed hands several times, most re
see more

Rynek Główny
/krakow/eros-bendato_58845v
Among Kraków’s most well-known landmarks, this sculpture in the western corner of the market square is a popular meeting place and at some point serves as a photographic backdrop for almost every tourist who visits the city. Affectionately referred to
see more

ul. Podgórska 34
/krakow/goethe-institute_16570v
Kicked out of their beautiful neo-classical palace on the market square, you'll now find the Goethe Institute in a small location inside...
see more

Rynek Główny 27
/krakow/piwnica-pod-baranami_134870v
The very definition of the oft-copied 'Cracovian cellar bar,' this legendary venue has been around since 1956 when renowned eccentric Piotr Skrzynecki (see his
see more

Rynek Główny 1
/krakow/ratuszowa_16367v
In summer, this is one of the most lively locations on the market square, with fantastic live concerts every evening in the covered seating under the Town Hall Tower. In winter, the
see more

Rynek Główny 1
/krakow/town-hall-tower_17118v
After many fires, renovations and uncaring demolitions, the only element of the 14th century Town Hall remaining is this 70m-high tower, proudly standing next to the
see more

03.07.2017
Kasia
Kraków
What an amazing Square! Just love to wonder around the area n having a coffee at one of the outside reastuarants both during the day n night. Never bored with this place!
05.06.2017
Patricia

I love that place :)
12.02.2014
Janette Buist
Glasgow, United Kingdom
Been before loved the place
Take your guide with you Download a pdf