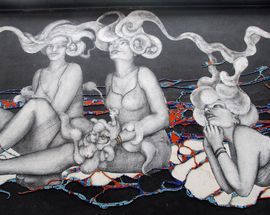 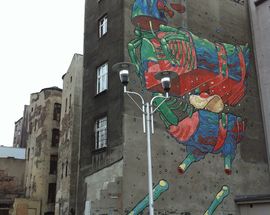 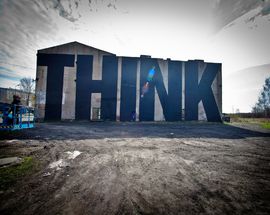 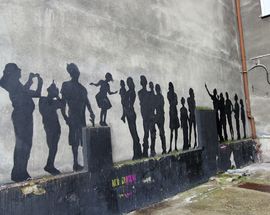 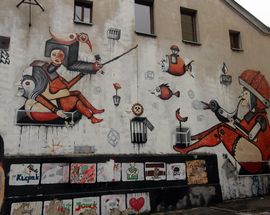 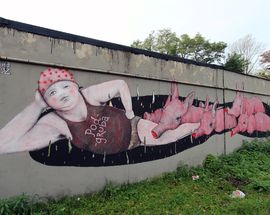 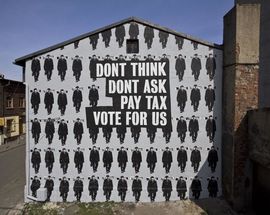 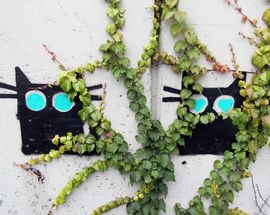 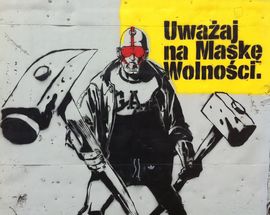 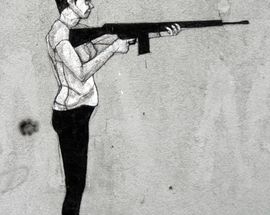 Up until the last decade or so, there was little reason for foreign tourists or visitors from across Poland to visit Katowice. We'll be brutally honest and say there was little to draw anyone here. But that was long ago, and we've previously written about the massive transformation which has taken place (and continues to do so) in Katowice. Today, we trumpet the merits of visiting our beloved Katowice! For culture vultures, the numerous festivals which take place here are a major draw, and, of course, then there are those seeking out industrial heritage or historical family connections - this is a city which has something for everyone, however, the city itself up until recently suffered from a bad reputation, mostly amongst Polish people themselves. There was a post-industrial slump when large factories and mines shut down and/or relocated. Unemployment rates shot up, as did all the other negative statistics that go hand-in-hand with a city's decline. The local authorities knew they needed to change things. And change is exactly what they have been undertaking in the last decade through a big urban regeneration plan.

In this very guide, we've praised the virtues of the transformation of Downtown Katowice and the addition of the Cultural Zone and a whole host of museums, but there's an unsung element, which can be often overlooked, but in equal measure brings people to this city, the aim to explore, to stare up at buildings – we are, of course, referring to the city's big collection of street murals! And who do we have to thank for that in Kato? AiR (organisers of the street art festival).

Created in 2011, AiR took its tentative first steps, which eventually led to Katowice's very first street art festival in the same year. In such a short time, a whole host of international artists from Belgium's ROA, Spain's ARYZ, and national artists such as M-City, and local Silesian artists too, like the amazingly talented Raspazjan, Mona Tusz and Miszmasz have splashed their creativity on the walls of many of Katowice's buildings and walls, rivalling what other cities like Berlin have to offer. Indeed, Katowice is increasingly being recognised for its cultural revolution, and despite still being under the radar, even in Polish minds, it's really on the up...and yet most visitors to the country have never heard of it! You're here at a good time, discovering a city still grappling with its recently acquired culture vulture credentials, but still obscure enough to raise an eyebrow at the very mention of the name amongst international tourists?  Kato-which-eh?

To date, AiR has overseen the addition of about 60 murals over a decade. What's great is that street art is completely accessible to all, come rain or shine, on foot or by bike, what you choose to see, it's all just a matter of having the will to go and explore. From works of art that provide clear cut messages, to the more obscure works open to interpretation; regardless, they are an expression of an artist's creativity. There's plenty to see, and there will be more to come.

If you're only in the city for a short time, not a problem - one of the best places to see street art in Kato is ul. Mariacka Tylna (literally parallel to ul. Mariacka) and the adjacent Mariacka underpass. Here you will see huge murals and  some smaller stencil works, tags and graffiti. This area is a treasure trove and not a full 10 minute walk away from the rynek (main square).

You simply need to visit all the street art sights to see the full extent of the work – the answer is plainly painted on the walls! For as much as the city has regenerated itself through infrastructure projects, and fresh licks of paint here and there, it's the other type of paint, often the one from cans, which can be overlooked. The cultural diversity displayed on the streets of Katowice is vast and shows how a city can change its fortunes in such a short time to become one of positive change. While AiR has been a celebrated success, in other cities, such as Berlin, there is an ongoing debate about whether street art has been appropriated by authorities, another form of gentrification that counters the original intentions of the artists and purposes of the murals. Katowice has employed the talents of street artists to create public art in the service of the re-invigoration of the city, with quite an element of success as they have remembered two important factors of street art – to respect the work of the artist while adding value to a neighbourhood and the community of people that live there. Stick to this and we'll keep the beast of gentrification at bay with a big stick!


Two prime examples come from local artists Raspazjan and Mona Tusz, who have worked alongisde other artists, but more importantly, with the locals. The first example is found in Katowice's Załęże district at 'Dom Aniołów Strożów' (House of Guardian Angels), an association created to help children and young people, with the children adding their own artistic detail to the works which stretch around the walls. And it's not just the kids who are getting involved; Chorzów’s ‘Intergenerational Mural’ by Mona Tusz employed the talents of older citizens to engage with them and the wider community. This is why we love street art - it should be engaging and open to all.

There's plenty to see across Katowice, whether you stick to the city centre, or go further afield. At any rate, those with an interest in street art will have little trouble tracking it down, and we’re making it even easier. We fully encourage you, especially in these warm months, to see as much of the murals, and street art installations, as you can. It's a pleasant adventure in itself as you inevitably get to see the city for yourself, including parts you would not otherwise have considered going.

In addition to cataloguing and GPSing street art addresses throughout the city in our online street art section, we’ve also marked each location with a spray can symbol on the maps in the back of our guide, so you can literally use them to give yourself a tour of Katowice’s urban art. As for online, we've even listed all pieces of street art, old and new, to keep you informed if they still exist or not, to save you time from visiting a site, only to discover that once fantastic mural has been painted over, or worse, the building it was on is gone (if you find that piece has been painted over since we've last been, please, do let us know)!

Wandering around the city you are also bound to stumble across some rather fine and less ‘in your face’ little creative acts. We particularly like the painted and stencilled gas and electricity boxes which are dotted around town. They are frequently changed and too many to mention, but keep your eyes peeled, you'll no doubt see plenty on your travels around Katowice. Happy Hunting.

ul. Teatralna 2A
EDITOR'S PICK
/katowice/zachod-slonca_153498v
This cool neon installation is found above the River Rawa located in the courtyard entrance at ul. Teatralna 2A (be careful not to get locked in as the gate …
see more
Editor's pick
Street Murals

ul. 1 Maja 7
/katowice/3d-mural_153447v
Created in 2015 by an Agency called 'Good Looking' who normally focus on commercial murals; this one doesn't actually advertise anything, which makes it worth …
see more
Street Murals

ul. Warszawska 11
/katowice/dawno-w-miescie-nie-bylem_153426v
'Dawno w mieście nie byłem' (I've not been in the city in a while) is a work by Polish artist Marcin Miecieweski created in 2010 showing a person looking out …
see more
Street Murals

ul. Mariacka Tylna 21
/katowice/daydream_153484v
Created by Polish artist Sławomir Elsner in 2011. This piece, titled 'Daydream', shows the silhouettes of people looking up at a boy walking on a tightrope. …
see more
Street Murals

ul. Lelewela 3
/katowice/made-you-look_153509v
'Made You Look' was created by UK artist Mobstr in 2013 as part of the Katowice Street Art Festival.
see more
Street Murals

ul. Bankowa 12
/katowice/maria-goeppert-mayer-mural_153485v
This mural honouring Nobel laureate Maria Goeppert Mayer, who was born in Katowice in 1906, and awarded the Nobel for Physics in 1963 (along with J. Hans D. …
see more
Street Murals

ul. Markiefki 96
/katowice/mudwig-mural_153507v
If you're looking for the Police Ant on Markiefki 55, don't bother, it's gone. Instead, enjoy this piece by UK artist Daniel Sparkes (Mudwig) created in 2013.
see more
Street Murals

ul. Oswobodzenia 6
/katowice/pod-gruba-mural_153489v
This mural by local Polish artist Mona Tusz is found on an old garage building across from the Wilson Shaft Gallery in the
see more
Street Murals

ul. Oswobodzenia 10
/katowice/raspazjan-mural_153491v
This mural by local Polish artist Raspazjan is found on an old garage building across from the Wilson Shaft Gallery in the
see more
Street Murals

Sorry But Your Princess is in Another Castle

ul. Słowackiego 24
/katowice/sorry-but-your-princess-is-in-another-castle_153492v
This neon installation was created by Russian artist Tima Radia in 2017 and is a homage to Super Mario Bros. Get it?
see more
Street Art Installations

ul. Warszawska 37
/katowice/szum_153496v
Go through the courtyard at ul. Warszawska 37 and see the work by Wrocław local artist Łukasz Berger entitled 'SZUM' (noise), made out of nails sticking out of …
see more
Street Murals

ul. Kupca 14
/katowice/tato-nie-placz_153427v
Created in 2015, based on the artwork of a local schoolgirl called Zosia, the childish drawing shows a daughter's interpretation of her father's work, with the …
see more
Street Murals

ul. Teatralna 2A
/katowice/teatralna-2a-street-art_153534v
At the gated entrance to this courtyard you will find crazy little designs, incorporated into their surroundings (the chipped brick wall), and beyond, more …
see more
Street Murals

ul. Morawa 5
/katowice/vovo-vorotniov-mural_153468v
Created by Ukrainian artist Vovo Vorotniov in 2014 for the Katowice Street Art Festival. Vovo comes from a mining city near Lviv, so for this piece, he created …
see more
Street Murals