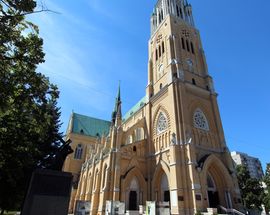 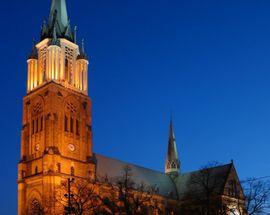 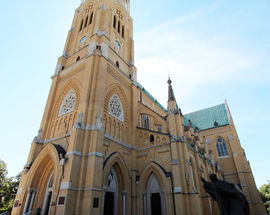 The city’s Roman Catholic Cathedral is the biggest church in Łódź. A true Gothic masterpiece it was built between 1901 and 1912 by the famous Łódź builders Wende & Zarske from original drawings supposedly supplied by the Berlin architect, Emil Zillmann. Styled along the lines of a typical medieval cathedral with three aisles, transept, choir, ambulatory and Lady Chapel, the interior is famous for being rather severe. Damaged by a fire in 1971, the Cathedral has been painstakingly restored including the addition of a new roof supported by modern steel trusses. On the Chancery's side find a small Cenotaph dedicated to the Unknown Soldier, and on the opposite side a monument to Father Ignacy Skorupka, a Roman Catholic priest who is believed to have made a great contribution to the country’s victory over the Bolsheviks in 1920.

17.12.2017
Bert
Łódź, Poland
I would probably revise the "Open" section for the cathedral. We contacted them via phone and they said organising a visit was impossible and tourists are not welcome.
12.11.2013
George Dubya&#045;Palin
Alaska. USA
Looks like a village has lost its idiot.
12.10.2009
Bob

I think that there are way too many big words in this thingy ma bobber...
Take your guide with you Download a pdf