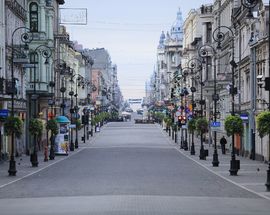 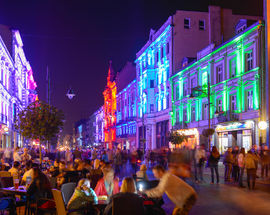 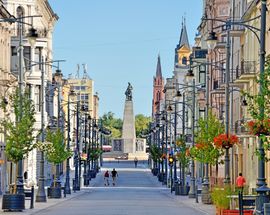 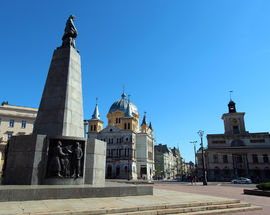 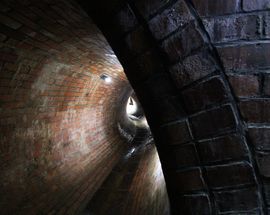 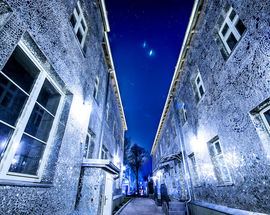 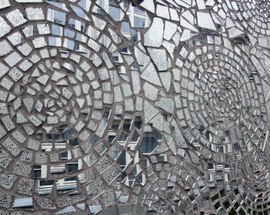 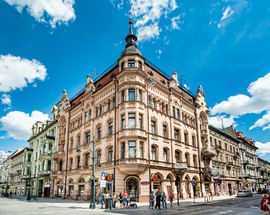 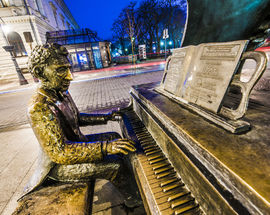 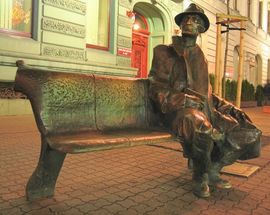 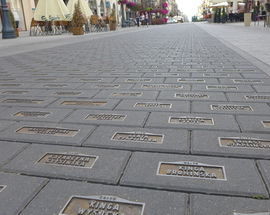 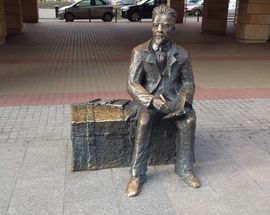 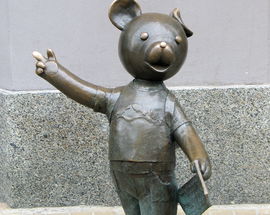 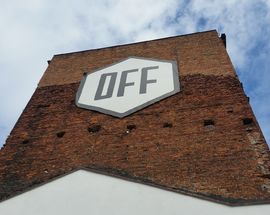 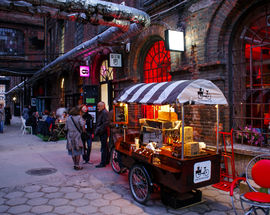 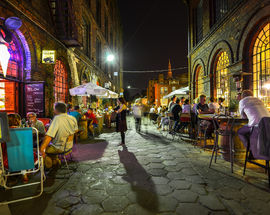 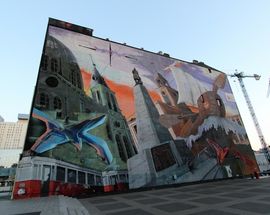 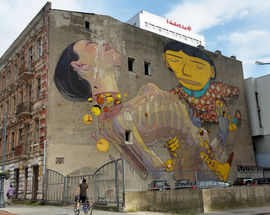 Splitting Łódź into two, ulica Piotrkowska stands out as the commercial and social heart of the city. Measuring just under five kilometres, it ranks as Europe’s longest pedestrian street and is lined with restaurants, beer gardens, street food stands, and a mix of neo-renaissance and art nouveau buildings; the majority now restored to their former glory. There's no doubt the northern half is the busiest section of the street, and most visitors will start their Łódź escapades here. Starting at the Tadeusz Kościuszko statue at the northern end of the street at Plac Wolności, the street stretches southwards with crews of all-year-round rickshaws (5zł per person from end to end) spiriting travellers to the destination of choice. Pretty much all of Łódź’s major industrialists kept residences on this street, as if their palaces were not enough, and many of the buildings boast intricate details on their facades; ranging from reliefs of dolphins to dragons to demons. The most popular part of the street is no  doubt OFF Piotrkowska, with its many bars, cafes, restaurants and all round good feel places. In more recent years Łódź entered the Guinness Book of Records for a time as possessing the largest mural in the world, now deemed one of the largest in Europe. Painted by the Design Futura group in November 2001, the mural took two months to complete and is apparently very symbolic. The 'city of Łódź' mural Features Plac Wolności and the Kościuszko monument, Old Town Hall, an old tram and the city’s emblem on the side of a boat, the work combines the traditional with the modern and is well worth having a look at. Find it in the car park at ul. Piotrkowska 152, and just around the corner you will find another mural by Spanish artist Aryz and Brazilian brothers Os Gemeos.

Łódź’s most recognizable hotel can be found halfway down Piotrkowska. Constructed in 1887-1888 the neo-renaissance Grand Hotel was originally the work of Ludwik Meyer, though the building saw sweeping renovations (including an extra floor) in 1913, courtesy of the architect Dawid Lande – a man whose designs deeply influenced the appearance of Piotrkowska. Directly outside the hotel is the ‘Walk of Fame’ – star-shaped plaques celebrating Poland’s most famous cinema artists and directors. Other highlights to keep an eye out for include pianist Artur Rubinstein’s statue, and the ‘Turn of the Millennium’ walk: running from Piotrkowska 98 through till 146 you’ll find 12,859 names of Łódź residents engraved into the paving. Elsewhere monuments of famous characters related to Łódź (the aforementioned Rubinstein, Polish writer and Nobel Laureate Władysław Reymont and writer and poet Julian Tuwim etc.) can be found dispersed around the street. You'll also find a statue to one of Poland's most famous bears, Miś Uszatek, one of 9 Fairytale Łódź statues found around the city. At the intersection of Piotrkowska, at al. Piłsudskiego, the officially named central tram stop (Dworzec  Tramwajowy Centrum) is affectionately known by locals as 'Stajnia Jednorożców' (Unicorn Stables) due to its colourful mosaic roof.

What to See on the north end of Piotrkowska in Łódź

Pl. Wolności
/lodz/plac-wolnosci_105445v
To find the spiritual centre of Łódź one must not go to ulica Piotrkowska, but to the bottom of it, namely to pl. Wolności (Freedom Square). It’s from
see more
Monuments

Pl. Wolności 12
/lodz/tadeusz-kosciuszko-monument_21113v
Dominating the north end of Piotrkowska stands the towering figure of Poland’s most celebrated revolutionary. As the driving force behind the 1794 insurrection …
see more
Street Art Installation

ul. Piotrkowska 3
EDITOR'S PICK
/lodz/rozas-passage_152556v
Walking through the courtyard from Piotrkowska 3 (or from ul. Zachodnia 56) really highlights how such a simple idea can have a big impact. Róża's Passa
see more
Editor's pick
Places of Interest

ul. Piotrkowska
featured
/lodz/lodz-walk-of-fame_86064v
Borrowing the idea from the Hollywood Walk of Fame, Łódź created its own strip of sidewalk featuring over 65 star-shaped plaques honouring the best of Polish …
see more
Featured
Monuments

ul. Piotrkowska 78
/lodz/artur-rubinsteins-piano_20763v
Szytenchelm’s idea of adding a monument to local writer and poet Julian Tuwim to Piotrkowska 104 proved so popular he expanded on it, adding the figure of
see more
Monuments

ul. Piotrkowska 104
/lodz/julian-tuwims-bench_20761v
Łódź-born Julian Tuwim (1894 - 1953) was a Jewish writer and poet who studied law and philosophy at Warsaw University and was the co-founder and leader of the …
see more
Monuments

ul. Piotrkowska 133
/lodz/wladyslaw-reymonts-trunk_20762v
Polish writer and winner of the Nobel Prize for Literature in 1924. Brought up in the town of Tuszyn, close to Łódź, his early life proved inauspicious, with …
see more
Places of Interest

ul. Piotrkowska 152
/lodz/city-of-lodz-mural_152642v
The largest of all murals in Łódź, and indeed Europe, at 30x20m and one representing the city. Created by the 'Design Future' group in 2001.
see more
Monuments

ul. Piotrkowska 87
/lodz/fairytale-lodz_154280v
What started off as a novelty turned into a downright obsession with monuments. Unveiled between 2009-15, ten Łódź Bajkowa (Fairytale Łódź) monuments are …
see more