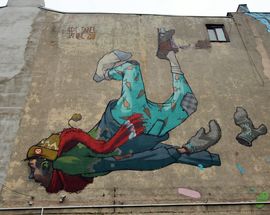 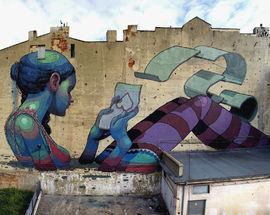 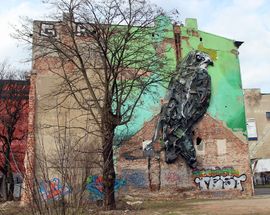 There's always been that special something that has drawn people to Łódź. For people like filmmaker David Lynch, it was the city's film-making credentials which drew him here, the town's old facades adding a charm like no other city. Then there were those seeking out industrial heritage or historical family connections - this is a city which always had something for everyone, however, the city itself up until recently suffered from a bad reputation, mostly amongst Polish people themselves. There was a post-industrial slump when large factories shut down and/or relocated. Unemployment rates shot up, as did all the other negative statistics that go hand-in-hand with a city's decline. The local authorities knew they needed to change things. And change is exactly what they have been undertaking in the last decade through a big urban regeneration plan, which of course, is still ongoing.

In this very guide, we've praised the virtues of the transformation of Manufaktura of EC1 and a whole host of museums, but there's an unsung element, which can be often overlooked, but in equal measure brings people to this city, the aim to explore, to stare up at buildings – we are, of course, referring to the city's big collection of street murals! And who do we have to thank for that? The Urban Forms Foundation!

Created in 2008, Urban Forms took its tentative first steps, and started work in 2009, which eventually led to Łódź's very first street art festival in 2011. In such a short time, a whole host of international artists from Spain's ARYZ, Brazil's OS Gemeos, China's DALeast, and national artists such as M-City, Raspazjan, Mona Tusz have splashed their creativity on the walls of many of Łódź's buildings and walls, rivalling what other cities like Berlin have to offer. Indeed, Łódź is increasingly being recognised as one of Europe's little gems...which most people have never heard of! You're here at a good time, discovering a city still grappling with its recently acquired cool credentials, but still obscure enough to raise an eyebrow at the very mention of the name amongst international tourists? "Woo-what?"

To date, Urban Forms has overseen the addition of about 80 murals over a decade. What's great is that street art is completely accessible to all, come rain or shine, on foot or by bike, what you choose to see, it's all just a matter of having the will to go and explore. From works of art that provide clear cut messages, to the more obscure works open to interpretation; regardless, they are an expression of an artist's creativity. There's plenty to see, and there will be more to come.

In 2018, Urban Forms celebrated its 10th anniversary (with the Urban Forms Festival, 22-29 July), so what have they achieved in this time? First off, you simply need to visit all the street art sights to see the full extent of the work – the answer is plainly painted on the walls! For as much as the city has regenerated itself through infrastructure projects, and fresh licks of paint here and there, it's the other type of paint, often the one from cans, which can be overlooked. The cultural diversity displayed on the streets of Łódź is vast and shows how a city can change its fortunes in such a short time to become one of positive change. While Urban Forms has been a celebrated success, in other cities, such as Berlin, there is an ongoing debate about whether street art has been appropriated by authorities, another form of gentrification that counters the original intentions of the artists and purposes of the murals. Łódź has employed the talents of street artists to create public art in the service of the re-invigoration of the city, with quite an element of success as they have remembered two important factors of street art – to respect the work of the artist while adding value to a neighbourhood and the community of people that live there. Stick to this and we'll keep the beast of gentrification at bay with a big stick!

At any rate, those with an interest in street art will have little trouble tracking it down in Łódź, and we’re making it even easier. We fully encourage you, especially in these warm months, to see as much of the murals, and street art installations, as you can. It's a pleasant adventure in itself as you inevitably get to see the city for yourself, including parts you would not otherwise have considered going.

In addition to cataloguing and GPSing street art addresses throughout the city in our online street art section, we’ve also marked each location with a spray can symbol on the maps in the back of our guide, so you can literally use them to give yourself a tour of Łódź’s urban art. As for online, we've even listed all pieces of street art, old and new, to keep you informed if they still exist or not, to save you time from visiting a site, only to discover that once fantastic mural has been painted over, or worse, the building it was on is gone (if you find that piece has been painted over since we've last been, please, do let us know)!

Wandering around the city you are also bound to stumble across some rather fine and less ‘in your face’ little creative acts. We particularly like the painted and stencilled gas and electricity boxes which are dotted around town. They are frequently changed and too many to mention, but keep your eyes peeled, you'll no doubt see plenty on your travels around Łódź. Happy Hunting.

ul. Piotrkowska 3
EDITOR'S PICK
/lodz/rozas-passage_152556v
Walking through the courtyard from Piotrkowska 3 (or from ul. Zachodnia 56) really highlights how such a simple idea can have a big impact. Róża's Passa
see more
Editor's pick
Murals

ul. Pomorska 67
EDITOR'S PICK
/lodz/woman-in-bath_152628v
Created by Spanish artist Aryz in 2014 for the Urban Forms project, you'll most likely see this piece if you're on way to the  area of the former Jewish …
see more
Editor's pick
Murals

ul. Jaracza 20
/lodz/taurus-mural_152710v
Created by OPIEMME in 2016 for the Urban Forms project, as part of the 'Energy of the City' festival (Energia Miasta). Locals were invited by the artist to …
see more
Murals

ul. Wólczańska 13
/lodz/cisza_152633v
Created using half a tonne of nails by Wrocław artist Łukasz Berger in 2015, Cisza (Silence), is a reflection upon communication between people and the reality …
see more
Murals

Portrait of a Woman

ul. Żeromskiego 103
/lodz/portrait-of-a-woman_152630v
Created in 2014 by Portuguese artist Vhils for the Urban Forms project. Interestingly, it was during a walk through Łódź that the artist spotted the model he …
see more
Murals

ul. Rewolucji 1905 roku 58
/lodz/revolution-of-1905_152708v
This mural commemorates the Revolution of 1905 in Łódź! The creator of the work is the Klub Krytyki Politycznej (Club for Critical Politics). The work was …
see more
Murals

The Children of Bałuty - Memorial Murals

ul. Przemysłowa 12
/lodz/the-children-of-baluty-memorial-murals_152555v
The Children of Bałuty (Dzieci Bałut) records, in mural form, the real images of children (created using archive images of the time) that were interned within …
see more
Murals

ul. Pomorska 67
/lodz/borondo-mural_152661v
Created by Spanish artist Gonzalo Borondo in 2015 for the Urban Forms project. You get 2-for-1 with this address as on the other side of the same building you …
see more
Murals

ul. Sienkiewicza 71
/lodz/zoer-and-velvet-mural_152664v
Created in 2015 by French artists Frédéric Zoer and Matthieu Velvet for the Urban Forms project. Their work is characteristic as they like to focus on …
see more
Murals

Al. Politechniki 16
/lodz/madame-chicken_152635v
Created by the Etam Cru in 2012 for the Urban Forms project it depicts an old lady holding a chicken. Such a simple idea, but pleasant to look at. This is …
see more
Murals

ul. Kilińskiego 127
/lodz/bird-mural_152631v
Created by Portuguese artist Bordalo II in 2015 for the Urban Forms project. The mural depicts a bird (a swift, to be precise) made of old junk, from car parts …
see more
Murals

ul. Łąkowa 10
/lodz/deer-mural_152629v
Created by Chinese artist DALeast in 2014 for the Urban Forms project. The artist is known to use fine lines to create forms usually depicting scenes from …
see more
Murals

ul. Piotrkowska 73
/lodz/lodz-hall-of-fame_152654v
Found directly across from the Artur Rubenstein piano monument, look to the side lane named in his honour. Now look up at the mural to see a collection of …
see more