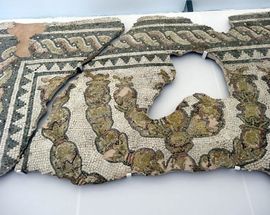 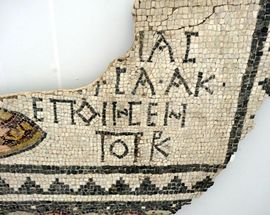 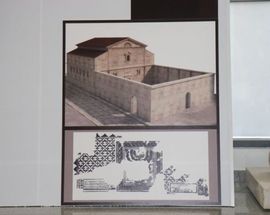 Recent archaeological research in the heart of Plovdiv revealed a unique ancient Synagogue dating back to the first half of the 3-rd century AD. Today, only the foundation of the temple and part of the mosaic floor is preserved, revealing a basilica-like building with three naves (central one and two aisles) located in North-South direction. The width of the central nave is twice as long as the width of the aisles. The purpose of the building is determined by the two mosaic floors built one over the other with great craftsmanship and extremely rich colours of red, orange, green, black, and white stones depicting the image of Menorah and the palm branch which are symbolic for the Jewish community and other geometrical shapes. The preserved mosaic can be seen in a form that is as close to their original as possible at the Regional Archaeological Museum since 2016 when it was shown to public for the first time. A four-line inscription in Greek is found as well, providing information about the names of the donors of the temple.

The ruins of the ancient temple are located on bul.Maria Luiza very close to The Small Basilica.

pl. Saedinenie 1
/plovdiv/Regional-Archaeological-Museum_98283v
The relatively small museum is a pleasure to visit. The modern interior features several halls with modern glass cabinets with spotlighting and excellent descriptions in both English and Bulgarian.There are even illustrations and graphs to help your unde
see more