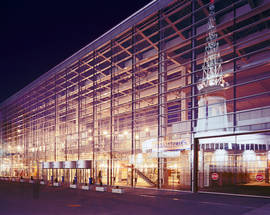 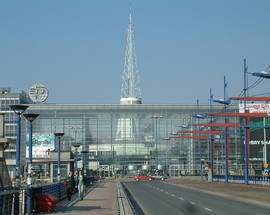 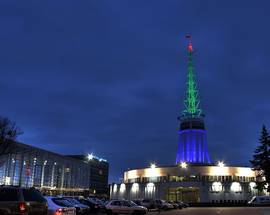 While many foreign visitors to Central Europe may be unfamiliar with Poznań, businesspeople involved in foreign trade are likely to be more than aware of the city. That's because Poznań is Poland's trade fair capital with the title justified by the country's biggest fair grounds, where the biggest and best fairs in Poland take place each year.

Poznań’s rich trading tradition can be traced back as far as 1254 when Duke Przemysł I granted special privileges to traders. That tradition continued over the ages, but the true predecessor of today's fair was the 1911 East German Industrial Exhibition, which showcased Germany's economic, cultural, and social achievements in annexed Polish territories. It was for this event that the iconic Upper Silesian Tower was commissioned and built - an early modernist combination of water tower and exhibition hall, praised by architecture critics and despised by the Polish populace as a symbol of foreign oppression. It gained enough fame to directly inspire the set design of Fritz Lang's film Metropolis, and would remain an integral part of the Poznań Fair until its demise during WWII air raids.

During a 1917 meeting, the Union of Merchant Associations, comprising merchants from Greater Poland and Eastern Pomerania, decided to develop a specialised cyclical expo based on the successful model of the Leipzig Trade Fair (an institution dating back to the twelfth century). This idea reached fruition on May 28, 1921, when the first Poznań Fair took place. Since then, the Fair’s fortunes have risen and fallen according to the political and economic changes that periodically moved through Poland and Europe.

After Poland re-emerged on the map of Europe in 1918 with the advent of the second Polish Republic, the Poznań Fair was instrumental in helping to re-integrate economic activities. It contributed to the task of creating a new Polish market and in demonstrating to the outside world Poland’s readiness for economic and commercial cooperation. It also helped with the complex task of unifying the three areas of Poland separated during the partitions and in which different fiscal, monetary and legal systems operated.

In 1929, the city of Poznań and the Poznań International Fair held the Polish General Exhibition (PeWuKa for short), which showed the world the achievements of the first decade of the new Polish state. Over 4.5 million people visited the fair, including delegations from many foreign countries. The Poznań International Fair was one of the few that managed to survive the great economic crisis of 1929-1932, and by the outbreak of WWII it was considered one of Europe’s leading fairs.

However, the war had a catastrophic effect on the International Fair complex. The Germans used the buildings for storage and to manufacture airplane parts. On Easter Sunday 1943, a day when no Poles were at the Fair, the British Royal Air Force bombed pavilions 5 and 8 as Stanisław Laskowski, the Fair’s president, looked on. Pavilion 5 was rebuilt in the 1970s with funds from the British Department of Trade and Industry.

In 1946 rebuilding started on the same land, and the first post-war fair was held under the title "Fashion and Home" ("Odzież i dom"). The Poznań International Fair started anew in 1947 but was once again forced to close - this time in the years 1951-54, due to the atmosphere created by the Cold War. It was only in 1955, with the multi-product Poznań International Fair exhibit, that the Fair started cooperating with foreign countries again. The same year the Spire Pavilion was constructed over the remains of the Upper Silesian Tower, to soon become one of the city's most recognisable landmarks and a symbol of the exposition. The Soviet era atmosphere could still turn tense, as it did in 1956, when street protests against the totalitarian regime erupted during what is known as the Poznań June - all in front of the eyes of foreign visitors.

The 1960s were a time of robust growth for the Fair, so much so that organisers started running out of exposition space, expanding into Wilson Park, the Edwardowo region, and the lakeside. In 1973, the event was broken up into two smaller chunks - the International Technology Fair, which would take place every June, and the International Edible Goods Fair, to be hosted each September. A specialisation of sorts was taking place, with more independent events branching off of the main expo; those included the Salmed Medical Equipment Fair, the Polygraphy Fair, the Drema Woodworking Machinery Fair, and the Intermasz Construction Machinery Fair.

The fall of communism saw the transition of the Poznań Fair from a state-owned entity to a private limited company with the Polish State Treasury as one of the shareholders. Since then, the expo has been significantly modernised and westernised, and is currently one of the largest fairs of its type in Central-Eastern Europe. In recent years, it has brought in over ten thousand exhibitors a year, around a quarter of them foreign, to participate in sixty or so events ranging from welding to horticulture and from logistics to beach fashion. Yearly visitors total half a million.

ul. Głogowska 14
/poznan/earth-hall_150654v
The Poznań Congress Centre's showpiece is the visually stunning Earth Hall, a performance and conference space with a seating capacity of nearly 2000, one of …
see more