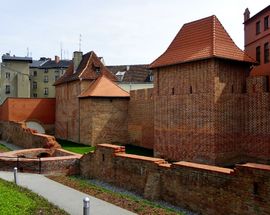 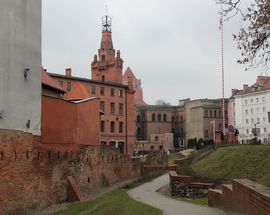 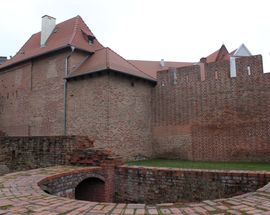 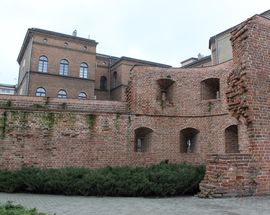 As a typical central European city, Poznań of course was once snugly encircled by city walls and a moat, with four gates guarding the passage into the narrow streets. Along the walls rose a number of defensive towers named after the guilds who were normally responsible for manning them: there was the Wheelwright Tower, Butcher Tower, and Cloth Tower, to name a few. Originally built sometime in the 13th century, the fortifications were unfortunately largely destroyed during the Swedish Deluge in the 17th century and later invasions of the city, and what was left was almost completely taken apart by the Prussians in the 19th and early 20th centuries to make room for new building projects. One of those was a rather splendid neo-Gothic fire station, which - lovingly refurbished - survives to this day at ul. Masztalarska 3. Passing through its courtyard is a stretch of reconstructed city wall and two rebuilt towers: Baszta Strażacka (Firefighter Tower, not the original name), and Baszta Katarzynek, once part of a convent inhabited by Dominican nuns (then known as 'Katarzynki'). Part of a third tower, Baszta Armatnia (Artillery Tower) stands on the Roman Wilhelmi Square. Completed in 2008, the resurrected city fortifications are a lovely place for a (short) stroll north of the main square.