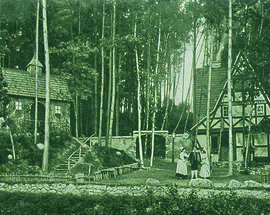 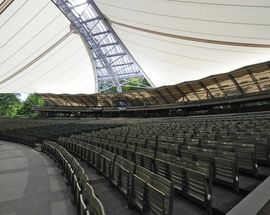 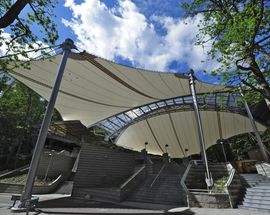 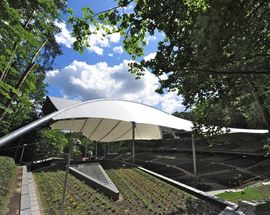 One of the country’s most famous stages and without question its most wonderfully located is Sopot’s Opera Leśna (Forest Opera), a magical open-air theatre nestled in the middle of a serene hilly forest in the western district of the city. With a history stretching back over 100 years the theatre has seen everything from German opera to Whitney Houston performances while it gained worldwide fame during communist times as the venue of the Soviet Bloc’s answer to the Eurovision Song Contest. A rebuilding programme in the years 2009-12 now sees it marry its unique location with 21st century facilities and one of the best sound and vision systems in Europe.

The Forest Opera, which saw itself being re-branded as the Sopot Art Opera after modernisation (we still prefer to use its old and more descriptive name), is today one of the city’s major attractions. But what’s the story behind it?

Well back in 1909 Paul Walther-Schaffer, bandmaster supreme at the music theatre in Gdansk’s Coal Market, took a walk Sopot (German Zoppot) way and stumbled across a big clearing hemmed in by steep hills and old trees. ‘Wow, great place to hold a concert’, he no doubt thought. Mayor of Zoppot, Max Woldman, agreed and it wasn’t long before a building permit was confirmed. Designed by the bandmaster, and supervised by Gdansk (Danzig) architect Paul Püchmüller, construction proceeded at lightning speed, and the finished work was unveiled four months later.

Opening night, August 11, 1909, saw ‘The Night Camp in Granada’ performed, and during the interwar years the opera gained a reputation for top entertainment. As mentioned elsewhere in this guide Zoppot in the late 19th century and the first half of the 20th century was an extremely popular and upmarket summer and spa destination not just for the people of Danzig but for people from all over Germany and Poland. The fact that Kaiser Wilhelm had a number of summer residences in the area, including 2 in Zoppot itself where he entertained European royalty before WWI only confirms that this was a place to see and be seen in. Following WWI the Forest Opera grew in popularity thanks, in part, to a festival in 1921 held to celebrate the 150th anniversary of Ludwig Beethoven’s birth. The decision to stage Wagner’s opera ‘Siegfried’ the following year proved to be a key moment in the history of the Forest Opera as German critics raved at the quality of the performance and the venue so much that it was decided to organise Wagner festivals here every year. Wagner’s ‘Valkyrie’ premiered here in 1924 and the quality of the performances and the performers Zoppot was now able to attract spread its fame well beyond the borders of the Free City of Danzig which it now found itself part of. The city gained itself a reputation as a second Bayreuth (Waldoper Zoppot – the Bayreuth of the North) as apart from the odd exception, only Wagner operas were performed featuring a choir of up to 500 singers. The stage sets and decoration were wonderful and attracted audiences of up to 8,000 people (half of whom were seated) and the inter-war years were truly a golden period for both the Opera and the city. Those familiar with Gunter Grass’ most famous book The Tin Drum may recall a visit to the Zoppot Opera by the story’s hero Oskar Matzerath to watch Der fliegende Hollander during this period.

Golden periods, by their very nature, have to end though and the outbreak of WWII gradually saw the number and quality of performances decline, although the crowds continued to come helped in no small part by the fact that Zoppot was a centre for soldiers on leave or rehabilitating from wounds suffered on the front.

With the end of WWII and many of the key players in the life of the Forest Opera gone forever from the city (now renamed Sopot) plus no doubt the reticence of the local population to see Wagner performed again, the Forest Opera was largely unused aside from the occasional local, largely small-scale theatre performances.

It wasn’t until the early 1960s and the creation of the Sopot Festival that new life was breathed into the venue. The festival, created by Władysław Szpilman - best known as the protagonist in Roman Polanski’s Holocaust epic, The Pianist, had taken place in the Gdansk shipyards from its inception in 1961. The unsuitability of the shipyards for this role soon saw the idea mooted to move the festival to the Forest Opera and in 1964 a huge 90m roof weighing 2.5 tonnes and covering 4,750m2 was constructed in various parts of Poland and shipped and assembled over the redeveloped stage and audience. The first performance of Moniuszko's "Halka" attracted huge crowds drawn as much to see the new theatre as by the performance. But it was the Sopot Festival that was to make the city and the Forest Opera famous once more.

The original idea of the festival was to attract artists, not just from Poland and Eastern Europe but from all over the world, to come to Sopot to perform Polish songs. The idea to perform only Polish songs was dismissed and artists from all over the world were attracted to perform in pursuit of the festival’s major prize. Despite what you might imagine, it was western performers who did best in these early years reflected by the fact that 9 of the first 13 winners of the festival’s top prize came from countries such as the US, UK, Switzerland, Canada and Greece.

It was in the years 1977-80 that probably make for the most fascinating in the long history of the Forest Opera. With the Soviet Union and its satellites outside of the European Broadcasting Union and therefore unable to take part in the popular Eurovision Song Contest, it was decided to create a rival competition and so the song festival saw itself re-invented as the Intervision Song Contest (Interwizja). Artists from all over the Soviet Bloc competed but it wasn’t exclusively for Eastern European countries as the participation of countries such as Cuba and Finland (winners in 1980) demonstrated. Alongside the competition the biggest draw was the appearance of big names from the west during the interval that drew the crowds to the Forest Opera and to their television sets (the contest was broadcast across the whole of Eastern Europe) and big names of the time such as Demis Roussos and Boney M performed. Returning to Sopot in 2006 Roussos recalled performing at Sopot was one of the most enjoyable moments of his career as much for the hospitality he enjoyed from his Polish hosts as for the chance to perform in front of a huge television audience.

As you might imagine, with unrest with their communist leaders in Warsaw and Moscow reaching a pinnacle during this period, the Poles took great enjoyment at making their feelings felt. The BBC’s Steve Rosenberg, in an piece written about Interwizja, highlights a number of examples where the festival’s participants took the opportunity to mock their leaders including one where the Polish TV host, Jacek Bromski, joked that Moscow must be asleep when his call to collect their votes was met by an unanswered phone, much to the enjoyment of the Polish audience.

The rise of Solidarity in 1980 and the unstable political situation at the time saw the end of Interwizja and there were no festivals held between 1981 and 1983. The Sopot Festival returned under the guise of the Sopot Music Festival Grand Prix in 1984 and over the next 15 years it continued under various names with the post 1989 period seeing it become an opportunity for Poles to see stars from the west perform to appreciative new audiences. The prize was dropped completely for a number of years from 1999 to 2004 as the Festival saw acts who would previously have performed in the interval take over the show and artists such Lionel Ritchie, Whitney Houston, Bryan Adams and Ricky Martin all appeared.

In the years before the Forest Opera was closed for redevelopment the festival was given a new lease of life as the country’s largest independent TV channel TVN took over the organisation and international stars like Elton John, the Backstreet Boys and Simply Red all performed but with new venues and festivals being launched around the country and major international stars now appearing regularly throughout Poland, the festival lost a lot of its magic.

For many Poles though the Sopot Festival is still a traditional part of the summer season and while there is now more competition, not least from Sopot’s own Ergo Arena which saw Lady Gaga appear in 2011 and neighbouring Gdynia’s hugely successful Heineken Festival , the hope is that the re-developed venue will also give the festival a new impetus and return it to being the country’s premier music event.

The Forest Opera today finds itself once again as a top-class venue for concerts, theatre and opera. The 74 million PLN redevelopment managed to maintain the wonderful setting and layout while bringing the venue into the 21st century with modern seating, excellent facilities for performers and directors and a state of the art sound and lighting system. The centrepiece of this development is the installation of a system allowing images to be projected onto a special screen included in the new roof construction which is suspended 32 metres above the audience. Seating has been increased to over 5,000 places and the redevelopment not only allows for audiences to enjoy performances for 2 months more each year than previously but it also allows for performances to be staged more often as the building and dismantling of sets can be done much quicker than before. The Forest Opera is now far more suitable for the needs of the disabled after the redesign increased places from 4(!) to 100 with the installation of a lift and a specially developed viewing platform.

In Your Pocket would like to recognise the information gathered from BART Sopot and a fascinating piece by the BBC’s Steve Rosenberg in producing this feature.
Philharmonic

ul. Moniuszki 12, Sopot
/sopot/forest-opera_39583v
The Forest Opera is a wonderful open-air arena set in a hollow in the forests surrounding the city in a western district of Sopot. With a history going back to …
see more