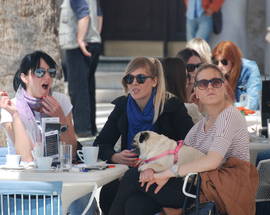 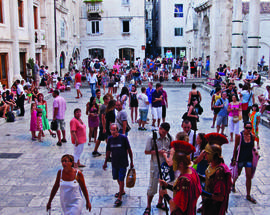 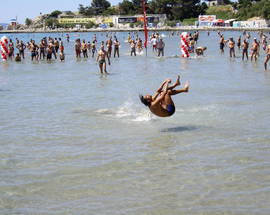 Among the numerous beaches around the city, there is one, final name that sums up a true beach experience in Split: Bačvice. The city’s main public beach is an integral part of the lives of the people of Split, and understandably so. Just minutes from the city center, Bačvice is a tree-lined beach complete with bars, restaurants and cafés and marked by the blue flag that is so often spotted around Croatia, signifying that the water and environment surrounding the beach meet stringent international quality standards. But more than the natural aspects of the beach, Bačvice is beloved because of the large place it holds in the overall fabric of the city's life. It is easy to imagine the various parts of the drama of a Split resident’s life taking place on this small strip of beach: clumsy baby steps on the sand, learning to swim for the first time, romantic walks along the beach and, most importantly to some, games of the ubiquitous picigin played with groups of rowdy friends. It is perhaps picigin, a sport that was invented right in the waters of Bačvice that is the perfect illustration of the attitude and overall feeling that exists at this special beach. The sport is played by small groups of people who try, by only using single touches from their their hands, to keep a specially-made rubber ball aloft and out of the water for as long as possible. The main characteristic of the sport is that there are no opposing teams, no points, no winners and no losers. It is played for the sheer pleasure of being with one's friends while running and diving through the shallow waters of Split's most beloved beach.

The Inhabitants of Split

To the outside visitor, the citizens of Split – referred to as Splićani – are one distinct group of people. There are, however, a few distinct groups that exist in the social landscape. The first, and oldest, group of people are the fetivi, the people descended from Split's old urban families. They are characterized, stereotypically, by their unique way of talking, which is considered to be very fast. Split’s fetivi are complimented by the boduli, people originally from the islands of the Adriatic who, again stereotypically, have a reputation for frugality, quick thinking and keeping to themselves. Relatively recently, these two groups were joined by the vlaji, who migrated to Split from other parts of Dalmatia and now populate the high-rises that encircle the city. The vlaji are the rough and tumble survivors, accustomed to hardships and the rougher side of life. The distinctions between these groups, however, are fading fast, especially considering the arrival of the latest social group to emerge in Split, namely an influx of immigrants from Hercegovina who came seeking a new life in Croatia’s second largest city.

The history of the early part of his life is rather fuzzy, but Diocles (also Diocletian in English) is believed to have been born in about 244 near Solin, 8km away from present-day Split. Diocletian was Roman Emperor from November 20, 284 to May 1, 305 and, by establishing a strong autocracy and strengthening the military, brought an end to the period of the Roman Empire known as the "Crisis of the Third Century."
One of the many distinctions of Diocletian's rule was the creation of the Tetrarchy, which is generally credited with ending the aforementioned Crisis of the Third Century. To distribute power and authority more evenly, Diocletian initially named a co-emperor, Maximian, to look after affairs in the Western regions of the Empire. In 293, desiring even more focus on civic and military matters, two more Caesars (junior emperors) were named, with each leader operating out of their own capitol on the frontiers of the Empire.After twenty years of rule, Diocletian and Maximian abdicated power. Newly-appointed Tetrarchs quickly made the system of rule a formula for civil war, and this unique form of government collapsed. Diocletian saw his friends and allies turn against him and each other, with Maximian even forced to commit suicide. By this time, Diocletian was in his elaborate retirement palace that he had had constructed, the ruins of which form the core of the old town of modern-day Split. On December 3, 311, after a tumultuous life as the leader of the Roman empire, Diocletian died.

Ask a Croatian where to go to see the most beautiful women and most will point you directly to Split (even the bitter females of the population). A strange and nearly mystical aura surrounds these creatures, and indeed the world fashion industry makes no secret of this locales rare ability to produce goddesses. They are known especially for the combination of amazing height, ample bosom, brilliant Mediterranean Slavic features and a scorn for writers of city guides