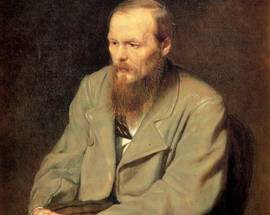 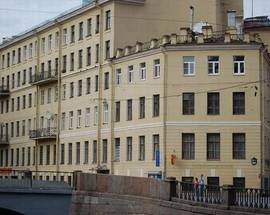 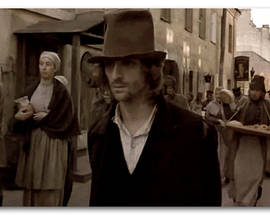 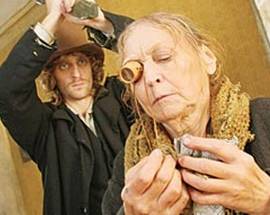 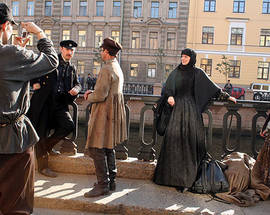 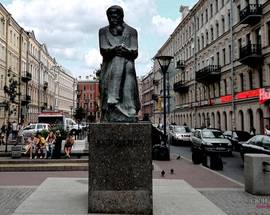 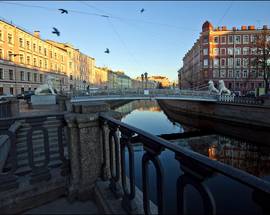 ‘You seldom come across places that have so many gloomy, harsh and strange influences on the soul of man as there are in St. Petersburg. The mere influences of climate means so much. And it’s the administrative centre of all Russia so its character must be reflected on the whole country.’

Despite the fact that the tour of ‘Dostoevsky’s St. Petersburg’ is mostly attended by lovers of the writer’s work, students and teachers, it is interesting for a wide range of people, even those who know little of Russian literature. After all, the program takes you to houses in which Dostoevsky and his characters lived, as well as ancient temples, former brothels, beer halls, famous shopping streets and beautiful squares. Along with the entertaining descriptions and stories given by the tour guide, you will discover a vivid picture of middle-class life in St. Petersburg in the 19th century.

The city offers a large number of different Dostoevsky tours, varying in focus, length and format of the tour. The main thing to consider is to choose the tour that’s right for you. After looking at different programs available on tour agency websites, we’ve opted for a four-hour walking tour, which we believe is the most comprehensive, covering several areas of the city, including the Alexander Nevsky Monastery, where Dostoevsky is buried. As well as that, we feel that a walking tour allows you to gain a better sense of the how the characters lived in the writer’s imagination. If the weather is clear and sunny, is there really a better option?

The tour begins on Rimsky-Korsakov Avenue (which was known as Ekateringofsky during Dostoevsky’s time). We met with the guide in the lobby of the four-star Ambassador Hotel, on pr. Rimskogo-Korsakova 5. We went directly to house number 3 where the writer once lived. Set in a courtyard typical of St. Petersburg, the house, particularly in contrast with the hotel, looked especially dull.
After looking at the sacred window on the third floor, we continued. The main districts of Dostoevsky’s ‘Crime and Punishment’ are considered to be between Sennaya pl. (Haymarket Square) and the Griboedov Canal and the area around Vladimirskaya pl. (Vladimir Square).
As we crossed to the other side of the canal, an elderly man, who as it turned out, was a neighbour of the people who currently live in Dostoevsky’s apartment, approached us. Upon hearing that we were talking about Dostoevsky, the elderly man made a clarification, as if knowing our guide would not have told us. He explained that in fact, Dostoevsky lived in another house, but this one was built in its place. A
line from Crime and Punishment came to mind, “With a sinking heart and a nervous tremor, he went up to a huge house which on one side looked on to the canal, and on the other into the street”.

It seems in this excerpt from ‘Crime and Punishment’ that Dostoevsky was describing the house of the old moneylender, which was located on the waterfront of the Griboedov Canal, number 104, in close proximity to the writer’s house. In general, Dostoevsky often described the homes of his characters to be near to his own, and in one instance described his own house. The conditions in the houses, and the dark, inner world in which the characters lived, often contrasted with the clear sunshine of St. Petersburg. Therefore, for this tour we had to try to use our imaginations to replicate the writer’s artistic license. Imagine inhaling the fresh scents from the river, then almost suffocating from the unbearable stinking smell in the hallway where the old woman lived. From there we went to the apartment on the 4th floor, in which the murder in ‘Crime and Punishment’ took place, which is now home to a young family. The scene
of the crime is now a child’s room, with coloured wallpaper and toys. We did not bother the family who lived there, and continued on our way.

We then walked along the Griboedova canal to Sonya Marmeladova’s house, examining features of the architectural style of the homes we saw on the way. During the time of Dostoevsky, there was a direct correlation between how the houses looked, and how much money the owners had.
If you look closely at the houses, you can see how each former owner sought to stand out, to outdo their neighbours, as much as they could afford to. Yet, in spite of its modern exterior, the tourists are most curious about number 73, believed to be the home of Sonya Marmeladova (according to researchers). However, the exact address of the heroine is not stated in Dostoevsky’s novel. There is also a theory that Sonya lived at Kaznacheiskaya ul. 7. The highlight of the walk however, was perhaps the next house we visited. Next to it stood a group of tourists and a couple of curious onlookers. It was not possible to enter the house but some people were waiting to try to slip into the building if they had the opportunity. One can only imagine how the residents might feel. Some, perhaps, enjoy the attention, especially when it is that of foreign tourists!

As you may have guessed, Rodion Raskolnikov, perhaps the most famous of Dostoevsky’s characters lived here. “At the beginning of July, during a spell of exceptionally hot weather, towards evening, a certain young man came down on to the street from the little room he rented from some tenants in S- Lane and slowly, almost hesitantly, set off towards K-n Bridge” as begins Dostoevsky as he opens the novel.

Dostoevsky himself lived in this area for a long time, only moving house from number one to seven to nine on Kaznacheiskaya ul. (which in those days was known as the ‘Little Bourgeoisie’). Here he wrote ‘Crime and Punishment’, ‘The Player’ and ‘The House of the Dead’. Editorial board meetings for the ‘Time’ magazine which Dostoevsky and his brother published, were also held here. And the fate of the number one Treasury Street? It is now a little three-star hotel, known as ‘House of Dostoevsky’, simple but popular with tourists.

The next destination was the Sennaya pl. (Haymarket area) - a hot spot in St. Petersburg during the 19th century. Raskolnikov often wandered about there and the image of shops, pubs, B&Bs and brothels appeared in our mind as our guide described them. The Church of the Saviour also stood for a long time here but it was destroyed in 1961 and plans to restore it have not yet been put in place. In its place now stands the Saviour metro station. We went from there through Vladimirskaya pl. district, passing the square’s main architectural attraction, which is of course the Cathedral, which Dostoevsky often visited. Just a few steps from there is the final house of Dostoevsky. Our tour guide told us Dostoevsky liked renting houses near to churches and cathedrals, and we were led to number 5/2 Kuznechny per. to see the apartment.

Although a detailed tour of the museum in Dostoevsky’s former house is not included in the programme, we advise you to visit it all the same. It will definitely not leave you feeling indifferent! You can learn things about what kind of father Dostoevsky was, what kind of husband he was, what habits he had at home. The guides at the museum are always able to surprise you with unusual stories and facts. In the apartment, you can still find many of Dostoevsky’s own possessions, such as his hat, his writing utensils, a note written by his child addressed to Dostoevsky himself (complete with spelling errors). By removing twenty layers of wallpaper, restorers were able to uncover the original wallpaper. Now the apartment looks almost exactly as it did at the time the writer lived there, until his death on February 9th, 1881. Fyodor Dostoevsky was buried at the Tikhvin cemetery of the Alexander Nevsky monastery, along with Tchaikovsky, Mussorgski, Kuindzhi, Krylov and other greats of Russian culture. It was near to the monastery that the tour came to an end.
We would like to take the opportunity to thank our wonderful guides for the tour of St. Petersburg.

Tours are conducted in Russian, English, French, German and Spanish. The cost depends on the number of people in the group. Whether you are visiting St. Petersburg for a night or a month, you should stay in a hotel which lets you make the most out of your visit. We have a selection of hotels ranging from luxury five star hotels to boutique mini-hotels filled with charm. You can find out where these hotels are located and what market they cater to. The traveller looking to stretch their budget will appreciate the centrally located hostels and dormitories just as much as the high flying business executive who is looking for a quiet place to unwind after a hectic day of negotiations and cultural programmes.
Russian writers

Kuznechny per. 5/2
/st-petersburg-en/fyodor-dostoevsky-museum_9390v
The museum dedicated to the author of Notes from the Underground dips into the basement, then leads you all the way up. The main attraction here is …
see more
Russian

Kuznechny per. 5/2
/st-petersburg-en/fm-dostoevsky_129400v
F.M. Dostoevsky is an elegant restaurant focusing on home style Russian cuisine. The atmosphere is chic and comfortable at the same time. Candles on the …
see more
Russian

Nab. reky Moiky 82
EDITOR'S PICK
/st-petersburg-en/idiot_9413v
It’s hard to find a place in St. Petersburg that has not been touched in one way or another by the city’s extremely rich cultural and literary heritage. The …
see more
Editor's pick
Churches and monasteries

Nab. reky Monastyrky 1
/st-petersburg-en/aleksander-nevsky-monastery_9793v
Founded by Peter the Great in 1710, this orthodox monastery is the most important in St. Petersburg. The St. Trinity cathedral is worth a visit and so is the …
see more
Churches and monasteries

Vladimirsky pr. 20
/st-petersburg-en/vladimirsky-cathedral_9723v
There are usually crowds of beggars and pensioners selling antiques at the entrance of this striking onion-domed church on Vladimirsky prospekt. The Icons on …
see more
Parks and gardens

Ul. Sadovaya 50A
/st-petersburg-en/yusupovsky-garden_53432v
A wonderful little imperial garden that’s a perfect place to take a picnic made up from items bought from the nearby Sennoi market. You may notice some signs …
see more
Music and Concert Halls

Ul. Dekabristov 37
/st-petersburg-en/mariinsky-concert-hall_35959v
Housed in the former workshop of the Mariinsky Theatre and storage facility for its many sets and costumes, fire ravaged the building in 2003. The original …
see more
Art museums

Nab. reky Moiky 94 (entrance from Ul. Dekabristov 21)
/st-petersburg-en/yusupov-palace_9394v
This palace was purchased by the wealthy Yusupov family in 1830 to house their art collection and retains an aristocratic atmosphere. It also was the scene of …
see more
Science and technology museums