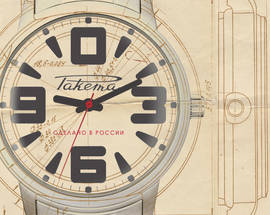 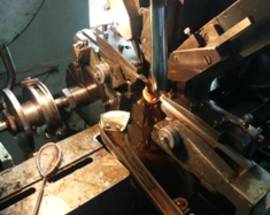 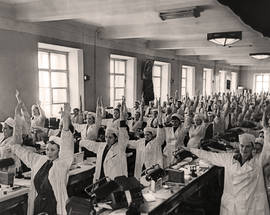 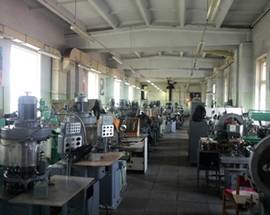 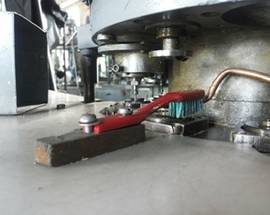 Raketa is not only the oldest factory in Russia, but also the only watch factory in the whole country. Furthermore, it is one of the only watch factories in the world, the only others being Rolex and Swatch, that manufactures its own parts; including the hair spring, balance wheel, and escapement.
It was founded in 1721 by Peter the Great, as the Peterhof Lapidary Works, to make hard stone carvings. The factory produced items made with precious stones for the tsar and his family. After the outbreak of the Patriotic War of 1812, what had become the Petrodvorets watch factory was reorganised to supply the Russian army with essential equipment, including weapons. The factory also provided the stones for Lenin’s Mausoleum, and the famous red stars which you can see on top of the towers of the Kremlin.
The factory began manufacturing watches in 1949 under the name Zvezda (star) and Pobeda (victory). In 1961, Yuri Gagarin made the first manned flight into outer space in the rocket Vostok 1 and the factory chose to commemorate this by renaming the brand Raketa (rocket).
After a break of a few years, the factory began to be reorganised in 2009, with the help of Swiss engineers. The factory now employees just 60 workers, (originally there were around 6,000), who still use the enterprise's original buildings. The factory purchased modern equipment from the Swatch group in 2011, which highly improved the quality of its watches, although they still use a range of Soviet machinery which are indispensible to the watch-making process. An ex-Rolex production director joined the team in 2012, planning to pass on the Swiss standard certification “Chronofiable” and “COSC” to the company. In 2013, Raketa launched its new “Automat Raketa”, as well as the long-awaited new watch design by famous model and actress Natalia Vodianova.
Raketa watches were produced primarily for the army, and their watches are therefore tailored to the individual needs of this type of work. The ‘Seaman’ watch, for example, has a 24 hour dial, divided into parts according to three watch systems: Russian, British, and Scandinavian, and is decorated with marine cardinal buoys and International Marine signal flags. It features an integrated solar compass, and a double time system, which is very useful when sailing around the world. The ‘Traveller’ watch was inspired by Russia’s vastness, and features all of the country’s eleven time zones. Other interesting watches include the ‘Eternal Calendar’ watch, which allows the user to look up any date and discover which day of the week it will fall on, and the traditional ‘Gorbachev’ watch, which features a 0 instead of a 12. Foreign journalists questioned this unique concept, to which Gorbachev’s reply was: ‘in Russia, we start again at 0’.
Since most watches were produced for the Communist Party and affiliate organisations, which were mostly made up of men, there are few watches designed for women. These include the ‘Ballerina’ watch, which was inspired by the renowned Russian ballet, and features red stars on its face reminiscent of those on the Kremlin; and the ‘Winter’ watch, which was inspired by Russian folk tales.
The factory also manufactures watches to commemorate special events and occasions. In 2012, a limited edition ‘Borodino’ watch, featuring an eagle, a symbol of the Russian Empire, on the face, was created in order to celebrate the 200th anniversary of the Great Patriotic War. The factory also designed a watch for the Sochi Winter Olympics in 2014, with a different sport represented at each hour.
The factory offers free tours (available in English) of the factory, which is located near Peterhof Palace. Visitors can look at the machines used in the watch making process, learn some of the factory’s history from the workers themselves, and see the watch models; which make great souvenirs of your time in Russia.
All the Raketa watches can be purchased online or in special stores all over the country.
Russian brands

Peterhof, Razvodnaya ul. 2
EDITOR'S PICK
/st-petersburg-en/grand-palace-in-peterhof_64289v
The Grand Palace at Peterhof was designed to be the centerpiece of Peterhof. Beige and white, the palace is majestic without being overwhelming and provides …
see more
Editor's pick