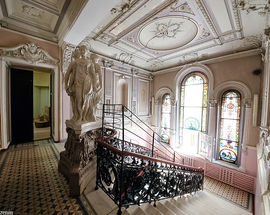 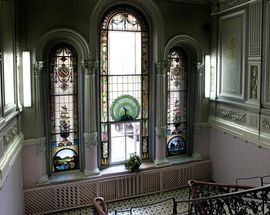 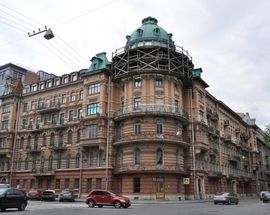 Just a few minutes away from Smolny Cathedral, Dernov Financial House was built between 1903-1904 and ever since then it has been lovingly called the “House with the Tower”. The first resident was poet V. Ivanov and his wife, also a writer, so if the walls could talk, they would tell many tales of the different famous cultural figures who would come visit, such as A. Blok, V. Bryusov, K. Somov, V. Meyerhold, A. Akhmatova and Maxim Gorky. In 1918 the first floor of the house was converted into an art school until the start of WWII.

The Dernov apartment building was typical of its time, with a range of apartments catering to tenants with differing levels of income. In addition to being a famous poet and philosopher, Ivanov was also one of the main theorists of Symbolism. The subjects he offered his guests for discussion included "Romanticism and the Modern Soul" and "Individualism and the new art", so the “Tower” became a sort of spiritual home for the various talents that gathered there. Today, the building is home to a kindergarten so unless you’re a small child, you can only get a glimpse of the interiors, including several fine stained-glass windows, as part of a guided tour.