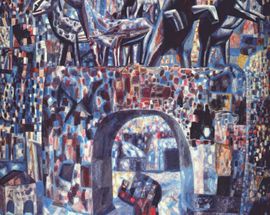 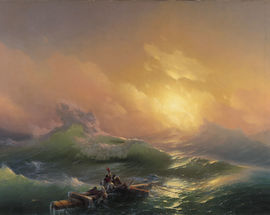 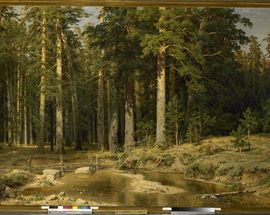 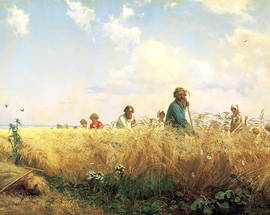 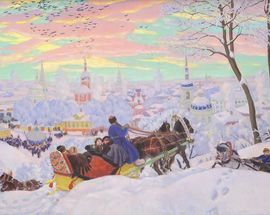 Pavel Filonov “Narva Gates” (1929)
In his painting entitled “Narva Gates” (1929), Pavel Filonov reassesses the image of the new proletariat Soviet hero by substituting the Glory figure with him on the famous triumphal building. The character is weaponless, his arms are waving in the air and his face expresses despair. The horses are blind and have no hooves, while the passersby below comprise an island of an embarrassed and ridiculed humanity, despite the bright and colorful mosaic backdrop. A think blue and crystals so characteristic of Filonov’s work turn into little icicles, which so poignantly convey the feelings of cold and the overall mood of the 1920s in Russia.

Ivan Aivazovsky “The Ninth Wave” (1897)
“The Ninth Wave” is probably Aivazovsky’s best known work. Initially acquired for the Hermitage in 1897, the painting became one of the first works to be included in the collection of Emperor Alexander III’s Russian Museum. The title refers to the nautical tradition that waves grow larger and larger in a series up to the largest wave, the ninth wave, at which point the series starts again. It depicts a sea after a night storm and people facing death attempting to save themselves by clinging to debris from a wrecked ship. The painting has warm tones, which reduce the sea’s apparent menacing overtones and a chance for the people to survive seems plausible. This painting juxtaposes the destructive side of nature with its immense beauty.

Ivan Shishkin "Ship Grove" (1898)
It is a portrayal of surroundings familiar to the artist Ivan Shishkin since his childhood. Ship Grove depicts a right, calm summer afternoon in the forest, brought to life by the artist’s exceptional use of colour.
Look upon Shishkin’s intricate brushstrokes and escape into the towering pine trees glowing in the lingering sun, contrasted to the butterflies fluttering in the foreground. This piece is a dichotomy of both the enduring strength and delicate fragility of nature; truly, it is a testament to the master Shishkin.

Grigory Myasoedov “Harvest Time, Mowers” (1887)
Grigory Myasoedov (1834 – 1911), one of the founders of the Association of Traveling Art Exhibitions, always paid special attention to the life of peasants, their traditions and customs. In a large-scale canvas titled, “Harvest Time, Mowers” (1887), Myasoedov sings to the joyful side of life, finding beauty in peasant labour, its rhythmic, harmonious, almost musical pace. He portrays the rise of work, of united people, of the eruptive blossoming of nature, of the vast expanse of Russian fields, as well as the hopeful character of the village harvest. Many travellers turned their work to the theme of peasants, but only Myasoedov managed capture them in such an optimistic light.

Boris Kustodiev "Shrovetide" (1916)
Boris Kustodiev: the Russian painter, stage designer, and printmaker, created a series of works devoted to Maslenitsa. The celebration of Russian Maslenitsa is like a carnival, and the artist has reflected this in his selection of elements: brightness and a multicoloured landscape in which is felt the proximity of spring, colourful coats, shawls, and carts. Kustodiev loved everything Russian, and his inspiration was all of the items of traditional Russian life: wooden utensils, painted toys, a traditional Russian dress. Most of his works he created inspired by his memories, creating in his paintings the images of a bygone Russian age with its colorful characters living in harmony with Patriarchal customs.

Inzhenernaya ul. 4
EDITOR'S PICK
/st-petersburg-en/mikhailovsky-palace-russian-museum_141314v
The Mikhailovsky Palace is the traditional epicentre of the Russian Museum, built in 1825. Located within the historic centre of St. Petersburg, it is a fine …
see more
Editor's pick