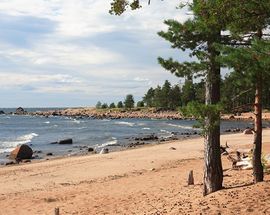 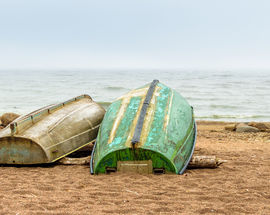 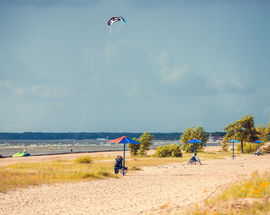 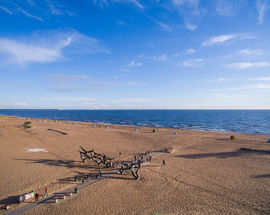 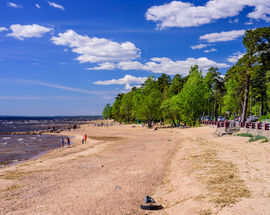 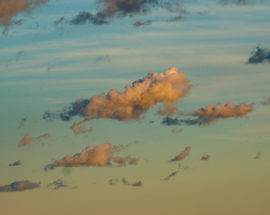 In St. Petersburg, you have many options where you can go to get away from it all for a day or two. One of our favorites has got to be Kurortny (Resort) District, a.k.a. St. Petersburg’s playground to the north.

Beaches stretching along the Gulf of Finland for as long as the eye can see, soothing birch tree forests, modern spa hotels and restaurants serving delicious food means you can really recharge your batteries – without having to go very far at all!
If you don’t have a car, your journey to this area will begin at Finlyandsky railway station and most of the towns worth visiting in Kurortny District are about 30 to 40 kilometers away, meaning that the travel time is quick and painless. Are you ready to go and explore? Here’s our guide to a few of the coolest towns to visit in that area!

Sestroretsk
This is where the resort area really begins! Sestroretsk is located on the shores of the Gulf of Finland, the Sestra River and the Sestroretsky Lake 34 kilometers northwest of St. Petersburg. The name of the town can be translated as “sister’s river” and between 1918 and 1940, the border with Finland was just two kilometres to the north of the town. Though the town itself is quite ordinary, it is home to the delightful Dubki Park where Peter the Great had his summer residence in the early 1700’s.
Sestroretsk is well known in the area as a balneological and climatic resort, meaning that people who are not in the best health can come here and try to remedy themselves by bathing in mineral water. There are many sanatoriums to choose from if you do decide to give your health a little boost. The best known one is the Sestroretsky Resort that dates all the way back to 1898. In addition to being a great health spa, this resort is also incredibly great for lifting any visitor’s spirit thanks to the colorful architecture, statues and a library.
If soaking for hours is not your cup of tea, just strolling by the beach, admiring the tranquil water and breathing in air that’s ionized by the sea and has a smooth smell of coniferous forest will certainly do wonders for your soul. And if it’s your kind of thing, the nearby Dyuny (Dunes) is a popular nude beach.
History buffs should also check out the Razliv Museum Complex. Its exposition covers the period when Lenin, the founder of the Russian Communist party, was hiding from the persecution of the Provisional Government. “Lenin’s Shalash (The Branch Shelter)” displays his temporary hide-out, where he lived masked as a Finnish haymaker, the “Green Study” and various monuments to the Soviet revolutionary leader. The museum hosts a permanent exposition called “Historical Drama: 1917, from spring to autumn”.

Solnechnoye
Formerly known as Ollila while under Finnish rule, Solnechnoye started developing as a popular countryhouse (“dacha”) settlement in 1870 and in the summers, the village’s population would grow to 5,000 people - in the present day the population is just under 1,600 so for those days that was a huge number! It even had its own summer theater, where Maxim Gorky premiered “Children of the Sun” in 1905. Representatives of St. Petersburg’s intelligentsia also gathered here at the start of the 20thcentury.
Solnechnoye, which translates as “sunny”, got its current name in 1948 thanks to its location on the southernmost and highest point of Kurortny District. At the start of the 1970’s, the “Laskovy” (“Tender”) beach was created in Solnechnoye and is still a beloved outdoor recreation spot till this day. During the Soviet times, the beach was visited by many important international government officials, including Charles de Gaulle.
Nowadays, on warm summer days the beach is packed with sunbathers and in the off-season it’s a popular picnic spot. The coastline is quite rocky in certain spots, making it a great place for dramatic nature photography.

Repino
Repino was known by its Finnish name Kuokkala until 1948, when it was renamed after its most famous inhabitant, the painter Ilya Repin. The first mention of Kuokkala was in a peace treaty between the Republic of Novgorod and Sweden in 1323 but development really kicked off after 1870 when the railway linking St. Petersburg and Helsinki passed through the town. Wealthier residents of St. Petersburg built holiday villas in the area and a new railway station was built in 1889. Kuokkala was part of the Grand Duchy of Finland, which had a more liberal environment and thus attracted artists and intellectuals including the artist Ilya Repin. Vladimir Lenin also spent some time in Kuokkala between 1905 to 1907, staying at the Vasa Villa.
In 1899, Repin bought an estate here and called it “Penaty”. He designed it himself and after it had been built several years later, Repin moved to Kuokkala. He would live there until his death in 1930. After the Great Patriotic War (WW2), the area was developed as a tourist area with several hotels and sanatoriums and was transferred to the jurisdiction of the city of St. Petersburg as part of the Kurortny District.
Today, the estate is part of the UNESCO World Heritage and has been a museum since 1940. There is a popular beach, a few restaurants and more than a dozen spas, resorts and sanatoriums - the largest being Sanatorium Repino where guests can go in for everything from medical procedures to showing off their moves on the dancefloor of the disco.

Komarovo
Komarovo is renowned for its sandy beaches and dunes, scots pine, spruce forests and glacial lakes. Its residents and visitors enjoy cross-country skiing in the winter, and hiking, bicycling, fishing, wild mushroom, blueberry and raspberry picking in the summer. Its coastal stretch has been designated a protected zone: "Komarovo Shore Natural Reserve".
Easily reachable from the city by elektrichka train, the settlement became home to many prominent figures in science and culture, members of the St. Petersburg (then named Leningrad) intelligentsia. But real nationwide fame came to Komarovo in the late Soviet period: Komarovo became THE place to get away from it all –  “for a week until the second of the month, I will leave for Komarovo” are the lyrics by Igor Sklyar for his famous song “Komarovo”, an ode to relaxation.
This Soviet crooner was not the first or last of the country’s cultural elite to appreciate the town’s joys. Many artists, writers and academics have spent the warmer months here including composer Dmitry Shostakovich and film director Aleksei German and several were even buried here, such as poet Anna Akhmatova and avant-garde musician Sergei Kurekhin. Akhmatova’s dacha, one of the town’s most famous landmarks is located at Kudrinsky pereulok 3g. Her mentee Joseph Brodsky often visited her here. Other famous names associated with Komarovo include Boris Grebenshchikov, Innokenty Smoktunovsky, Alisa Freindlich, the Strugatsky brothers and others.
Today there are more than a dozen health resorts with several for children, two for St. Petersburg’s cultural elite and the rest oriented towards simple rest and relaxation, as well as a few restaurants that operate on the beach in summer.

Zelenogorsk
Zelenogorsk is the last major settlement within St. Petersburg’s city limits and a stop on the St. Petersburg-Vyborg railroad 50 kilometers from the city center.
Like most of the towns in this area Zelenogorsk was a part of the Grand-Duchy of Finland and was called Terijoki. The ubiquitous Vladimir Lenin managed to travel in secrecy over the internal border to Finland in 1907. Ten years later, in April 1917, he would return through the Terijoki border control at the head of the contingent of Bolshevik exiles that had accompanied him from Switzerland. With completion of the Riihimäki-St. Petersburg railroad in 1870, Terijoki became a popular summer resort, and was frequented by St. Petersburg's upper class until closure of the border during the Russian Revolution (1917). It was finally annexed to the USSR in 1944.
This has been a popular summer destination since at least 1870 and to this day, sunbathers flock to “Zolotoi Plyazh” (Golden Beach) every summer to dip their feet into the cool waters of the Finnish Gulf. A popular yacht club is located here, which also moors smaller vessels at its docks. Around the start of the 21st century, the town's population was estimated to have been a few thousand, rising to above 50,000 in the summer!

So much to see, so much to do! If you feel like just a day trip is not enough, you can spend a night or two at one of these comfortable hotels.
1) Aquamarine Hotel
2) Dom U Morya
3) forRESTmix Club
4) Pervaya Liniya
5) Skandinavia Country Club
6) Staraya Melnitsa
7) Terijoki Resort Hotel & SPA
8) VODA Aquaclub & Hotel.

Hotels outside the city

Zelenogorsk, Primorskoe shosse 593H
/st-petersburg-en/aquamarine-hotel_157555v
Unwind in the town of Zelenogorsk by spending a few days and nights in Aquamarine hotel. Apart from being just a few minutes walk away from the Gulf of …
see more
Hotels outside the city

Zelenogorsk, Gavannaya ul. 1A
/st-petersburg-en/terijoki-resort-hotel-spa_157549v
Terijoki is a sleek resort hotel with a breathtaking view of the Gulf of Finland and your personal invitation to the world of harmony, peace and unity with …
see more
Hotels outside the city

Repino, Lugovaya ul. 10A
/st-petersburg-en/forrestmix-club_157556v
Active holiday enthusiasts, fans of relaxing procedures and gourmets who like to spoil themselves with fine foods – regardless which category you belong to, …
see more
Hotels outside the city

Primorskoe shosse 256A
/st-petersburg-en/voda-aquaclub-hotel_157548v
This is a new form of recreation, combining elements of a SPA complex, water activities for children and adults, fashionable parties, as well as gastronomic …
see more
Hotels outside the city

Sestroretsk, Parkovaya ul. 16
/st-petersburg-en/skandinavia-country-club_157545v
The Skandinavia Country Club & SPA is a living reminder of the glory of the Russian countryside before the 1917 Revolution. Located in the fashionable resort …
see more