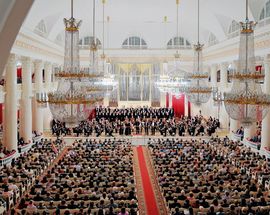 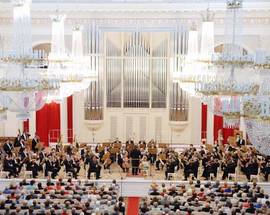 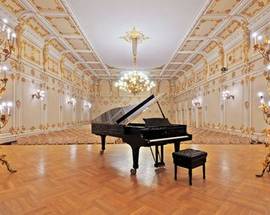 The dazzling white columns and glittering chandeliers mark out the Shostakovich St. Petersburg Academic Philharmonia as quite a space before the music even starts, and having seen some of the finest performers from not only Russia but all over the world since its creation, the venue continues to offer high class performances. Initially known as the Imperial Music Choir, the performances were staged for the Court of Alexander III. By the 1900's, the Orchestra started to give public performances at the Philharmonia and elsewhere in Russia.

The beautiful music is enjoyed in one of the two halls. The Grand Hall is the main concert hall of the St. Petersburg Philharmonia, one of the oldest Philharmonic societies in Europe. It's named after St. Petersburg-born composer Dmitry Shostakovich and is one of the best concert halls in all of Europe! It can fit about 1,500 people and its first-class acoustics continue to delight the world’s leading recording companies.

The Small Hall (Nevsky pr. 30) is a lemon and sugar-colored concert hall, the lesser hall of one of the oldest Philharmonic societies in Europe. But despite its size, it’s grand and cozy all at the same time! Pre- or post-show, indulge your taste buds with traditional Russian cuisine at the Assembly of the Noble Restaurant or, if you’re in the mood for a light Tiramisu, a Danish crumpet with fresh fruits or a cup of cappuccino, make yourself comfortable at Chocolate Café.

25.02.2019
William
DELMAR, NY
My mentor piano teacher was the great Russian pianist, Alexander Borovsky (Borowsky) 1889-1968. Editing his unpublished Memoirs and he speaks of rumor that the Grand Hall having in the ceiling a net of steel wires which enhanced the acoustics. Is this true? He played in the Hall often while teaching at the Moscow Conservatory from 1915-1920. Is this rumor true? Thank you.
Take your guide with you Download a pdf