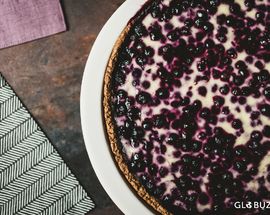 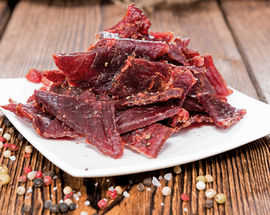 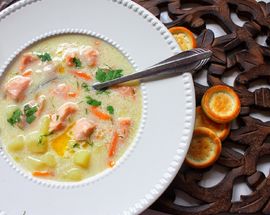 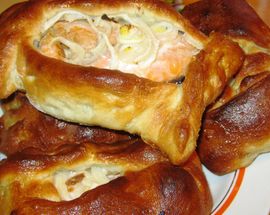 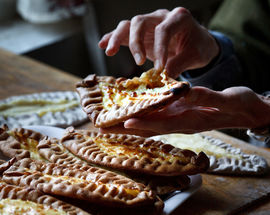 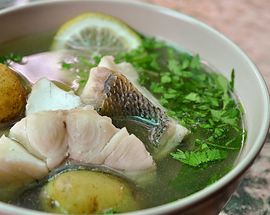 Surviving in the harsh conditions of Russia’s northern regions is something that the indigenous peoples have been doing for centuries. On the one hand, the extremely cold winters and the short cool summer limit what can be grown. On the other hand, these places are extremely rich in forests, rivers, seas, oceans and lakes, meaning there’s an abundance of fish, nuts, berries and other creatures.

Karelia
Apart from the wooden architecture, enigmatic traces of prehistoric civilization and thousands of lakes, Karelia has a unique and delicious cuisine. The region is home to several different ethnic groups – Karelians, Vepsians, Finns, Russians and the Saami – all of whom have made their contribution to local gastronomy.

Karelian food is predominantly baked or stewed (not fried) with little seasoning and has similar features to other cuisines of the Russian North, namely hearty pastries, fish, venison, elk, wild fruits, mushrooms and game. Below you will find some of the dishes that every visitor to Karelia should try.

Begin your meal with some appetizers: the famous stuffed pastry “kalitka” (a small open pie made of rye flour dough with a filling made of millet porridge or potatoes) and some marinated Karelian mushrooms. Move onto the first course, which usually consists of a hearty soup. “Kalakeitto,” “lohikeitto” and “maimarokka” are all Karelian fish soups made of different types of fish. Mushroom and meat-based soups are also common.

The second course can be varied. Lake Onega (Karelia’s biggest lake) contains species of fish like the lavaret, sterlet, lake salmon, trout and brook trout. Traditional baked lavaret or a lavaret baked in rye dough are especially popular options. Vegetarians can also find something to their liking, for example different kinds of kasha (porridge) or vegetable and mushroom dishes heated in earthenware pots. For dessert you must try wild berry mousse with oat flour or pies/pancakes with berries. Don’t leave the table without imbibing some liquid dessert, i.e. one of the sweet Karelian liqueurs made of cloudberries, cranberries, red bilberries or blueberries. If that’s not enough, go for the Karelian balm – a strong 40-degree alcohol drink made mainly of Marcial mineral water and more than 30 infusions of curative plants and berries.

Yamal Peninsula
The indigenous people of the Yamal Peninsula are called the Nenets, who are traditionally a reindeer-herding nomadic peoples. At first glance, the Nenets cuisine might appear more than odd, but these foods have been sustaining human life in one of the harshest climates for generations. Low availability of fire and materials for the production of kitchen utensils has impacted this Arctic cuisine but one thing is for sure: the freezing of foods has never been an issue for the people living here.

The main food on the menu of virtually every Arctic ethnic group is fish and this includes different breeds of salmon, whitefish and pike. While heat cooking was – traditionally – extremely rare, the fish was served as dried, salted or raw. Stroganina is frozen fish or meat, sliced and sprinkled with salt. As a side dish, the Far Northern cuisines use not cereals and vegetables, but local berries, such as cranberries, cloudberries and others.

Despite the low avaiablity of fire, the Nenets cuisine has quite a few soups. The traditional Nenets broth called Evay is made from meat boiled in slightly salted water and another meat soup called Ai is seasoned with rye flour, which makes it rather thick. There is not much in the way of desserts in this region, but young deer antlers are considered a delicacy.

Pomorye
With Arkhangelsk as its de facto capital city, Pomorye is yet another northern region that boasts delicious and hearty fish dishes. “Pomorskaya ukha”, for example, is a soup made of freshly caught fish and is prepared using lemon, bay leaves and pepper – ingredients brought over by English merchants before other Russian regions ever heard of them.

Pomorye’s baked fish dishes are no less famous and are especially common in the form of pies. The “krasny pomorsky Rybnik” – made with salmon – is delicacy served on special occasions, while the normal “Rybnik” is simply pieces of fish baked in dough – but still very tasty. When potatoes reached the north, they became a beloved ingredient in fish dishes.

Other ingredients that are commonly used here, like in many other northern regions, are mushrooms and berries. To overcome illnesses like scurvy that were the usual companions of the northern winters, Pomors created “volozhi” – a berry-wine sauce that was made of cranberry, cloudberry, cowberry or rose hip. You should also try “kyozh”, a hot berry drink that has as many different recipes as there are families in Pomorye and can be made of virtually anything: berries, herbs, grain, etc.

Stolyarny per. 18
/st-petersburg-en/severyanin_90525v
Severyanin Restaurant is aptly named. “Severyanin” comes from the word sever (North), referring to the rich, Northern Russian meat selections on the menu. The …
see more
Ryumochnye

Stolyarny per. 16
/st-petersburg-en/pechorin_158408v
Named after the protagonist of Lermontov’s ‘The Hero of Our Time’ and with drinks inspired by the beloved literary masterpiece, this new concept bar is a …
see more