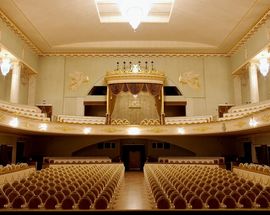 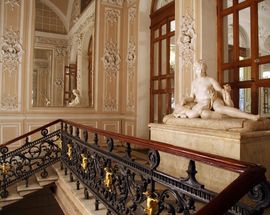 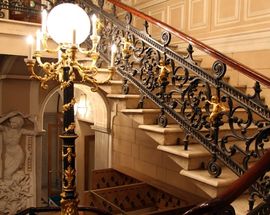 The whole history of the Theater of Musical Comedy is inseparably linked with St. Petersburg and is located in the heart of the city, on one of the most beautiful and oldest squares – Arts Square which was created by the genius Italian architect Carlo Rossi. It all began on September 17, 1929 when two united operetta companies – Kharkov and Leningrad – presented one of the first Soviet operettas (“Holopka” by N. Strelnikov). In those days the theater occupied the building of the so-called National House in Alexandrovsky Garden, before swapping buildings with the Music Hall Theater troupe to the present building.

During the years of World War II, the theater and its company showed unprecedented heroism and courage working in the besieged city throughout all 900 days of the blockade. Light and merry operettas presented citizens and front-line soldiers minutes of rest and oblivion, and belief in approaching victory. The building was damaged due to bombing and was closed for restoration for quite some time. In 1996, the New Small Stage of the theater was inaugurated and soon after the old one was also opened to the public. It looks quite modest from the outside, but a great amount of decoration, velvet and gilding amazes from the inside. Throughout its existence, the theater staged numerous popular operettas.