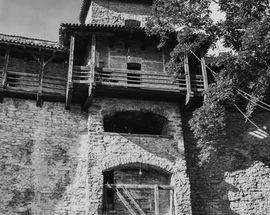 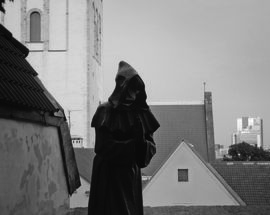 While Estonians are bracing themselves for several weeks of pre-Christmas gloom this season, some Anglo/Irish cultures are getting ready to observe Halloween. And you may have noticed that with winter fast approaching, the Tallinn nights are getting longer and darker. As the light dwindles, parts of the Old Town are starting to take on a mysterious, somewhat forlorn quality.

With this in mind, we decided that this would be a good time to go ghost hunting - specifically, to find out which places in Old Town are associated with spooky stories and paranormal activity. It’s pretty much required for any town as old as Tallinn to have a number of such tales, but while researching the subject we were surprised to learn that, without exaggeration, almost every house in Old Town is reputed to be haunted by some spirit or another. Some of accounts of ghostly activity have taken on the quality of legends, while others, with more recent witnesses, are simply creepy.

If you’re a sceptic, feel free to skip this part and move right on, but if you happen to be walking home late at night through the wrong fog-laden Old Town street and you get that prickly feeling as if someone’s watching you, don’t run screaming to us. What follows is a list of supposedly haunted sites in Old Town. Read on ...if you dare.

If you happen to be standing near the so-called Cat’s Well on Rataskaevu street, look up and house number 16 and you’ll notice something odd - one of the windows on the top floor is bricked up from the inside, and has false curtains painted on the inside. This 15th century house happens to be the subject of Tallinn’s most famous ghost legend, a story called ‘The Devil’s Wedding.’

The tale goes like this: Long ago, the landlord of this house, desperate for money and near suicidal with despair, was approached by a mysterious, cloaked man who offered a huge sum of money to rent the upstairs flat for a party. The renter’s only condition was complete privacy. The landlord readily agreed. During the evening in question, loud noises were heard, as if a hundred guests were tramping up the stairs, and an ungodly racket issued from the room. Precisely at one o’clock, the sound abruptly stopped, as if the party had simply vanished. The next day the landlord ‘s servant, who had been spying through the keyhole, was found mortally ill. Before dying, the servant claimed to have seen the Devil himself having a wedding party in the flat.

For centuries, people passing this house late at night have heard unexplainable party noises, and these only stopped once a later owner of the flat, tired of the complaints, bricked up the window.

Raul Reemet, one of the owners of Sushi House restaurant, which used to occupy part of the building, told us a different version of the story - that it was thundering footsteps on the stairs, not party noises, that were heard through the years. He also said that the window was bricked up for more prosaic, legal reasons.

However, he did inform us that, during the recent, extensive remodelling of the building numerous artefacts were found hidden in the walls, including coins, documents and, in one wall in the back of the restaurant in what’s now the employees’ room, human bones. For this article, we managed to visit the apartment behind the bricked up window and found nothing Satanic - just a comfy, modern living space.

The three neighbouring towers next to the Danish Garden on Toompea all have ghost stories associated with them. One of these, the gate tower at the top of Lühike Jalg street, can be considered Old Town’s most haunted spot, simply due to the number and persistence of reported incidents. Its fame in this regard has made it the subject of several psychic studies and investigations into the paranormal. Sightings have included a pair of monks, a woman in old-fashioned dress, and even a fire-spitting dog. In one version of events, spiritualists in the 1930 contacted the troubled spirit of a monk who had been the town executioner early in life, and couldn’t atone for his previous occupation.

The small, round tower next to the above-mentioned Lühike Jalg Gate Tower also seems to be infested with spooks. It served as a prison for minor offenses in the 16th and 17th centuries. Town records from November 1626 tell of the son of Burgomaster B. von Gerten, who was locked up for something called an ‘engagement offence.’

According to the records, the young man was so afraid of the ghosts that reputedly haunted the tower, that he was given special permission to have his servant accompany him. Both were found pale and extremely shaken the next day, claiming to have been harassed by spirits, and were relocated. In a more colourful version of the story, a sceptical councilman, tired of the prisoners’ complaints about a glowing skeleton that tormented them during their internment, decided to debunk the case by moving the prisoners out and spending the night there himself. Unfortunately, nobody knows what he saw. He was carried out the next morning in a catatonic state, and died a few days later.

In medieval times, this large, square tower at the edge of Toompea served as a prison for prostitutes. Now it’s home to a café, but it seems that its new function has done nothing to convince resident ghosts to change take the hint and haunt a less busy location. Tallinners have long known the tower as a haunted building. Café employees have reported eerie footsteps and scratching noises for years, and there have even been sightings of a monk-like figure in the cellar, who appears to be drinking wine.

As if school kids didn’t have enough stress as it is, the kids at the Gustav Adolf Gymnasium also have to worry about being spooked between classes. This school, located at Suur-Kloostri 16, has the proud distinction of being Tallinn’s oldest, established by the education-minded Swedish King Gustav Adolf in 1631. Earlier, however, this had been the site of St. Michael’s Convent, which began operating back in 1249. The nearby Nunne (nun) street gets its name from this important institution, but it seems the convent has left its mark in another way as well. Through the years, students and staff at the school have reported noises that sound like the ringing of church bells, and spectral figures of women in nun’s habits have been seen moving through the corridors.

Suur-Karja 10, bones in the wall

For centuries, this nondescript house on Suur-Karja had the reputation of being haunted. The house itself is quite old – records of a dwelling house existing on this spot go back to the 13th century. People living here up until the late 1920s claim to have heard strange noises throughout the building, including knocking sounds, scratching and mysterious voices. In 1928, during an extensive remodelling, workers supposedly found a skeleton sealed up in one of the house’s walls. Once the bones were removed and buried, all the noises stopped. Unfortunately, now residents of the building have a different variety of night-time disturbance to contend with - the location houses the Can Can Room, a sketchy, 24-hour strip club.

Hueck House, the monk and Margarete

The house located at Lai 29, known as the Hueck House, is associated with a number of ghost stories. In the 1930s, people living there often heard sounds of someone shuffling through the house and making knocking noises. One account tells of servant being hit on the legs by an invisible force, another of a man’s face peering from inside a wall. Most tales relate to the ghost of a monk that was supposedly walled up in the house. This belief is probably based on the true story of Johann von Hilten, a radical monk who lived here in the 15th century as the guest of Hermann Greve, a merchant and alderman.

In 1464, with a plague raging through Tallinn, Hilten caused a stir by secretly performing a marriage ceremony for Greve’s stepdaughter, Margarete, to a tradesman from Bremen, against the family’s wishes. To complicate matters, during his stay, Hilten had himself fallen in love with the young Margarete, and wrote her passionate love letters in his own blood. Apparently not charmed by this gesture, she rejected him, but he got revenge by convincing Greve to cancel her dowry and revoke the lease on the house he’d given to Margarete’s husband.

If there is the ghost of a monk in this house, it’s probably not Hilten. He was imprisoned by the Catholic church and actually died in Eisenach, Germany. Some believe it’s Margarete’s ghost that haunts the house. A more recent account tells of loud noises on one particular staircase in the house. This is supposedly where someone was killed in a sword fight long ago.

It’s somewhat fitting that the City Museum, which takes such great pains to chronicle Tallinn’s past, is also home to a ghost. The building on Vene 17 that houses the museum is a rambling, 14thcentury dwelling house. According to Professor Mäeväli, a historian from the museum who helped us research this article, a number of sightings here of a ghostly woman in white were reported by staff throughout Soviet times.

In one apartment of this house near the corner of Uus and Olevimägi streets, the figure of a man dressed in black appears from time to time for no apparent reason. He doesn’t say anything, seem benign, and simply observes.

Toomkirik chancellery, the knock of death?

According to the above-mentioned Professor Mäeväli, the chancellery of the Dome Church, which is housed in a separate building on Kiriku behind the church itself, has a creepy belief linked with it. From time to time, an unexplained sound of knocking is heard in the building. Whenever that happens, locals believe, someone inside is about to die. We have absolutely no documentation for this one, but the idea itself was so disturbing we thought we’d share it with you anyway. Pleasant dreams. 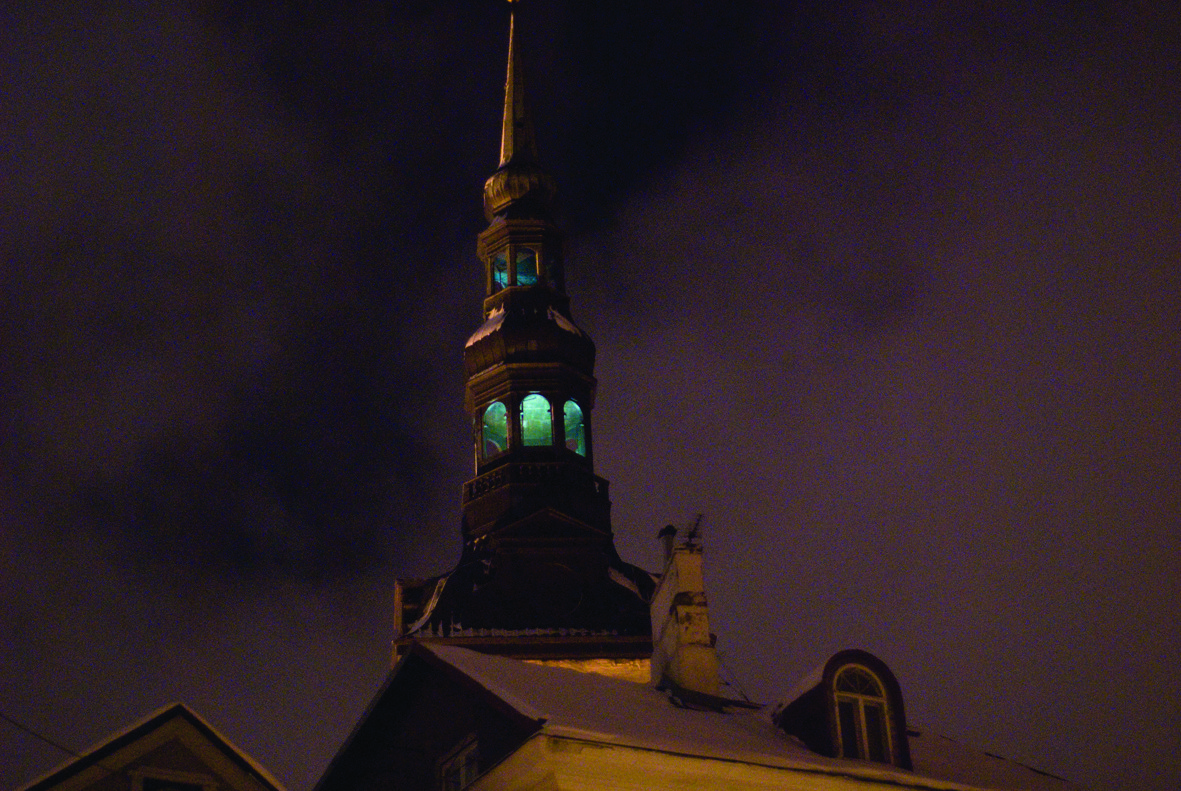 Believe it or not, Old Town actually has a street named for ghosts. Vaimu (Ghost) street between Pikk and Lai first showed up in 17thcentury records with the German name Spukstrasse. In Russian it was called Strashnaya ulitsa (scary street). It’s not clear why residents believed the street to be haunted, but we do know that at one point they objected when the town governor wanted to change the name to ‘Evil.’ During Soviet times, anti-superstitious officials renamed it ‘Vana’ (Old), but the original name was restored after independence.