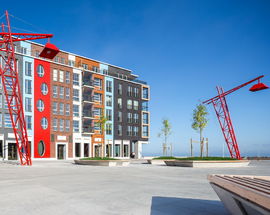 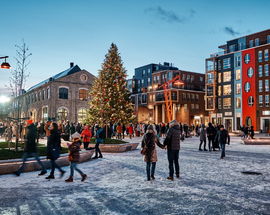 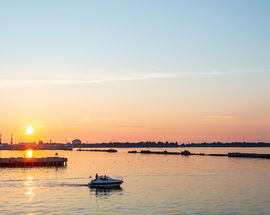 Just past the fascinating Seaplane Harbour, and Patarei Sea Fortress and former prison, Noblessner is quickly continuing the development of the seaside in Kalamaja.

The historic submarine shipyard is now home to new apartment blocks, offices, and a growing number of galleries, restaurants, bars and shops.

Noblessner dates back to the early 20th century, when Tsarist Russia and Peter the Great began building up their navy in anticipation of war. Though the original plans of a war harbour were never completed, a huge submarine shipyard, named after Emanuel Nobel, nephew of Alfred Nobel, and his business partner Arthur Lessner (hence Noblessner), was built.

The shipyard was famous for its submarines, built for the Russian Empire, but when Estonia gained independence in 1918, Noblessner was declared bankrupt and split between several smaller companies, which began manufacturing smaller ships due to lack of larger orders. During the Soviet period, Noblessner was renamed Factory Number 7 and was used to repair submarines and other ships damaged in World War II.

After Estonia regained its independence in 1991, the shipyard remained active for a decade, with the last vessels built as recently as 2018. Since 2009, the Noblessner Marina and Noblessner Yacht Club and Sailing School (NYCS) have also operated in the area.

Today, Noblessner is flourishing, but it’s far from completion, with building and renovation work expected to continue until the end of the 2020s.

The impressive Shishi store is packed full of inspiring decor for the home. On a smaller, but no less stylish scale, Kalhoj sells Scandinavian-style kitchen and dining room accessories. Treat yourself to jewellery at Baltic Brilliant or pamper yourself at Biomarketi Ilu- ja Tervisetuba, which offers ecological manis, pedis, and facials.

Eating and Drinking in Noblessner

You’ll find something for every taste and budget at Noblessner, including one of Estonia’s top restaurants (according to the White Guide Nordic). 180° is run by Michelin-starred chef Matthias Diether, so you can expect no less than an unforgettable gastronomic experience. Craft beer enthusiasts will not want to miss a visit to Põhjala Tap Room. For something quick and casual, head to Patarei Burger for a satisfying burger, or some of their tasty ‘loaded’ fries. Speaking of loaded, the bottom floor of the Kai Art Centre plays host to a plethora of eateries, bars and cafés. Here you can find the unique Japanese restaurant Kampai owned and chefed by a master of Japanese cuisine. A sushi bar, grill and a replica street bar complete the experience. Another fantastic eatery located under the same roof is the Nordic-style LORE bistro, brought to us by the same duo behind Leib Restaurant in Old Town, it is all about 'hygge' here, understated elegance yet very cosy at the same time. On the opposite end of the spectrum, the more adventuresome will want to check out Kaif Bar, a new breed of bars, where hedonistic pleasures and delicious delights await one, or more here. Suhkrukringel is a delight for any and all 'sweet-teeth'. The edible works of art found here are divine. From Thursday to Saturday in the evenings, you can visit gastro lounge Samovar. For those that are looking  for a later, bass and Red Bull kind of venue that is open until the wee hours of the morning, head to Hall, a Mecca for underground, electronic music.

Art and culture in Noblessner


Tallinn In Your Pocket Summer 2020