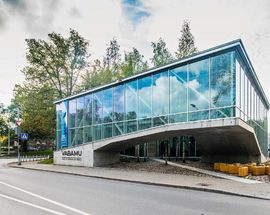 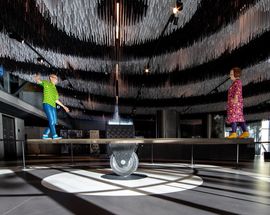 In the period from 1941 to 1991, Estonia was occupied briefly by Nazi Germany and then for four and a half decades by the USSR. The history of this difficult period comes to life in this modern museum on the edge of Old Town. After extensive renovations, this now, state-of-the-art museum has reopened with a new permanent exhibition ‘Freedom Without Borders’, which looks at occupations, resistance, restoration, and freedom from five different perspectives: crimes against humanity, Estonians in the free world, life in Soviet Estonia, the restoration of independence, and finally - freedom. The exhibition can be self-explored or guided by an entertaining, e-tour guide, available in nine languages (Estonian, Russian, English, Finnish, German, French, Spanish, Latvian, Lithuanian). The fascinating exhibits are punctuated by personal possessions from those that escaped, lived through or were exiled to Siberia during the occupation – bringing a very human element to the situations they faced and how they coped with them. Their stories are also told here, often in their own words, which truly bring their experiences to life. Vabamu also has a special exhibition tailored for children, where different stories are told for different age groups.

Pagari 1 (entrance on Pikk 59)
featured
/tallinn/kgb-prison-cells_7298v
The unsuspecting facade of Pagari 1 in the Old Town hides a dark past that once was the KGB Prison Cells in Tallinn. The former KGB headquarters building has long been a symbol of the former Soviet oppression in Estonia. In the basement, suspected ene
see more
Featured

Hello Naphtali, We recommend to ask about these lists from Estonian Institute of Historical Memory http://mnemosyne.ee/en/.
05.12.2017
Naphtali
Bar Ilan
Hello, Is there an archive in Estonia with the names of all the prisoners who were in labour or concentration camps during the second world war? Thank you.
23.07.2012
Lance Grundy

This museum about the so-called Three Occupations of Estonia Soviet-Nazi-Soviet should definitely be on your itinerary of things to see while you are in Tallinn. In my opinion it’s not nearly as good as the far more comprehensive Occupation Museum in Riga but is definitely worth half an hour or so of anyone&#039;s time. Wholeheartedly agree with the reviewer below that the on-line documentaries available via the museum&#039;s website are well worth a look. The museum shop also stocks a decent range of books and DVDs covering the period including an excellent book about life in Estonia under the Soviet occupation called "Memories Denied" by the Estonian author and director Imbi Paju.
21.07.2012
Bruce Patterson

The English website offers a full view of the inventory as well as online access to the excellent documentaries that say it all.The entrance fee is €4 not 2 as stated here; I would highly recommend watching the documentaries online!
Take your guide with you Download a pdf