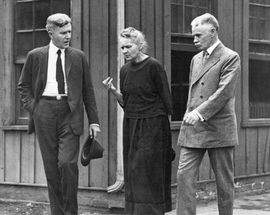 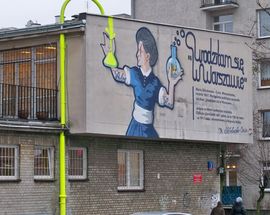 Poland has produced its fair share of barrel-chested, mustachioed historical figures over the centuries – one lap past Warsaw’s many statues and monuments will attest to that – but what about the fairer sex? Look no further than Warsaw’s own Marie Curie, a two-time Nobel prize winner and pioneer in the world of science. Born Maria Salomea Skłodowska on November 7, 1867, she lived in what is now the New Town of Warsaw (her birthplace at ul. Freta 16 now houses a museum about her life) in the Russian partition of Poland. As the fifth and youngest child of teachers Bronisława, who operated a well-regarded boarding school for girls, and Władysław Skłodowski, who ran two schools for boys, Skłodowska was born into a home that put a high value on education. Tragedy struck with the loss of her sister Zofia to typhus and subsequently her mother to tuberculosis when Skłodowska was 12, but her focus on academics remained consistent and she graduated from a girls school in 1883.

Striking a deal with her older sister Bronisława, Skłodowska promised to help with financial assistance while Bronisława pursued her medical degree in Paris in exchange for the same kind of assistance when Skłodowska wanted to seek an advanced degree. That meant Skłodowska had to take a position as a governess to earn the necessary income to support Bronisława, which is how she ended up working for relatives of her father known as the Żorawskis. As fate would have it Skłodowska fell in love with the family’s mathematician son Kazimierz, but his parents rejected the idea of a union between the promising scholar and Skłodowska due to her family’s poor financial standing. Out of a job and with a broken heart to boot, Skłodowska found another governess job in Sopot before returning to Warsaw in 1890.

While living with her father and pining for Żorawski, Skłodowska began her scientific education, moving between the secret Flying University (the Russian occupation of Poland meant strict limits on Poles gaining higher education, especially for women, which lead to the creation of this clandestine institution to teach Poles on the sly) and a laboratory run by her cousin. In 1891, thanks to encouragement from her sister in France and definitive word from Żorawski (who would go on to have a distinguished math career in Poland) that their union could never be, Skłodowska moved to Paris. She enrolled at the Sorbonne, tackling subjects like physics, chemistry and mathematics during the day while tutoring other students in the evenings to make ends meet. In 1893 Skłodowska earned a degree in physics, which she followed up with a degree in mathematics in 1894.

Around this time Skłodowska crossed paths with Pierre Curie, an instructor in the School of Physics and Chemistry – ironically, their mutual interest in magnetism is what brought the scientifically-minded duo together. Though Skłodowska hoped to continue her career in Poland, a rejection by Krakow University due to her gender meant she was now committed to Paris and Curie, who she married in 1895.

While Skłodowska and Curie had two children together (Irene in 1897 and Eve in 1904) her life revolved around the lab and her research. Following up on the work of Henri Becquerel, who discovered that uranium salts emitted radiation, Skłodowska and Curie worked together to study the radiation phenomena in other compounds. Skłodowska discovered that regardless of the form a compound took (powdered, solid, etc) the strength of its radiation depended entirely on how much uranium it contained, and Skłodowska coined the term 'radioactivity' to describe how much radiation a compound emits. Upon working with the mineral pitchblende Skłodowska discovered that its radioactivity could not be accounted for solely due to uranium – which meant it must contain another radioactive element. Before long the husband and wife team published papers in 1898 announcing that their research had led to the discovery of two new radioactive elements: polonium, which was named in honour of Skłodowska’s homeland, and radium, which earned its name from its radioactive nature.

Maria Skłodowska Curie’s discovery of two elements, radium and polonium, was so monumental that it landed her a Nobel Prize and unending fame in the scientific world. But what exactly are these two elements? You may be able to spot them on the periodic table of elements, but can you pick them up in the store? Not exactly. Both radium (symbol Ra, atomic number 88) and polonium (symbol Po, atomic number 84) are wildly radioactive and hard to come by in nature. Polonium was lovingly named after Skłodowska Curie’s native country and is exceedingly rare – you’ll find just 100 micrograms per ton of uranium. Its uses are varied, ranging from a neutron trigger for nuclear weapons to anti-static brushes for removing dust from film. Yet Polonium is probably most well-known for its role in the highly publicised 2006 poisoning of Alexander Litvinenko, a former KGB officer living in London who was the first confirmed victim of Polonium-induced acute radiation syndrome. The former spy unknowingly ingested 10 micrograms of the substance, 200 times the median lethal dose, during a meeting at the Millennium Hotel with two other former KGB agents. Following three weeks of severely debilitating symptoms Litvinenko died, and to this day no one has been charged for the crime. Radium lacks the dead spy storyline but has similarly varied applications: it is used in the manufacture of medical equipment (calibrators, for example), as a treatment for cancer, and as an ingredient in self-luminous paints. Once upon a time it was an additive in food due to its reputed curative powers, an idea that quickly passed thanks to the element’s seriously adverse health effects.

The groundbreaking radiation work of Skłodowska and Curie landed the duo, along with Becquerel, the Nobel Prize in Physics in 1903 (the same year Skłodowska earned her doctorate). The award also made the couple famous, with the Sorbonne allowing Curie to establish a laboratory with Skłodowska as the director of research. Sadly the husband and wife didn’t have much time to enjoy their success; on April 19, 1906, Curie was killed when a horse-drawn carriage struck him as he crossed the street. A distraught Skłodowska was subsequently awarded Curie’s professorship at the Sorbonne’s physics department – making her the first woman to be a professor at the famed university – and granted full authority over the lab.

Despite the loss of her husband Skłodowska continued her research, netting a second Nobel Prize in 1911, this time in chemistry. Her notoriety enabled Skłodowska to get government funding for the creation of the Radium Institute (now the Institut Curie) dedicated to research in physics and chemistry, which produced four subsequent Nobel Prize winners – the most notable being Skłodowska’s own daughter Irene. During World War I Skłodowska developed mobile radiography units to offer x-rays in the field and even offered to donate her Nobel Prize medals to the war effort (the offer was turned down).

After years of exposure to harmful radioactive materials – the health effects were not known at the time, and Skłodowska worked without the safety measures in place today – Skłodowska succumbed to aplastic anemia (many of her papers and artefacts are too radioactive to be handled without protective gear even today) on July 4, 1934. Skłodowska was buried alongside her husband in Paris, but in 1995 the couple was moved to the famed Pantheon alongside legends like Voltaire and Victor Hugo.

Despite her long history in France Skłodowska was forever loyal to Poland, hiring Polish nannies for her daughters and making frequent trips to her homeland over the years to hike the Tatras and visit family. Poland returned that love, naming everything from a university (Maria Curie-Skłodowska University in Lublin) to a nuclear reactor after its favourite daughter.

ul. Freta 16
/warsaw/maria-sklodowska-curie-museum_21389v
Born Maria Skłodowska on November 7, 1867, this museum is dedicated to the Polish lass would go on to become a famed scientist better known to the world as …
see more
Parks

ul. Marii Skłodowskiej-Curie
/warsaw/maria-sklodowska-curie-park_103249v
Yes, the lady has her own park. And not only that, the park contains a life-sized statue of the famed scientist and an educational trail that opened in 2011 …
see more
Murals

ul. Lipowa 3
/warsaw/mural-of-maria-sklodowska-curie_103261v
If you’ve always pictured Maria Skłodowska-Curie as a bit of a scientific bad-ass then you’ll appreciate the mural of her on ul. Lipowa 3 near Warsaw …
see more
Monuments

ul. Powązkowska 14
/warsaw/sklodowska-family-tomb_103247v
Maria Skłodowska-Curie died on July 4, 1934 in a clinic in the French Alps. The cause of death: leukaemia, most likely a result of her many years of dangerous …
see more