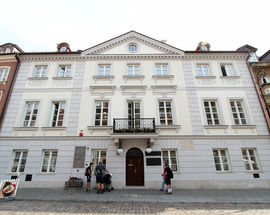 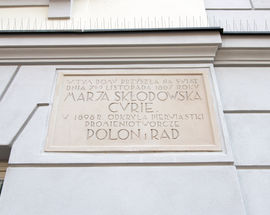 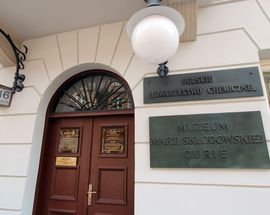 Born in Warsaw on November 7, 1867, local lass Maria Skłodowska would become better known to the world as Madame Marie Curie. Located in the  recently-renovated building she was born in, this charming museum pays homage to the life and work of the Nobel Prize-winning physicist and chemist, including displays of Curie’s personal letters that show another side to the famed scientist. Artefacts on display include many personal effects, such as black georgette coat, worn by the Nobel Prize winner during her last stay in Poland in 1932, a leather handbag, offered to her in 1921 by the Polish Women’s Alliance of America, as well as a small collection of Curie's scientific instruments. An exhibit of particular interest is an elephant, gifted by the President of the United States, Herbert Hoover, which Skłodowska-Curie received as a souvenir of her visit to the White House in 1929 - the purpose of this visit was to collect $50,000 for the purchase of a gram of radium for the emerging then the Radium Institute in Warsaw. One of the museum’s five rooms has been adapted as a recreation of Marie and Pierre Curie's Parisian laboratory, and another focusing on the Skłodowska family, to give visitor’s a glimpse into her life. The lady who gave the world so much, including the chemical element polonium (named after the country of her birth) died in Sancellemoz sanatorium in Passy, Haute-Savoie, France, on July 4, 1934, the victim of leukaemia, which she is believed to have contracted during her many years of dangerous research. Guides are on hand for tours in English (150zł) and in Polish (100zł). The museum also functions as a cultural institute, organising temporary exhibitions, lectures, meetings with authors and other events, therefore check their site calendar for the latest information.