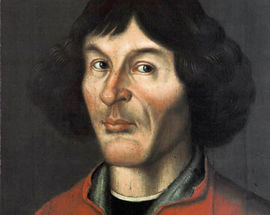 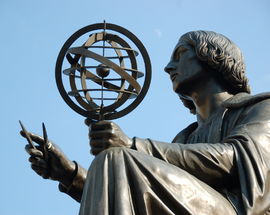 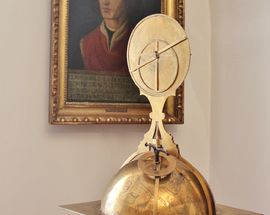 Mikolaj Kopernik was born the youngest son of a copper trader in Torun on February 19, 1473. His father died when he was just 10, and the young Mikolaj was sent by his uncle, the canon at Frombork (German Frauenberg) Cathedral Lucas Watzenrode, to the Cathedral school of Wloclawek where he received a first class humanist education. In 1488 Kopernik began his studies at Krakow University (then the capital of Poland), where he studied Latin, mathematics, astronomy, geography and philosophy, learning his astronomy from Johannes de Sacrobosco's 13th- century book, Tractatus de Sphaera.

It was at Krakow University that Mikolaj Kopernik, started using the Latin version of his name, Nicolaus Copernicus. He finished his studies in Krakow after four years without formally graduating, and, encouraged by his uncle, travelled to Bologna in 1496 to take a degree in Canon Law. Alongside his official course Copernicus also studied Greek, mathematics and astronomy, renting rooms in the house of the university’s professor of astronomy, Domenico Maria de Novara. Assisting him with his observations, on March 9, 1497, Nicolaus Copernicus witnessed the Moon eclipse the star Aldebaran. After an obligatory year in Rome in 1500 Copernicus travelled to Frombork and was officially installed as canon of the Ermland Chapter on July 27, 1501.

However, Copernicus was soon back in Italy, this time choosing to study law and medicine in
Padua. Copernicus really had another motive for returning to Italy though, that being to continue his studies of astronomy.

Again back in Frombork, in 1509 Copernicus began publishing serious works, the first being Latin translations of the work of an obscure Greek poet, Theophylactus Simocattes. In 1512 Copernicus' uncle died. Returning to his duties as canon, Copernicus dedicated more and more of his time to the study of astronomy. It's believed that he lived in one of the towers in the Frombork Cathedral complex and built an observatory there.

In 1514 Copernicus published a hand-written book, The Little Commentary, setting out his theories of a universe with a sun at its centre, and it's generally believed that he started writing the book that made him so infamous, De Revolutionibus Orbium Coelestium, in the same year. His fame as an astronomer had by now reached the highest circles, and in 1514 (the same year he published what was essentially a heretical work) Copernicus was approached by the Pope for his advice on improving the calendar, which was known to be out of phase with the Moon.

Copernicus’ defining work De Revolutionibus Orbium Coelestium was eventually published in Nuremburg at the very end of his life in March 1543, almost 30 years after he started writing it, Copernicus outliving the publication by just two months.

Although many before him had hinted at the unthinkable, that the Earth wasn't the centre of the Universe as the Church believed, it was Nicolaus Copernicus who first stated it so publicly. Astronomers who propagated his ideas were burnt at the stake and the Catholic church placed De Revolutionibus on its list of banned books (as late as 1835) but there was no turning back progress. The modern cosmological view - that our galaxy is one of billions in a vast universe - is this man's legacy.
Museums

ul. Wybrzeże Kościuszkowskie 20
EDITOR'S PICK
/warsaw/copernicus-science-centre_72408v
A rare example of European Union funding being used in a genuinely visionary way, the CSC is many things, including the very best science centre in Europe, one …
see more
Editor's pick
Indoor Attractions

ul. Krakowskie Przedmieście
featured
/warsaw/nicolaus-copernicus-monument_18455v
The founder of modern astronomy. A sheltered academic, he made his observations a century before the invention of the telescope and without help or guidance. …
see more
Featured