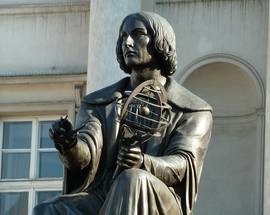 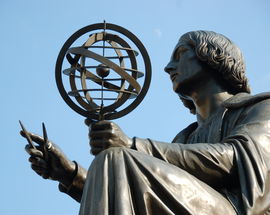 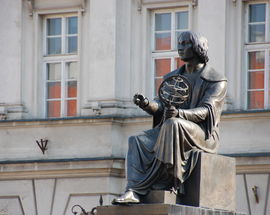 The founder of modern astronomy. A sheltered academic, Copernicus made his observations a century before the invention of the telescope and without help or guidance. His book De Revolutionibus (1543) posited that the earth rotated on its axis once a day, travelled around the sun once a year, and that man's place in the cosmos was peripheral. This may seem obvious today, but it was an utterly radical idea at the time.

Although astronomers who propagated his ideas were burned at the stake and the Catholic church placed De Revolutionibus on its list of banned books (as late as 1835), there was no turning back progress. The modern cosmological view - that our galaxy is one of billions in a vast universe - is this man's legacy.

The statue itself was unveiled in 1830 and has seen its fair share of adventure. During WWII the Nazis placed a bronze plaque insinuating that the great man was in fact - gasp! - a German. In 1942, a boy scout called Alek Dawidowski ducked the guards and removed the plaque. Boiling with fury, the Nazis removed the statue, hid it in Silesia and dynamited a few other surrounding monuments for good measure. The statue was recovered in the years following the war, while Dawidowski has entered Polish folklore as a result of his bravery.