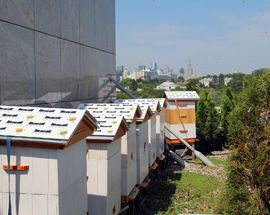 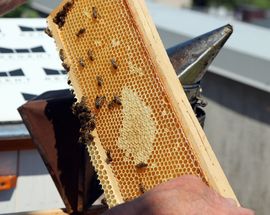 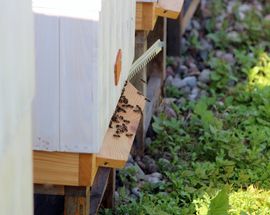 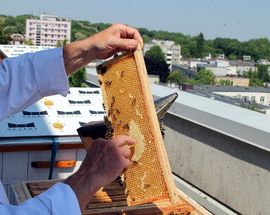 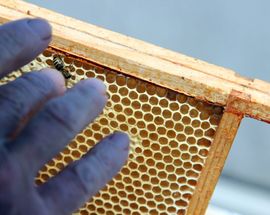 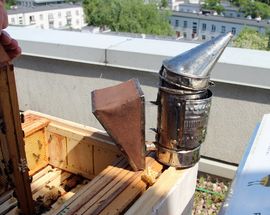 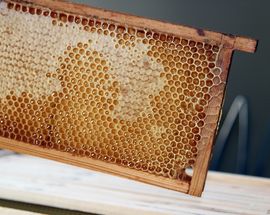 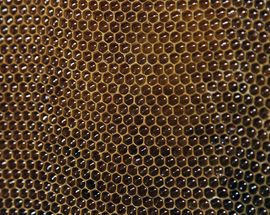 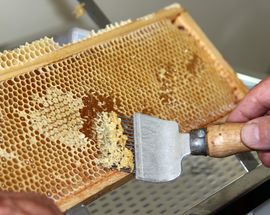 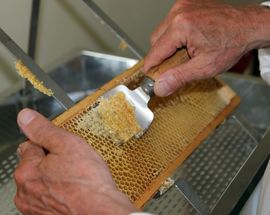 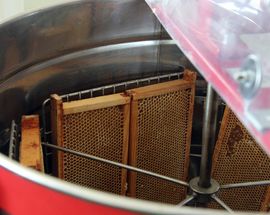 Urban Beekeeping, the continually growing trend of tending to beehives within a city environment, is likewise gaining ground (and rooftops) in Warsaw, but why are so many interested in taking up this labour intensive pastime?

It's not all about a modern-trend (well, mostly), but in Poland, there's a long history of beekeeping in the country. The new guys are joining the club as the origins of beekeeping span centuries (nay, a thousand years!). Honey was always an important part of the Polish economy in centuries gone by, all for the simple reason that sugar imports on an industrial scale are a relatively recent phenomenon, so up until then, the main source of some sweetness came from bees! Before the modern apiaries were used, it was common to see tree beekeepers (formerly known as a Bartnik) scaling great heights to tend to hives (hundreds at at time). Back then, the profits to be gained from selling honey and beeswax were roughly 30 times more than chopping down and selling trees and the role of a beekeeper was well respected too! The wax was most often used for making candles, but also in early cosmetics and even bow making. As for the sweeter side of things, if you've ever had a taste of 'Miód Pitny', or 'mead' in English (the direction translation of the Polish name is 'drinking honey'), then you'll have enjoyed a drink which has been common in Poland and Lithuania since the middle-ages, and still very popular today.

Now, fast-forward a few centuries. Beekeeping laws were relaxed in Poland in 2014, leading to ever increasing no.s of urban hives appearing across Warsaw, but why were so many interested in taking up this very labour intensive pastime? For the good of the world is the short answer. The huge interest and increase in urban beekeeping has its roots a decade ago in fears that the global population of bees was under threat. Eco-warriors found a small way they could help boost the bee population, but in so doing, these city-dwelling individuals could also reconnect with nature. Oh, and the benefit of having your own honey is always a plus!

There are some pretty well known locations around Warsaw to have their own apiaries, from the top of the Palace of Culture and Science, to the Polish parliament (Sejm), however, one of the first places to start the Warsaw urban beekeeping trend was the Regent Warsaw Hotel, which we visited to learn more about this fascinating topic.

Thanks to on-site 'Bee Master' (which in itself is a pretty bad-ass job title), Marek Barzyk, we were shown the rooftop hives, full of thousands of honey bees, a tamer variety specifically used in urban settings. We learned about the basics, the most important being "don't panic, and don't wave your arms around when near the hives – don't act like a windmill!" Yes, sir!

The statistics Mr Barzyk told us had us impressed: the average hive in Regent produces around 50kg of honey per year, and on the roof, they have 7 containing around 500,000 bees, which can produce collectively anything between 350-400kg per year. The interesting thing about the hotel's location is that it's right next to Łazienki Park (perfect for bees, and also the namesake for the hotel's own honey 'Łazienki Gold', which is available to hotel guests at breakfast!). But the proximity of the park doesn't limit these hard workers for they often go as far as 2-5km to collect nectar, and can easily make their way back to the hive due to superior navigation skills. And here we are, technologically advanced humans thumbling around cities using GPS devices...

Now for the honey itself – the quality is quite fantastic and can match or even outperform rural variations, all for the simple reason that pesticides are not used on plants in the urban environment compared to the large-scale use on crops in rural settings. Also, the variety of plants available to urban bees is, surprisingly, much wider - there may be more plants in the countryside, but fewer species compared to the urban landscape.

The world of urban beekeeping is fascinating, allowing you to gain a new insight into environmental issues, and how important bees really are in the grand scheme of things. If you wish to learn more about urban beekeeping in Warsaw, a visit to Mokotów's Królikarnia could be in order, as the organisation 'Miejske Pszczoły' (City Bees) setup some apiaries in the grounds of this museum.

Cream of the Crop

ul. Belwederska 23
/warsaw/regent-warsaw-hotel_17702v
Situated right on the doorstep of Łazienki Park, the Regent not only has all the five star trimmings, but the biggest hotel swimming pool in Warsaw. By hotel …
see more

Wojtek, the Soldier Bear feature
Zalipie: The Most Photogenic Village in Poland Kraków Day-trips
Righteous Among the Nations: 4 Polish Heroes You Should Know feature
see more