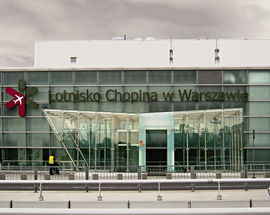 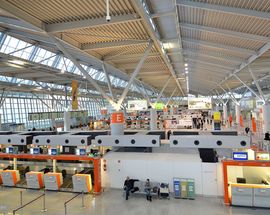 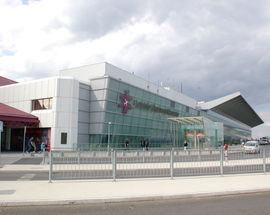 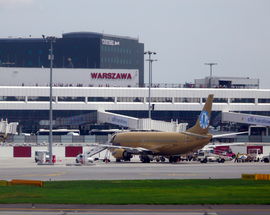 Warsaw Chopin Airport has recently seen the opening of Zone CDE, a glass and steel giant that sits rather awkwardly next to the newly renovated Zone AB. Both Zones AB and CDE have a wealth of shops, restaurants, tourist and public transport (ZTM) info, ATM machines, fast food (McDonald's!), car rental offices, exchange offices etc. and they are collectively called Terminal A. The viewing platform is free from 06:00 - 22:00 and located near the entrance to the train platform. There is also a Kiss and Fly parking zone where you can drop passengers off for free (the first 5 times) up to 7 minutes (careful because for 15 mins it's 30zł). Subsequent stops cost 1zł p/min!

The taxi rank outside exits 1 and 2 offers three certified companies: iTaxi, MPT and Ele Taxi. The 15-30 minute ride to the centre costs around 35-50zł, though be on guard for unlicensed sharks who will try to charge three or four times that. After hearing several complaints, we suggest agreeing on the price with your driver before setting off. Cheapskates can catch the train into the city or take public transport (ZTM) bus no. 175.

The train station can be found underground by turning right outside of whichever arrivals area you leave from and going all the way to the end of the covered section where you will find escalators taking you down to ticket booths. The SKM trains run several times an hour and are red and white in colour. Line S2 takes you to Warszawa Śródmieście station in the city centre and runs twice an hour, while line S3 takes you to Warszawa Gdańska (also the location of M1 metro station Dworzec Gdański) and the Koleje Mazowieckie (RL) train takes you to Warsaw Centrail station and Modlin Train Station (if you're going to Warsaw Modlin Airport) and runs once an hour. To take one of these trains you need a normal public transport ticket (exactly the same as what you’d use for the bus) that are available from the ticket booths and cost 4.40zł. They also have their own ticket office at the station with a fixed price of 7.50zł, but you can use an SKM ticket here as long as you have the train driver validate it. They also have a new ticket available which covers your transfer from Chopin to Modlin Airport and also gives you 75 minutes travel in the first zone of ZTM (19zł). The train ride to the centre should take around 20 minutes. Bus stops can be found in front of arrivals at Zone AB and Zone CDE. Buses run frequently between 04:58 and 22:58 with journey time taking approximately 25 minutes. At night when the 175 stops running travellers can take the N32 night bus, which runs every 30 minutes.

Car parking at Warsaw Chopin Airport, including long term parking, are covered in the table below:

08.11.2017
Den
Hampshire
Just used the S3 from the airport to Warsaw Central. PLN4.40 for up to 75 mins. 20 minutes to the centre. Helpful staff at the ticket machine. Don''t forget to validate your ticket once on board. I remembered just after the train started. 10 minutes later ticket inspector appears! Have taken taxis previously. No more as the train is so much more comfortable and amazing value at around GBP 1.50.
10.02.2016
LADESIDE
GLASGOW
Having used the train a couple of times previously, I can confirm that the infrastructure is excellent with brand new trains on leaving from the station on site and taking you directly to the centre of Warsaw. We also found the city itself extremely safe and the locals all very decent and friendly. If travelling at the weekend it's best to purchase the weekend special ticket from the kiosk in arrivals for the bargain price of 24 zloty as this allows you unlimited travel all weekend on all modes of transport in and around the city and also includes the Airport connections. If only our public transport in the UK was half as good and half as reasonable as Polands..........
30.12.2013
Krzysztof
Liverpool, UK
If you&#39;re one of Britain&#39;s much&#045;maligned, over&#045;taxed smokers, you&#39;ll be pleased to know that Warsaw Chopin is one of the few airports in Poland that sells Lambert &amp; Butler cigarettes in its airside shops. Travelling within the EU you must pay the &#39;tax&#045;paid&#39; price rather than the &#39;tax&#045;free&#39; price [available to those travelling outside of the EU]. However, with a &#39;tax&#045;paid&#39; price of only 130 Zlt for a carton of 200, purchase 800 and you could, potentially, still save enough money on your fags to pay for your weekend trip.
16.07.2013
Lance Grundy

Tickets for the 175 city bus are available from the Relay newspaper kiosk on the right as you come into the arrivals hall.
09.07.2013
Marcin Mielczarek
Warsaw
The journey with www.ModlinTransport was indeed safe and comfortable. The driver waited at the airport exit to meet us, had a placard ready with our names, and was friendly and helpful. It was especially useful to be able to talk to him.
Take your guide with you Download a pdf