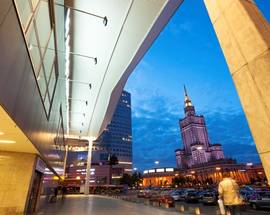 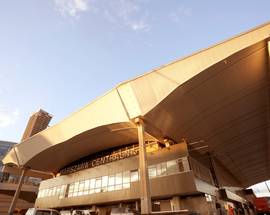 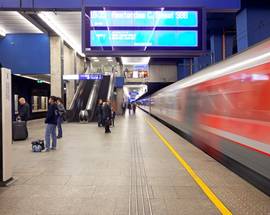 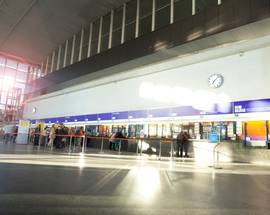 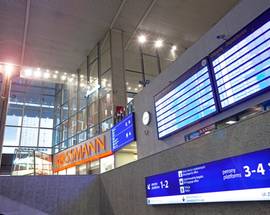 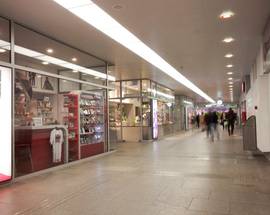 Warsaw Central Station (Warszawa Centralna) is exactly what it says on the tin: central. And thanks to a fantastic renovation, we're happy to say it's now easier to navigate as well. Once you alight from your train, take one of the two facing escalators in the centre of the platform, which will lead you up into one of the underground passages that flank the main hall. Whichever side you come up on you will be one level below ground level and the ticket hall. Kantors can be found in the underground passageway between Centralna and the Marriott. Signs for ATMs (bankomats) are everywhere, and though once sparse the machines can be spotted at almost every turn.

Tourist info can be found across the street at the Palace of Culture - just look for the 'i' sign (open daily 09:00-19:00). They can provide you with maps, etc. Tickets for the public transport system can be bought from most of the newspaper kiosks. Left luggage is located in the underground corridor that runs below the main hall. Look for Przechowalnia Bagażu, where stewards will look after your bag, or opt for one of the plentiful lockers. Connect to a Polish network via mobile by getting SIM and pre-paid cards from the same newsagents (you now need to register any new SIM card so expect a bit of a wait).

Both entrances of the main hall are covered by taxi ranks, and by passing via tunnels under the main road you’ll find bus and tram stops though once you enter, the signs are more of a hindrance than a help and you may never be seen or heard of again. Officially sanctioned SAWA taxis and ELE taxis can be called to pick you up.

On the ground level there is a travel office run by Polish rail. Find it on the Złote Tarasy side of the building to the right of the stairs heading down to the platforms under the Centrum Obsługi Klienta sign (info line 197 57, intercity.pl). Open from 09:10 - 20:30, the multi-lingual staff (they can even assist the deaf) can search for the cheapest/easiest connection, sell you international and domestic tickets, and can help plan your trip for you. There is a new info point called InfoDworzec open 07:00-21:00 which offers more general tourist info.

The selection of outlets selling food and drink at Centralna has improved dramatically with the renovations. There are all kinds of local and international coffee joints, fast food chains and kebab shops to grab a quick bite or pass some time. If you have a lot of time to kill, Champions in the Marriott can be reached via the underground passageway and offers a far better place to sit and wait than the station itself, as does the nearby Złote Tarasy shopping centre. Don't be alarmed to find Warszawa Centralna used as a drop-in centre by Warsaw's homeless population - while most are harmless some like to pass their time being drunk and abusive. Bizarrely, while the Polish rail staff manning the ticket booths are mono-lingual, the tramps in Centralna seem adept at begging in a multitude of tongues.

Open 24hrs. Note that due to system maintenance seat reservations cannot be made between 24:00-01:00.

Al. Jerozolimskie 54 (Warszawa Centralna Train Station)
/warsaw/2theloo_81007v
Plenty of upgrades and new additions have come to Warsaw courtesy of the Euro 2012 tournament – check out that shiny new stadium across the river – but one of the most interesting improvements can be found at Warsaw Central Station. The stat
see more

Palace of Culture, Pl. Defilad 1 (entrance from ul. Emilii Plater)
/warsaw/tourist-information_19590v
This central tourist information office is inside the Palace of Culture (if you exit Central Station on the Złote Tarasy shopping complex side and cross over the road you'll see it). Inside you can choose from a series of guides.
see more

Need cheap TAXI in Warsaw? Check www.Warsaw-airport-transfers.pl.The most comfortable and convenient way to travel from and to Warsaw and considerably cheaper than the Warsaw Taxi service using taximeter.
08.03.2013
Richard Cywinski

Concise and informative. I plan to visit Warsaw soon, and the information in this website has eliminated a number of apprehensions.
Take your guide with you Download a pdf