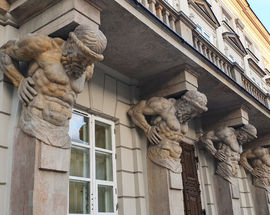 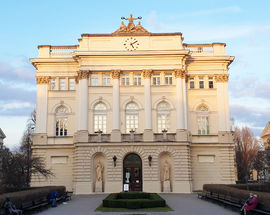 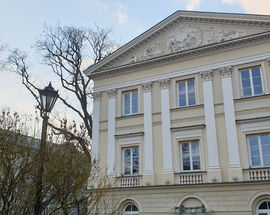 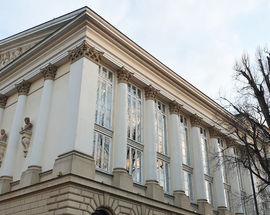 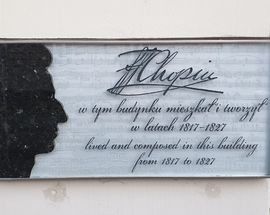 The University of Warsaw – which vies with the Jagellonian University of Kraków for the title of Poland’s most respected seat of learning – occupies a suitably grand location on Krakowskie Przedmieście, Warsaw’s own version of the Champs Elysee. Established in 1816 after the partition of Poland, the university employs more than 5,500 people, who look after around 55,000 students.
A walk around the university’s main campus is one of the most enjoyable diversions a visitor to Warsaw can take. A genuine campus-like atmosphere greets you as you wander through the grand main gates, where inside a number of fantastic period buildings and palaces, set amongst leafy courtyards, exude erudition and learning from every brick. Students sit on benches reading books and smoking cigarettes, a few hurry between buildings scurrying from lecture to lecture. It all adds to the buzz.
The most impressive building in the complex is the magnificent Kazimierzowski Palace, originally built in 1637 as the main residence of King Jan II Kazimierz, from where it takes its name. Destroyed and rebuilt at least four times since then, it has served as the rectorate of the university since 1960. The latest renovation of the palace was completed only in 2006, and has left it looking better than ever: a treasure of Neo-Classical architecture and one of Warsaw’s finest buildings. Other buildings worthy of note on campus are the Neo-Classical Tyskiewicz Palace and the Baroque Uruski Palace, both of which were likewise built in the 17th century as the residence of aristocratic families.
The universities students have long been at the vanguard of Poland’s struggle against invaders and occupiers, The university was even closed for in 1830 after its students took part in the Cadet Rebellion against the Russian Empire, and reopened only in 1863. Similarly, many students – who were studying in secret, the Nazi’s having closed the university in 1939 – joined the Warsaw Uprising of 1944, determined to recapture the campus from the Wehrmacht, who had taken it over for use as administrative offices and an officer training school. Alas, the campus gates, so impressive today, proved impenetrable, and hundreds of students were killed before the game was given up. By the time of the Nazi withdrawal later in the year more than two thirds of the university had been destroyed – some of it deliberately by the vengeful Nazis – and more than 80 per cent of the university’s library and art collection had been looted.
Show on map