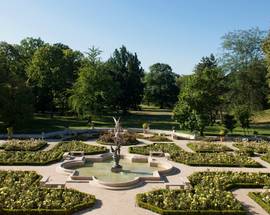 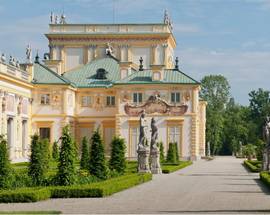 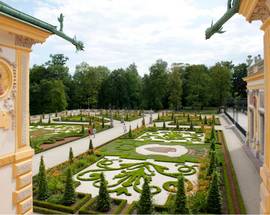 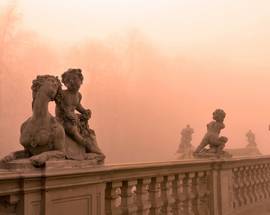 The 45 hectares that make up Wilanów Park grew over the centuries according to the particular fancies of its owners. The park’s present form dates from the extensive and mostly faithful renovations made during the 1950s, overseen by the architect and historian Professor Gerard Ciołek (1909-1966). Made up of a series of individual gardens, the park includes a two-level Baroque garden, a Neo-Renaissance rose garden, a classical English landscape park and the so-called English-Chinese landscape park. The park near the Orangery, East, North and Rose gardens and their associated architecture were recently the subject of a major revitalisation program and during work on the Baroque garden a series of archaeological digs discovered several artefacts, including ceramics dating from the 12th century. Now the gardens have been restored to their appearance during the time of King Jan III Sobieski.

Each year, from early October until the end of February, the gardens around Wilanów Palace become a colourful and festive wonderland of lights, as literally thousands of tiny LED lights trace the baroque contours of the sculptures, gardens and plants. Known as the 'Royal Garden of Lights,' it is one of Warsaw's most beloved holiday traditions, as almost every local family turns out at some point to see the impressive illuminations; you should too.

ul. St. Kostki Potockiego 18
/warsaw/st-annes-church_74464v
Located at Wilanów, a church has stood on this exact site since the 14th century, when the wooden church of St. Leonard was built here. This was replaced by a Gothic wooden constr
see more

ul. St. Kostki Potockiego 10/16
/warsaw/wilanow-palace-museum_52583v
The first museum at Wilanów was opened in 1805 by the palace’s owner at the time, Stanisław Kostka Potocki. The current museum, which takes up a su
see more