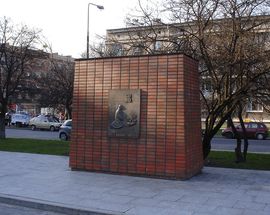 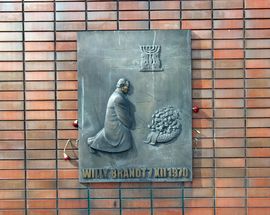 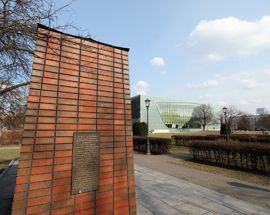 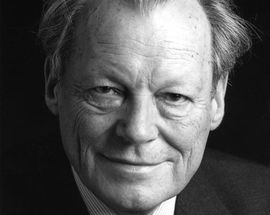 On December 7, 1970 images were flashed across the world of German Chancellor Willy Brandt knelt in pensive apology in front of Warsaw’s Monument to the Ghetto Heroes. Popularly known as the ‘kniefall’ the spontaneous gesture was to become a symbol of reconciliation between east and west, with Brandt later confessing, “Under the weight of German history, and carrying the burden of the millions who were murdered, I did what people do when words fail them.” A monument commemorating his landmark act was unveiled 30 years later in the northeast corner of the park that houses the Ghetto Heroes Monument and the POLIN Museum of the History of Polish Jews. Made of brick, and featuring a brass relief designed by Wiktoria Czechowska Antoniewska, the monument was unveiled by a delegation that included Brandt’s widow, Danzig-born author Gunter Grass, Chancellor Gerhard Schroeder and Polish Prime Minister Jerzy Buzek. The square in which it is located has also since been named in honour of Brandt.
Show on map

ul. Zamenhofa
/warsaw/ghetto-heroes-monument_19581v
In the middle of a large, attractive square beside the POLIN Museum, you'll find the Monument to the Ghetto Heroes, which commemorates the first Warsaw
see more