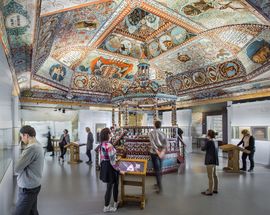 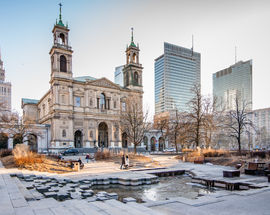 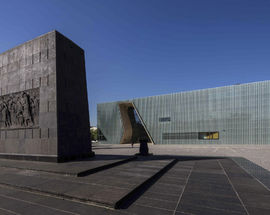 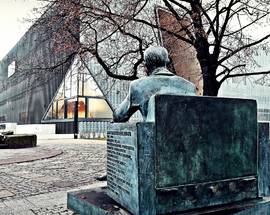 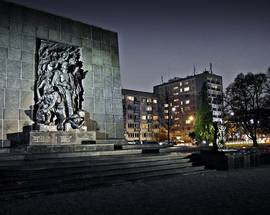 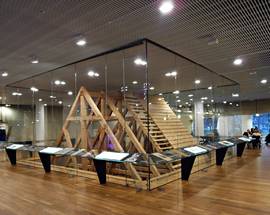 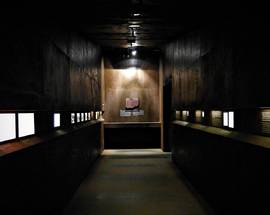 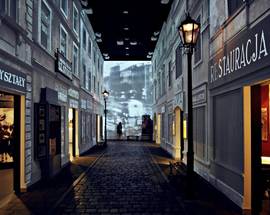 At the time Hitler chose to expand Germany’s territories under the odious excuse of providing ‘living space’ for the German people, Warsaw’s Jewish population numbered 350,000 and growing. Neither pogroms nor the occasional boycott of Jewish businesses deterred Jews from settling in the Polish capital and only New York could boast a larger Jewish community. Yet within six years Warsaw’s thriving Jewish scene was all but wiped from the map, with over 90 percent perishing either in the Warsaw Ghetto or the gas chambers of Treblinka.


Although anti-Semitism was by no means rare, Poland was seen as a relative safe haven, and it drew settlers forced into flight by more discriminatory regimes elsewhere. By the inter-war years the Jewish population had made significant contributions to the social, political and cultural fabric of Poland, a contribution that would eventually be extinguished by the monstrous racial policies of the Nazis. When Warsaw fell following a brief yet brutal siege the city’s ancient Jewish population was damned to destruction. By 1940 Jews were forcibly penned into an area that already housed most of the Jewish population. On March 27, 1940, the Judenrat - a Jewish council answerable to the Nazi’s whims, was ordered to build a wall around the ghetto and a resettlement deadline of October 15 was handed to the city’s Jews. Failure to move into the assigned area was punishable by death. Spanning 18 kilometres and enclosing 73 of Warsaw’s 1,800 streets, the area was carved into a ‘small’ and ‘large’ ghetto, the two linked by a wooden bridge standing over ul. Chłodna. Today an installation titled ‘Footbridge of Memory’ stands at this spot, with optical fibres illuminating the former handrails over the street at night.

From the beginning, conditions in the Warsaw Ghetto were harsh; recovered Nazi files show that while ethnic Germans in Warsaw were granted a food allowance totalling 2,613 calories per day, Jews and other groups deemed ‘sub-human’ were expected to survive on 184 calories. Unsurprisingly a black market supported by a smuggling network ran rife, with some 80% of the food in the ghetto supplied through illegal means. Still it was not enough and as the noose tightened, starvation became the principal enemy. In 1941 over 100,000 died in this way, their bodies often left to rot in the streets. Of the 800 ghettos scattered around the Third Reich, Warsaw was the largest and also the deadliest. At its zenith approximately 380,000 residents found themselves squashed into the ghetto, with an average of eight people to a room. Yet amid this sea of suffering a remarkable social scene flourished, as proved by the meticulous ghetto diaries kept by Emanuel Ringelblum. Although murdered by the Nazis in 1944, Ringelblum, an intellectual and social activist, kept volumes of notes documenting the day-to-day life of ghetto inhabitants. It is from his painstaking notes we learn of the soup kitchens and charities that existed, of the musical concerts and cabarets and the fifty or so underground newspapers that circulated amongst the masses.

The illusion of a self-contained, cruel, but surviving parallel world was shattered in 1942 when the Wansee Conference rubber-stamped plans for the ‘final solution to the Jewish question’ and the first deportations to death camps began in July. Over the next few weeks around 265,000 Jews were harried to a waiting area known as Umschlagplatz, from which they were loaded into cattle wagons destined for the Treblinka gas chambers. A year later a new action to thin the ghetto was launched, and by April 1943 a final push to completely liquidate the biggest ghetto began.

For too long the Jews had been limited to passive resistance, but now, with rumours circulating about death camps, a band of ill-equipped insurgents faced up to the full weight of the Nazi military machine. Led by Mordechaj Anielewicz, the Jewish Fighting Organisation (ŻOB) launched the Ghetto Uprising on April 19, 1943. Numbering a few hundred the Jewish fighters continued their dogged resistance, but faced with heavy artillery and even Stuka Dive Bombers it was a doomed struggle. Vicious street-to-street, house-to-house battles ensued, with insurgents often burnt out of their boltholes by flamethrowers and gas. On May 8 German forces surrounded the principal command post of the rebels on ul. Miła 18 and rather than face capture Anielewicz and his cabal opted for mass suicide. By May 16 the Uprising was over, with German commander Jurgen Stroop announcing, “The former Jewish quarter of Warsaw is no longer in existence.” With the fighting over the rest of the ghetto was levelled, and its inmates either sent to Treblinka or assigned to Gęsiówka (ul. Gęsia), a small concentration camp. It is estimated that some 15,000 Jews survived the war hiding out on the Aryan side.

Today, Warsaw’s Jewish population is estimated to stand only at around 2,000, however, large efforts have been put into honouring the city's Jewish heritage and reintroducing Jewish culture - most notably the opening of the POLIN Museum of the History of Polish Jews in 2014. Without a doubt, one of the highlights in the Warsaw events calendar is the yearly Singer’s Warsaw Festival. It takes place towards the end of August and the whole area around Plac Grzybowski turns into eight days of festivities, performances, concerts, exhibitions, markets with spontaneous events and good natured camaraderie in the locales around the square. Since its inception in 2004 the festival gets bigger and more popular by the year, attracting visitors and performers from around the globe.

Sites related to Jewish history, heritage and community in Warsaw:

EDITOR'S PICK
/warsaw/plac-grzybowski_127870v
This delightful square connects the city’s past to its present and unites the worlds of commerce, religion, entertainment and art. The main attraction of the …
see more
Editor's pick
Museums

ul. Św. Wincentego 15 (Bródno)
/warsaw/brodno-jewish-cemetery_19575v
Traditionally the burial ground of Warsaw’s poorer Jews, this is the oldest Jewish cemetery in Warsaw. Founded in 1780, much of it was wrecked during the Nazi …
see more
Monuments

Skwer Willy'ego Brandta
/warsaw/willy-brandt-kniefall-monument_47834v
On December 7, 1970 images were flashed across the world of German Chancellor Willy Brandt knelt in pensive apology in front of Warsaw’s Monument to the Ghetto …
see more
Monuments

ul. Zamenhofa
/warsaw/ghetto-heroes-monument_19581v
In the middle of a large, attractive square beside the POLIN Museum, you'll find the Monument to the Ghetto Heroes, which commemorates
see more
Monuments

ul. Prosta 51
/warsaw/memorial-to-the-evacuation-of-warsaw-ghetto_154003v
Unveiled in 2010, this monument is located on ul. Prosta 51, right next to the sewer entrance where a group of around 50 fighters from the Warsaw Ghe
see more
Theatre Stages

ul. Senatorska 35
/warsaw/jewish-theatre-yiddish-cultural-centre_126481v
Named after the famous Polish Jewish actresses, Ester Rachel Kaminska (the Mother of Yiddish Theatre) and her daughter Ida, the group formed in 1950 and has …
see more
Monuments

ul. Sienna 55
/warsaw/jewish-ghetto-wall-fragment_19583v
Following the 1943 Ghetto Uprising the whole area was levelled so few traces remain. If you duck into the courtyard at ul. Sienna 55
see more
Murals

ul. Lubelska 30/32
/warsaw/jan-karski-mural_152856v
A mural dedicated to Jan Karski, created in 2014, to mark the 100th anniversary of his birthday. The work was created by young people form Poland, Germany and …
see more
Cemeteries

ul. Okopowa 49/51
/warsaw/okopowa-street-jewish-cemetery_19567v
A beautiful and poignant place to visit, this is Warsaw's only active Jewish cemetery. Established in 1806 beyond the city trenches ('okopy,' where today's …
see more
Murals

Ul. Karmelicka 26
/warsaw/marek-edelman-mural_152827v
Created by Dariusz Paczkowski in 2016 to commemorate one of the commanders of the Warsaw Ghetto Uprising of 1943. The text says: "Hating is easy. Loving take
see more
Monuments

ul. Miła 2
/warsaw/anielewicz-bunker_68378v
A small mound and memorial (only 350m from POLIN), marks the site of the large bunker from which the
see more
Monuments

ul. Świętokrzyska
/warsaw/janusz-korczak-monument_34307v
A monument to Janusz Korczak and the children from his orphanage, who were sent to Treb
see more
Places of Interest

ul. Twarda 6
/warsaw/nozyk-synagogue_19582v
Built between 1898 and 1902 in a neo-Romanesque style, this was the only Warsaw synagogue to survive the ravages of war; in fact, if we include prayer houses …
see more
Monuments

ul. Stawki
/warsaw/umschlagplatz_19584v
Found on ul. Stawki, close to the intersection with ul. Dzika, Umschlagplatz is a bleak, slightly disappointing monument marking the spot where around 300,000 …
see more
Monuments

Intersection of ul. Chłodna and ul. Żelazna
/warsaw/a-footbridge-of-memory_97606v
One of the most enduring images of the Warsaw Ghetto is that of the footbridge constructed over ul. Chłodna to connect
see more
Museums