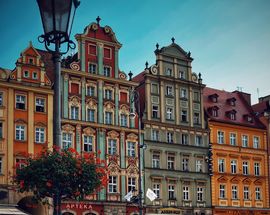 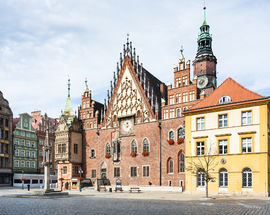 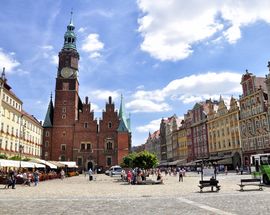 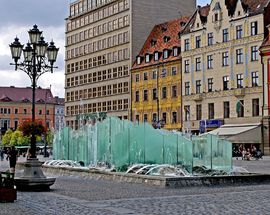 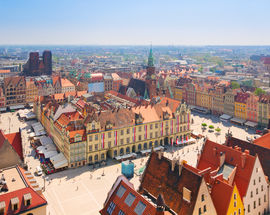 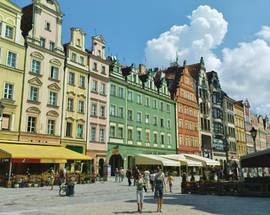 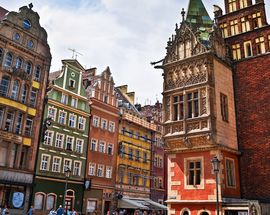 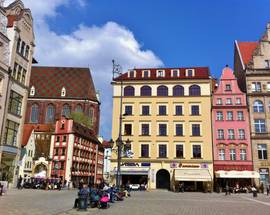 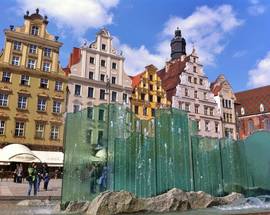 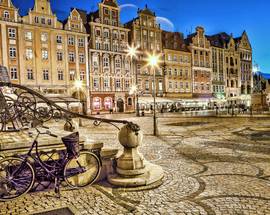 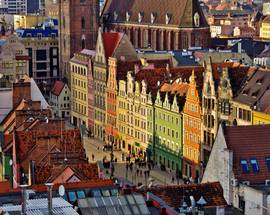 While you're gawping at the medieval majesty of the Wrocław's market square (Rynek), bear in mind that it was almost totally rebuilt from a pile of ruins after the Siege of 1945. Such was the remarkable dedication to detail of Wrocław's 'pioneers' – those who resettled here from the east after WWII - that today tourists can even admire a replica of the stone pillory (south east of the Town Hall) used to flog people from 1492 to well into the 18th century, as well as a bizarre looking bronze bear standing on a tree stump on the Town Hall's southern side. The statue of famous writer Aleksander Fredro (seated southwest of the Town Hall) was also brought from Lviv in 1956 to replace the statue that had previously occupied the space up till the end of the war - that of Kaiser Wilhelm.

Wrocław’s market square and much of the urban grid around it was laid out by city planners in 1241. It was then and remains even now one of the largest squares of its kind in Europe, and the magnificent Town Hall (Ratusz) at its centre is a masterpiece of medieval architecture. Work began on the city's administrative seat in the late 13th century and continued for 250 years, resulting in the eclectic edifice covered in decorative embellishments that we see today. Today the beautiful ensemble contains the Museum of Burgher Art - offering tourists a way to explore the interiors, as well as numerous restaurants, cafes and bars.

Ranging from Gothic to Art Nouveau, the impressive facades of the townhouses lining the market square also deserve closer inspection, one notable exception being the drab ten-storey office building at Rynek 11. Completed in 1931 the structure was designed by Heinrich Rump and offers a glimpse of how the market square may have looked had a ludicrous project to modernise the historic centre come to fruition. It was the idea of Max Berg - creator of the concrete bliss called Centennial Hall - to demolish the buildings surrounding the Rynek, replacing them with 20 storey concrete towers. After much deliberation city authorities abandoned the plan, in the process saving the Wrocław loved by all today.

Adjacent to the Market Square is Plac Solny (E-5) - almost as impressive architecturally with its elaborate reliefs and figurines bursting from the facades. Formerly home to a bazaar specialising in salt, leather and honey the smaller square is now a 24-hour flower market – good news for late-night Romeos looking to delight the local beauties they may have seduced on the dance-floors of Wrocław.
Show on map