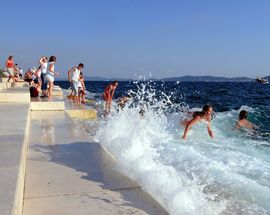 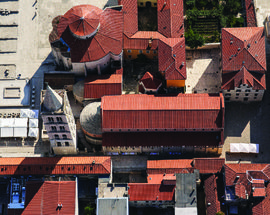 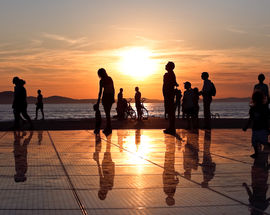 Adriatic architecture is all the rage these days, with fans of modernism yearning nostalgically for the fantastic hotels built along the Croatian coast in the 1970s and 1980s. The tourism-driven building boom of those years gave Croatia’s seaside an easily identifiable, contemporary image. Nowadays a new generation of architects are renewing the region’s reputation as a place for innovation and good design. The advertising slogan of the Croatian National Tourist Office famously used to read “Croatia: The Mediterranean as it Once Was”. Maybe “Croatia: the Mediterranean of the Future” would be a suitable replacement in the years ahead.

The question of contemporary Croatian architecture – what should it look like, and what should seaside cities do to improve public space for locals and visitors alike – is a big local issue in the historic port city of Rijeka. As a major industrial hub, Rijeka brings to the forefront all the questions about how industrial heritage should be repurposed. As a designated European Capital of Culture in 2020, Rijeka has also taken on the mantle of artistic showcase, with various projects designed to show the future direction of Adriatic art and design.

One of the central planks of Rijeka 2020 is the Sweet & Salt strand, a programme which focuses on a particular post-industrial strip of the city and looks at ways of bringing new functions to”lost” urban spaces,nurturing new ideas in urban planning at the same time. The project will continue a process that has already begun, that of transforming the area beside the river Riječina and the Molo Longo pier into a lively pedestrian strip.

Arguably the most exciting part of the project is the planned Ecumenical Pavilion, a non-denominational house of prayer and meditation designed by the legendary Zadar architect Nikola Bašić. Taking the form of a smallwhite rotunda enclosed in a spiral, the pavilion is inspired by the sweeping form of the Milky Way, and is designed to focus the mind of the visitor on the infinite. As well as being the perfect example of Bašić’s visionary style (and more on him later), it also serves as an ideal metaphor for Rijeka’s tolerant, multicultural, multi-faith and no-faith identity. Placing it in a former industrial zone beside the Riječina river lends this part of town a whole new image.

Leader of the Sweet & Salt strand Idis Turato has invited the cream of the Croatian art and design world to come up with ideas for 2020, although it is as yet unclear which of them will actually get built. Turato himself has already made a profound mark on the Adriatic architectural scene, designing (with erstwhile studio partner Saša Randić) the quite extraordinary Museum of the Apoxyomenos in Mali Lošinj. Despite being housed inside a 19th-century villa, the museum boasts an almost space-age interior, with the statue of the Apoxyomenos itself housed inside a white capsule. Randić and Turato were also responsible for the amazing Fran Krsto Frankopan elementary school on the island of Krk, together with its futuristic sports hall and accompanying public plaza. Turato’s work for private clients – the boldly cubist Villa Gumno on Krk, and the audaciously space-age Nest and Cave House in Volosko – have adorned the pages of architecture magazines around the globe.

However it is arguably Nikola Bašić who is the doyen of the new Adriatic style, having won worldwide fame for designing the Sea Organ on the seafront at Zadar. Completed in 2005, this innovative use of public space consists of organ pipes mounted inside a broad stairway that leads down to the sea. Activated by lapping waves, the pipes produce a soothing if not always musical polyphony that’s the perfect accompaniment to a spot of maritime meditation. The organ really gets into its stride when the sea is choppy. Given the famed beauty of Zadar’s sunsets, it’s a wonderful place to sit in the evening, when it attracts quite a crowd.

Three years later Bašić added Greeting to the Sun, a large disc set into the paving stones of the coastal promenade, and consisting of light-sensitive cells that absorb solar energy by day and emit a kaleidoscopic array of colourful light come night-time. Together with the Sea Organ, situated a few metres away, Greeting to the Sun has transformed this part of the Zadar seafront into a lively social forum for mingling, moving and hanging  around. Zadar, suddenly catapulted into the premier division of forward-looking resort towns, has never looked back.

Bašić has also helped to change the face of Šibenik, designing the seductively curvaceous blob that is the Hotel D-Resort, complete with its rooftop gardens. Bašić is the brains behind the (yet unrealized) plans for transforming Šibenik’s transport network, with a huge escalator linking the shoreline Dolac district with the hilltop St Michael’s Fortress, and a cable-car ascending to the fortress of Barone and St John.

Šibenik is a good example of a city that has pushed its post-industrial woes into the background thanks to sound strategic thinking: Šibenik’s Banj beach, on a stretch of coastline that was previously out of bounds due to nearby factory installations, is an exemplary piece of modern landscaping that serves as a useful model for other Adriatic destinations.

Indeed there is talk of resurfacing rivas and making-over marinas all over the Croatian coast. Plans for Baška on the island of Krk envisage a new promenade behind the beach and a floating performance stage; the island of Susak has just opened an all-new seafront walk. Betina, already transformed by the opening of the Museum of Wooden Shipbuilding, has a newly paved port area that combines boat moorings with a piazza-style public space.

Perhaps the most illustrious exponents of the new Adriatic architecture are Zagreb studio 3LHD, who redesigned maritime Croatia’s most famous public space – the Riva in Split – as well as building hotels in the Istrian resort of Rovinj, and an impressive sports hall in the Rijeka suburb of Zamet. Judging by the neat geometric terraces of 3LHD’s brand-new Hotel Park in Rovinj, Adriatic modernism has a bright future.