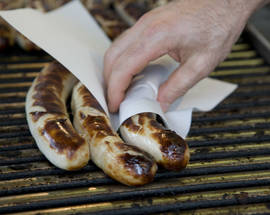 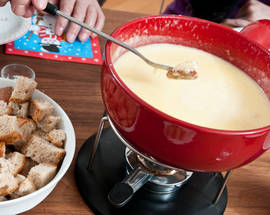 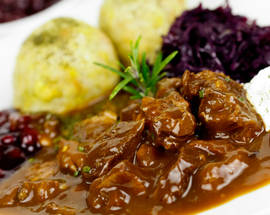 What the Swiss like to eat at home and when out is heavily influenced by their neighbours' cuisine, especially the Italians. But what is real Swiss cuisine? Most Swiss would probably say: käsefondue (cheese fondue), a hot soup of cheese and white wine eaten by dunking cubes of bread in it. Delicious, but the smell can take getting used to. Raclette is another cheese speciality, melted cheese on potatoes served with different pickles and sides. Würste or sausages are also very Swiss, the bratwurst (usually veal) and cervelat (pork) being the most common. Züri gschnätzlets is a traditional Zurich dish, thin strips of veal cooked in a cream sauce, often with mushrooms. This is often served with rösti, a cake of fried grated potatoes, a bit like Spanish tortilla but also on the list of Swiss traditionals. Switzerland also has an impressive range of breads to go with the cheeses, e.g. the rich zopf (plaited loaf) is a favourite for Sunday breakfasts. Fondue chinoise and fondue bourgignonne are not traditionally Swiss, strictly speaking, but these two meat fondues are very popular too. Both involve dipping meat into a pot, full of either hot broth (chinoise) or oil (bourgignonne) and then enjoying with a range of sauces and sides.

The best Swiss restaurants in Zurich

Tobelhofstrasse 236
/zurich/chasalp_89585v
Chäsalp is a former farm on top of Zürichberg, where fondue and raclette are now served in the ancient and recently renovated stable. This gives you a kind of …
see more
Swiss

Stauffacherstrasse 60
/zurich/volkshaus_64353v
Well placed partitionings and table lamps create an almost living-room atmosphere - even though you're sitting in a very spacious hall. The menu typed on a …
see more
Swiss

Rennweg 1
/zurich/au-gust_133285v
Black and white tiling, industrial style lamps and an open kitchen: the Au-Gust definitely looks stylish. But it's not only looks - the food is a treat too. …
see more
Swiss

Nietengasse 1
/zurich/gamper_144595v
The menu at the small and stylish Gamper usually only features a few dishes as everything here is reduced to the basics. And that's definitely a good thing. …
see more
Quick eats

Theaterstrasse 22
/zurich/sternen-grill_86638v
This is the city's most famous sausage grill joint. The bratwurst here is tasty and the mustard is a treat: made with horseradish it's extra hot and fiery. No …
see more
Swiss

Badernerstrasse 310
/zurich/huusbeiz_154666v
We had a splendid evening at Huusbeiz and the cucumber starter had us convinced from the get go. Not only did the gin and cucumber sorbet served on a cold …
see more
Swiss

Limmatstrasse 231
/zurich/markthalle_68839v
Eat a contemporary mix of Swiss and international cuisine in Zurich's only market hall, located underneath a railway overpass (part of the Im Viadukt shopping …
see more
Swiss

Bremgartnerstrasse 18
/zurich/wirtschaft-im-franz_129523v
If a long menu makes you nervous, Wirtschaft im Franz might just be the alternative you’ve been looking for as only a handful of dishes is available here for …
see more
Swiss

Niederdorfstrasse 31
/zurich/mohrenkopf_86810v
This is a pleasant place in plain style for Swiss fare, coffee and snacks or breakfast in the Niederdorf area, frequented by tourists and locals alike. The …
see more