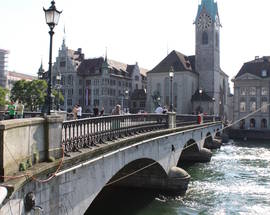 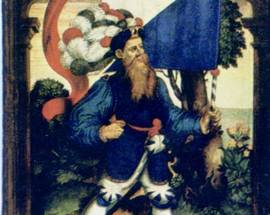 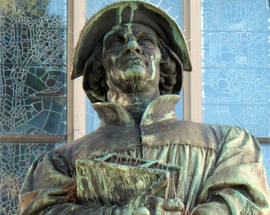 Romans and Schwyzerdüütsch (100BC - X Century)

Though human history in Zurich began before the Romans, it seems it was they who gave the city its name. Around 15 BC they established a military base at the site of today’s Lindenhof which was called Turicum, and as later inhabitants weren’t so fluent in Latin, it gradually became the slightly more callous ‘Zurich’. On Lindenhof you can find a copy of the Roman tomb stone mentioning Turicum. Roman rule ended around 400 AD and nobody really has any idea what went on in Zurich for the next few centuries. One important change that falls into this obscure period is the arrival of the Germanic tribe of the Allemanni, who brought with them the language that was to become today’s Swiss German dialect (Schwyzerdüütsch). By the 9th Century Zurich was part of the Carolingian empire and according to legend the emperor Charlemagne founded Zurich’s main cathedral, the Grossmünster. Maybe the man himself never actually turned up in Zurich, but the kings of the Franks did have a secondary residence, a pfalz, on the Lindenhof.

In the 13th Century Zurich became an imperial city, answering only to the emperor of the Holy Roman Empire which had grown out of the Carolingian Empire. Formally Zurich was now headed by a woman - the abbess of the Fraumünster abbey, who however shared power with an elected reichsvogt, the emperor’s representative. In 1336 times began to change. An uprising of Zurich’s craftsmen made the newly founded guilds the foundation of Zurich’s political structure, weakening the power of the church and the landed gentry. Even today people who matter in Zurich belong to one of the zünfte (guilds) and the Sechseläuten procession in April is their celebration (see Basics for the exact date). Many of the guild houses, still in use today, are now also restaurants like the Zunfthaus Zur Schmiden or the Zunfthaus am Neumarkt.

The guild revolution left Zurich a little isolated, which led to its alliance with the founding cantons of the Old Swiss Confederacy in 1351. So Zurich joined ‘Switzerland’, which had existed as a treaty since 1291. This however didn’t stop the city waging war against fellow cantons, such as with Schwyz which got in the way of Zurich’s plans for territorial expansion. Soon the city ruled over lands all around Lake Zurich and north all the way to the Rhine and drew its wealth from craft production, trading across the Alps and the contracting of mercenaries to foreign powers. Soldiers from the Swiss cantons armed with pike and halberd were sought-after mercenaries who fought in all major armies in Europe - occasionally even against each other. They had gained a reputation as formidable fighters, due amongst other things to the victories of the Swiss cantons over the Habsburg king’s forces trying to rein them in. Mercenary service wasn’t appreciated by all though. It was connected to corruption and moral decay and came to be criticised more and more in the early 16th Century.

Huldrych Zwingli, priest at the Grossmünster, was one of the main critics of mercenary service. But he had a lot more to say on moral matters and became the initiator of the Reformation in Zurich from 1520 on. Apart from banning mercenary service, transferring properties of monasteries and convents to the city and removing decorations from churches, the Reformation meant an end to all frivolous behaviour - drinking, prostitution and actually most fun was forbidden or strictly regulated. This had a lasting effect on Zurich. Some other Swiss cantons followed suit and became Protestant while many remained Catholic - a rift which led to many future conflicts in the Confederacy.

During the 16th and 17th Centuries Zurich’s wealth and influence increased, making it confident enough to declare itself Republic of Zurich in 1648. While political power was increasingly monopolised by a few families, new ideas and debate flourished. Among the intellectuals of the time were the educational reformer Heinrich Pestalozzi, historian Johann Jakob Bodmer who had close ties to Jean-Jacques Rousseau, or the painter Johann Heinrich Füssli, whose work you’ll find today in the Kunsthaus. From 1780 onwards they might have read the Neue Zürcher Zeitung, Zurich’s top quality newspaper which still exists today. In 1798 Zurich lost its independence as Napoleon took over, transforming the Swiss Confederacy into the Helvetic Republic, a centralised puppet state which only survived for five years. In once again independent Zurich, political refugees from other parts of Europe found asylum giving momentum to liberal ideas which led in 1831 to the transformation of Zurich to a model liberal state. This meant more democratic structures, an end to the city’s domination over the surrounding countryside and an educational reform which resulted in the school houses on Rämistrasse.

Modern-day Switzerland was founded in 1848 as a federation with much closer ties between the cantons than before. The year before, the first railway line in Switzerland was opened. Railways were also the business Alfred Escher was in, the man who for the next few decades dominated Zurich and Swiss politics like no other. Also known as the Tsar of Zurich, he founded large railway companies and was the mastermind of the construction of the Gotthard rail tunnel, finally connecting Italy with Switzerland and Germany in 1880. Escher’s statue can be found, not surprisingly, just in front of the main train station at the beginning of Bahnhofstrasse. Switzerland remained neutral during the First World War and was refuge to the likes of James Joyce and the artists who started the Dada movement here. The war did however exacerbate the poverty of the working classes and in 1918 a socialist committee with close contacts to communist Russia called a general strike. The government reacted by sending in the army which clashed with demonstrators in Zurich and brought about the end of the strike. Many of the committee’s demands were fulfilled, though not the demand for the right of women to vote, which was not introduced until 1971(!).

The Réduit and the war (XX Century)

During most of the Second World War Switzerland, formally neutral, was totally surrounded by the Axis powers, making it difficult to import food and other goods. General Guisan prepared for a military attack by posting the army at the borders and literally hollowing out the Alps, envisaging a guerrilla war from the mountains, the so-called réduit strategy. From a traditional point of view this is what saved Switzerland from becoming part of Nazi Germany, but more recently historians have suggested that other factors may have been more important, sparking off intense and emotional public debate in the 1990s. Switzerland certainly was an important financial intermediary for the Nazis, allowed freight traffic between Germany and Italy and also supplied Germany with weapons parts.

After the war Switzerland’s economy boomed and mass immigration from Southern Europe set in, while culturally and politically Switzerland remained stoutly anti-communist and very conservative. In 1968 and 1980 youth movements clashed with police, rocking Zurich and finally leading to the establishment of several autonomous youth centres. The movement brought new ideas and new cultural life to Zurich, giving it much of the drive it has today and finally shaking off the puritan restrictions Zwingli had implanted. It also spawned Zurich’s ‘needle park’, the open drug scene on Platzspitz which made Zurich notorious across Europe in the early 1990s. While the official reaction was repressive at first, Zurich shaped Swiss drug politics, introducing innovative controlled heroin programs which got addicts off the streets. Today Zurich is still a major financial centre and has lost the conservative reputation. It has become popular as a place to live for highly-skilled workers from across Europe, since Switzerland signed free-movement agreements with the European Union in 1999. This has made the lack of affordable apartments one of the major topics in Zurich today.