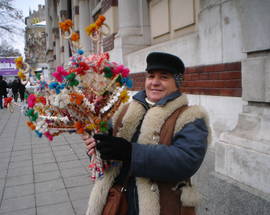 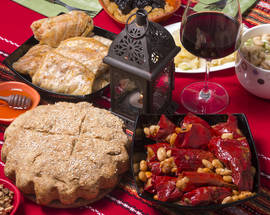 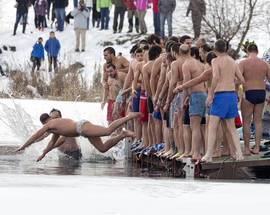 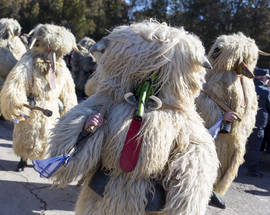 Like elsewhere in the world the main focus of the winter holidays is around Christmas and the New Year, although traditional customs vary. In addition there is a rich assortment of traditional holidays in the months of December, January and February that offer an insight to Bulgarian customs and superstitions. This is because the winter months offer a respite from the hard day-to-day work of rural life. It is a time for rest, celebrating and preparing for the fortunes of the New Year. Here we have highlighted just some of the most significant and interesting holidays.Traditional winter festivities, rooted deep in folklore are still observed in many rural areas with regional variations. Most relate to preparations and superstitions for the New Year.

6th December – ‘Nikulden’ – St. Nicholas
One of the biggest winter holidays in the build up to Christmas, not least because of the large number of people who celebrate their name day. Very much a family celebration, St. Nicholas day is the day when Bulgarians must eat fish.When preparing the fish, extra care must be taken that no scales fall on the ground, for it is believed that anyone stepping on them will fall ill and die. The fish’s head, which has the shape of a cross, is preserved as a cure against childhood illnesses.

9th December – ‘Sveta Anna’
Observed mainly in the southern and western regions of Bulgaria, this day – known as ‘Yana’s conception’ - is connected with witchcraft and magic spells. It is during the preceding night that magicians, witches and fortune-tellers can most easily make contact with the dead, the devil and demons. They appear around a fire like fruit flies. For this reasons villagers light fires with manure in front of every door, scattering ash and millet around the home and stables.Young women sow wheat in a pot and dip twigs from a cherry or apple tree in water and leave them near the fire. If by the New Year the wheat has germinated or the twigs have grown leaves, it means that the girl will get married to a good lad in the following year.In the Orthodox Church the day is dedicated to St.Anna, mother of the Virgin Mary, protector of marriage, family and motherhood, and is celebrated as the name day of ‘Anna’.

17th December – Danilovden – St.Daniels Day
According to Christian legend, Daniel, who when thrown into the lion’s pit was affectionately licked by them instead of being killed, is said to symbolize the qualities of Christ in disarming death and defying temptation.In Bulgarian folklore this day is celebrated by all pregnant women, who bake breads to give out among the neighbours as a symbol of fertility and to give them an easy birth.

20th December – ‘Ignazhden’ – St. Ignatius
This day marks the beginning of the Christmas festivities. According to legend this is the day when the Virgin Mary went into labour and devout Christians would observe a fast starting on this day till Christmas.

24th December – ‘Budni Vecher’ - Christmas Eve
Traditionally the whole family gathers on Christmas Eve. The oldest male in the household lights the fire with the Yule log, a piece of oak or pear tree. This is kept burning the whole night. The festive table is set on a layer of straw on the ground. The items put out should all be home made and there should be seven, nine or eleven vegetarian dishes. Before starting the meal, burning incense (thyme) is carried around all the rooms by the male head of the house to chase off any bad spirits. The special Christmas ceremonial bread is then broken and the first piece is placed next to an icon for the departed. The pieces are then handed out in descending order of age to the family members and some is even set aside for the animals. One lucky person will find the silver coin that has been hidden in the bread and there are other messages of good fortune baked in the bread. A spoon of wheat is thrown onto the fire for good health. No one should leave the table during the meal, all get up together. The table should not be cleared as it is believed that the dead return to feast and care for the fortune of the living. Girls can place a morsel from the first piece of bread under their pillow so that they will dream of the man they are to marry.

Christmas Day, commences at midnight with Koledouvani (Christmas Carol Singing).Koledari are the young male carol singers (bachelors or engaged men) that go from house to house in the villages, dressed in traditional festive clothes, singing special wishes for health and prosperity. In return they receive food and drink which they share at a small party afterwards.
The period from the 25th December till 6th January is known as “Mrusni Dni” (dirty days), when according to folkloric belief, monsters and other evil forces are out to play tricks on people. It is forbidden to go out at night, as this is when the evil forces are at their strongest. Gatherings and weddings do not take place during this period.

27th December – ‘Stefanovden’- St.Stefan
The last holiday of the year, the third day of Christmas is said to close the cycle. It is a day of family gatherings, eating, drinking and singing.

1st January – New Year’s Day – (also ‘Vasilovden’)
In pagan times this day was linked to the winter solstice, and marked the turning point in Mother Nature. There are several rituals related to this day, the most popular and observed is the ‘Sourvakane’. Young children prepare and decorate a branch from a cornel tree, known as a ‘sourvachka’. With this they go from home to home tapping the older generation on the back, reciting wishes for health and wealth in the coming year. They are usually rewarded with some small coins or ‘gevrek’(like bagels) and dried fruit.‘Ladouvane’ is a ritual performed by young maidens in Western and central regions of Bulgaria at this time of year. The maidens drop their rings or bracelets into a cauldron filled with fresh spring or well water, together with oats or barley. The cauldron is covered with a red or white cloth and left out overnight under a fruit tree. The next day one of the girls, dressed up as a bride takes the rings from the cauldron whilst the other girls sing fortune- telling songs. Each girl takes some of the oats from the pot and places them under her pillow. The man she dreams about will be her groom.

6th January – Jordanovden - Voditsi
The day is dedicated to the purifying power of water. Water is blessed and the congregation is sprinkled with holy water. The most dramatic event that takes place on this day all round the country is the throwing of a cross into the icy waters of a lake, river or the sea. Young men dive in and race to see who will be the first to retrieve the cross. The winner is said to be healthy and lucky throughout the following year. All those who celebrate their name day should take a ritual bath in the icy waters (followed by a good strong red wine!).

7th January – Ivanovden
This day marks the end of the Christmas holiday cycle, and in the Orthodox Church is dedicated to St. John the Baptist, who bathed Christ in the River Jordan, recognizing him as the son of God. The ritual bathing from the previous day continues and in many ways is more significant on this day. At the end of the day the ‘Horo’ is danced by all in the village.

18th January – Atanasovden
A holiday linked to New Year customs, St. Atanas, the lord of snow and ice rides into the mountains in his silk shirt on his white horse ordering the winter to leave and the summer to come. For this reason the holiday is considered mid winter’s day.A black chicken or hen is slaughtered and prepared with rice. It is shared among neighbours and friends as a protection against illness, the wings are saved as it is believed that they have healing powers.The twin brothers Anton and Atanas were ironsmiths and both the 17th and 18th January are celebrated by smiths and related professions. Many of the customs and superstitions of the days are interconnected.

21st January – Babinden
Although literally translated it implies ‘day of the grandmothers or old women’, it is in fact known as midwife day. Dedicated to the health of the child, the midwives visit the homes of recently delivered children to bathe them and anoint them with oil and honey.

31st January – Sredzimie (Midwinter)
A remnant from the oldest Indo-European New Year it is celebrated here by all the varios herdsmen (cow, sheep, pigs)

1st February – Trifon Zarezan
A day dedicated to the trimming of the vines.Early in the morning the housewife prepares a ceremonial bread, boils a chicken and prepares a flask of wine, all of which are placed in a colourful woolen bag together with a bottle of holy water from the church. Facing the rising sun, several twigs are cut from one or three roots either in the middle or in a corner of the vineyard. The vine is ‘watered’ with wine and the blessed water to protect it from hail and frost. The cut twigs are twisted into wreaths, which are worn or used to decorate wine bottles. Others are taken home and placed next to the icon.After the pruning of the vine the men settle down to a festive meal in the vineyard. In some areas a ‘wine king’ is crowned, his happiness will reflect in the harvest. The wine king is pulled on a special cart back to the village where the celebrations continue for the next two days!

3rd February – Semen Den (Seeds Day)
It is said that if a woman wants to conceive she must stand at a crossroad giving out “pinched corn bread”. Pinch means that the dough has been pinched many times to mark the pattern of a cross.

14th February – Valentine’s Day
Originally celebrated as Trifon Zarezan, post communist Bulgaria could not resist the temptation of declaring this day the day of lovers just as in the West and so Trifon was moved. Real wine lovers use it as an excuse to celebrate twice under the same pretext!

Kukeri (The Mummers Custom)
This is one of the most spectacular pagan events in the Bulgarian calendar and usually coincides with the start of the Orthodox lent although dates vary according to regions. A carnival of masked men dressed in goats or sheep skins and carrying huge bells the noise is deafening as they make their way around the village chasing off bad spirits and illnesses, making way for a rich and plentiful harvest.