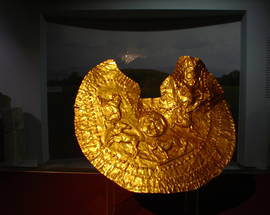 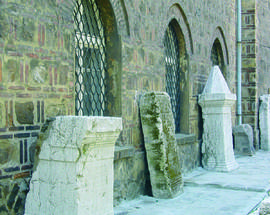 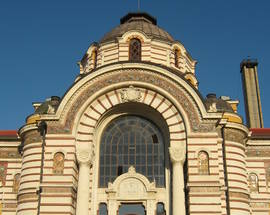 Sofia became the capital of Bulgaria in 1879 but the history of the city dates back some 7000 years making it one of the oldest cities in Europe. Situated at the foothills of Vitosha Mountain and surrounded by the low lying Lyulin and Sredna Gora Mountain ranges the 1000 square kilometer Sofia Plain has throughout history been a strategic location.

Neolithic mounds unearthed in surrounding villages and within several of the city’s residential districts bear witness to Sofia’s claim to be one of Europe’s oldest cities. The earliest finds in the city centre proper include implements and engraved ceramic vessels from the Stone and Copper ages. During the first millennium BC, the Thracian Serdi tribe – who gave the city its first name, Serdica – settled around the central hot springs. In 500 BC they were included in the kingdom of the powerful Odrysae tribe. Eventually, the internecine squabbling weakened the Thracians, enabling Philip of Macedonia to conquer Thrace and Serdica in the 4th century BC.

The Romans had their turn in the first century and the Thracian lands were divided into the regional provinces of Moesia and Thrace. As the designated centre of an administrative district, Serdica was granted municipium, or autonomous status, by Emperor Trajan (98-117), which included the right to mint its own coins and levy taxes. In his honour, the city was renamed Ulpia Serdica. Befitting its newfound importance, a number of private and public buildings were erected, including baths, villas and temples (remains of a large temple honouring Zeus have been uncovered near the intersection of Vitosha Blvd. and Tsar Simeon streets). Important municipal buildings of the time included a praetorium (headquarters of the governor), an amphitheatre-like bouleterion (municipal council) and civil basilica.

Given its strategic location astride major trade and military routes linking Asia and Europe, the city was fortified from the 2nd century, when it became the seat of the province of Inner Dacia. It reached its grandeur under Emperor Constantine the Great (306-337), who often referred to Serdica as My Rome. As a centre of early Christianity, a number of churches were built, including the extant St George Rotunda and the St Sofia Basilica. Ammianus Marcellinus wrote in the 4th century that Serdica was ‘a brilliant and noble town’ but marauding tribes of Goths and Huns were apparently unimpressed. The latter, under Attila, laid waste to much of the city in the mid-5th century, after which it was restored and the fortress wall strengthened.

The Bulgars and Byzantium

In 809 Khan Krum incorporated Serdica into the First Bulgarian Kingdom and the name was changed to Sredets, a Slavonic term meaning ‘middle’, due to its location in the geographic centre of the Balkan peninsula. Following a lengthy siege, the fortified city fell in 1018 to the armies of Byzantine emperor Basil II who renamed it Triaditsa (‘between the mountains’). It remained under Byzantine control – albeit suffering from sporadic attacks by the likes of Magyars, Serbs and Crusaders – until the emergence of the Second Bulgarian Kingdom some 170 years later. During the 12th-14th centuries, Sofia (renamed yet again, this time after the St Sofia Basilica) emerged as a crafts and trade centre with goldsmiths, potters, tanners and weavers executing their trades. A number of churches and monasteries were built, most notably the Boyana church.

In 1382 the Turks managed to conquer Sofia following a prolonged three-month siege. Over the next 500 years their influence would significantly alter the city’s appearance. Minarets dominated the skyline as existing churches were converted into mosques and new ones were constructed. Sofia’s long, straight streets were turned into small, crooked sokaks. Yet the city prospered and developed into an important crafts and trade centre as the needs of the enormous Ottoman Empire provided ready markets for quality Bulgarian goods. As one foreign traveller of 1624 wrote: “Sofia is one of the biggest markets in Turkey”.

The collapse of the Ottoman Empire, which began towards the end of the 18th century, had negative economic repercussions for Sofia. The city, which enjoyed prominent status as an administrative centre, was demoted to a sandjak (country seat) and a significant part of the Turkish population moved away. Skilled Bulgarian craftsmen were threatened by the influx of cheap western-made goods. The breakdown in central authority led to disarray with destructive raids on the city carried out by renegade kurdjalii.

Though suffering from the economic effects of the Ottoman collapse, Bulgarians also experienced newfound freedoms. They developed their own trades and were able to export textiles and suchlike. Tradesmen bonded within their own branch and established charshiyi, tradesmen’s unions. As they became wealthier they were able to finance the founding of schools and chitalishta (cultural centers), which taught the Bulgarian language and developed the Bulgarian culture. The Bulgarian Orthodox Church’s position strengthened as it became fashionable for those who could afford it to travel to holy places such as Mt. Athos and to add the word hadji to their name. Religion gradually became the defining feature of an independent Bulgarian self-awareness. The Bulgarian population already had its own town council in the 1800s, whose purpose was to organize them to pay their taxes to the Ottomans. This town council was important in the later formation of a bourgeoisie able to help in the running of the city after the Ottomans left. Political activism was exemplified by the likes of Vassil Levski, who organized a revolutionary committee at Dragalevtsi Monastery. Caught and executed in Sofia by Turkish police in 1873, Levski’s example set the stage for the widespread April Uprising three years later.

The outbreak of the Russo-Turkish war saw Sofia established as a Turkish war camp. With the forces of Russian general Gurko advancing toward Sofia, the Turks tried to torch the city but were stopped by the intervention of foreign diplomats.

On January 4 1878 Sofia was liberated. When it was proclaimed the new capital the following year the population was a mere 12,000. Yet as the country’s political, commercial and cultural centre it would increase five-fold over the next thirty years. The city was at first run by the Russian Prince Dondukov-Korsakov until the arrival of the new Prince Alexander Battenberg in 1881.

The turn of the century saw the city modernized: streets were straightened and widened, parks and squares laid out, electricity and new water systems installed. Administrative and public buildings were constructed and industrial enterprise begun. After a brief fling with relative prosperity and constitutional monarchy, the city and country were racked by political and social turmoil. Strikes, political coups and assassinations were rampant in Sofia, especially in the intervening years between the two world wars.

On September 9 1944, the communist-led Fatherland Front ousted the wartime government and seized power. Under the ensuing period of communist dictatorship, the city was rebuilt and the surrounding environs heavily industrialised. Grandiose Stalinist-style architecture, exemplified by the stark government and party buildings in the Largo, overshadowed the city’s classic Renaissance and Baroque structures. Monolithic residential housing estates were erected in the suburbs and touted as the era’s major accomplishments.