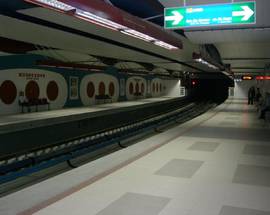 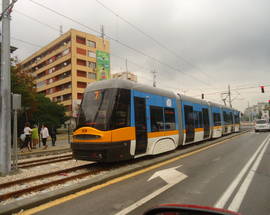 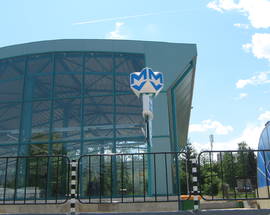 Sofia may not be as breathtakingly beautiful as many other Central and Eastern European capitals but it still has plenty going for it: a compact and manageable city centre with some rather pretty Neo-Classical and Secession buildings, antique gold treasures in the museums and Roman ruins dotted around the place. So prolific are the Doric columns that they are simply left lying around the public parks and recent excavation work has uncovered all manner of traces of the Roman city of Serdica, including an amphitheatre, and an old Roman road that is now being restored as a tourist attraction.

Without a doubt, the gold domes of the Alexander Nevsky cathedral against the backdrop of a perhaps still snow-covered Vitosha Mountain on a crystal clear day is a view that has to be seen.

Spring, Summer and Autumn are great months to enjoy Sofia's cafe society as tables move out onto the pavement and the fact that Sofia residents try to escape the hot city in July and August makes them the best months for visitors to enjoy a less hectic, traffic-free Sofia.

Sofia's main hotels are centrally located and many of the main sights are within easy walking distance. Check out our walking tour suggestions for spending anything from a couple of hours to a full day taking in a variety of Sofia's main sights.

We have been producing city guides for Sofia since 1993 so we really are the people who can tell you what there is to see and do in Sofia.

There is very little consideration for people with disabilities in Bulgaria.

Sofia is almost totally inaccessible for wheel-chair users. Since the European Year for the Disabled, gradual improvements have been made, such as wheelchair ramps to the entrances of state and municipal buildings, Alexander Nevsky cathedral and a few more important sights.

One visitor commented on the excellent service at the airport, but from that initial welcome things deteriorated. A particular problem is the state of the pavements, which are not only cracked and full of un-covered manholes, but also often blocked by cars, forcing the pedestrian to walk on the street. Underpasses are also a problem - some have lifts but most have only ramps which are so steep they would be impossible to use for a wheelchair.

Most office buildings do not have wheelchair access, though new business centres should do.

Tap water is safe to drink all over the country but not always pleasant in taste or appearance. Bulgaria's vast supplies of mineral water are widely available in 0.5 litre and 1.5 litre bottles. They are very tasty and not expensive.

In general Sofia is a relatively safe city, the most frequent crimes are pick-pocketing, mugging and car theft. If you keep your wits about you, as you should in any foreign city and avoid dark poorly lit areas at night, you should be relatively safe within the central parts of the city. Again the obvious precautions apply!
Should you be unfortunate enough to have been a victim of local crime, you should file a report at the nearest police station. You will need a Bulgarian speaker for this, and honestly speaking if the crime was relatively petty, it often is not worth the hassle.Then again if you wish to claim on your insurance you will have to go through the process.
Visitors to Sofia often fall prey of scams, be it rip-off taxi drivers or being overcharged at restaurants (e.g. they will serve you foreign mineral water - over double the price of local, or talk you into the specials which are usually far more expensive than standard main course dishes)

Bulgarian is a Slavic language with close similarities to Russian.
By far the biggest obstacle to reading Bulgarian is the Cyrillic alphabet which was developed originally by the missionary brothers Cyril and Methodius. It has 30 letters and pronunciation is entirely phonetic.
In the city centre many street names and directions have Latin transliterations but it is still a good idea to familiarise yourself with the alphabet.

The currency in Bulgaria is lev (leva - plural). One lev is 100 stotinki.
Coins are 2 leva, 1 lev, 50, 20, 10, 5, 2,1 stotinki
Notes:100,50, 20, 10, 5 leva and still 2 leva (being phased out)
The Euro is fixed at 1.95 leva
You can get leva from banks and ATM's these days with small fluctuations on the fixed rate. We no longer recommend Exchange Bureaus as not all are reputable. NEVER be tempted to exchange money with anyone on the street - you will be cheated!
Debit and credit cards are now generally accepted in most bigger and international brand stores, as well as in hotels and restaurants. Most smaller places still run on cash only!

The country code for Bulgaria is +359. If you are using your mobile phone all local numbers must be prefixed with this number, dropping the first zero (0) from the local number.
Dialling out the international access code is 00 or + followed by the country code.

Public toilets can be found in the main underpass area near Serdika underground station and near the NDK underground station, as well as in other locations around town. there is usually a charge and the attendant will give you your ration of toilet paper. Most of these are old and not very pleasant. Newer toilets, free of charge are found in all the shopping centres, and of course most restaurants and cafes will not turn you away if you are desperate. Try to avoid the chemical toilets at all costs!

Bulgarian adopted Christianity in 865 AD. Over 75% of the population subscribe to the main religion; Eastern Orthodox, but on the whole they are very tolerant of other religions.
Sofia prides itself in having an Orthodox church, a Catholic church, a mosque and a synagogue all within 1 square km.

Bulgarians on the whole are heavy smokers with little consideration for the non-smoker. Since 2012 smoking indoors is banned in all public places,including restaurants. However you will find some very loose interpretations of the law as far as restaurants and other places of work are concerned. In some locations you will find phone numbers to report infringements. Fines are high.

No shortage of free WIFI in Sofia. Nearly every bar and restaurant offers free WIFI and there is even WIFI available on public buses as well as inter city coaches. Zaimov Park, off Madrid Blvd. near the city centre prides itself with free WIFI coverage.