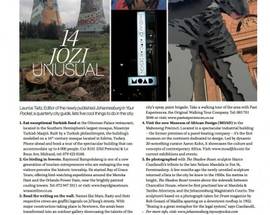 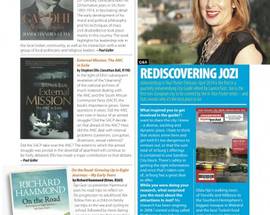 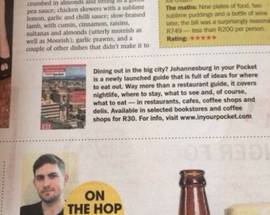 Launched in February 2014, Johannesburg In Your Pocket has been getting lots of fan mail and great reviews. The highlights are here:

'The 50 Best Travel Websites' - The Indepenent (UK), June 2017.
'On a trip to Johannesburg last year, this was the only guide I could find that was up-to-date and informative about the city,” says Julia. “Everything else I saw skirted around what there was to offer and treated it as a hub for Kruger National Park, but this really got under the skin. I’ve been a fan of In Your Pocket since then. Whatever the city, they really know their stuff.'

'An intelligent guide to your favourite city' - The Times (South Africa), February 2014.
'This lively little insider's guide to the city we love to hate, but love nonetheless, offers insightful, well-researched information about everything you need to know when visiting the city. The 68-page guide lists the best places to shop, eat, stay, drink, party and take children. It is an exhaustive list put together carefully by former journalist and editor Laurice Taitz. The listings are interspersed with interesting facts about the city, maps and illustrations, and smart advice for getting around...'

'Navigating your city' - Business Brief February/March 2014 bbrief.co.za
'From February 2014 visitors to South Africa's most dynamic city will be able to navigate the city's tot spots with an independent, well-researched and up-to-date city guide...'

Johannesburg gets slick new pocket guide - News24, March 20, 2014
'A nicely thought out City Guide called “Johannesburg In Your Pocket” has been created, and is the first “In Your Pocket” guide to exist outside of the walls of Europe, making it a great achievement for this African city.'

Future Joburg - Dino Mavrokordatos, Future Cape Town, March 03, 2014
'With the guidance of 'Johannesburg In Your Pocket' we can turn a rich, golden history into a hopeful, hip and happy experience...Going through this quarterly guide will assist locals and tourists in getting to know this humble, yet flamboyant personality. All you need to know at your fingertips'.

Jozi Unusual - Destiny magazine, destinyconnect.com
'Laurice Taitz, Editor of the newly published Johannesburg in Your Pocket, a quarterly city guide, lists five cool things to do in the city.'

Rediscovering Jozi - Destiny Man magazine, destinyman.com
'Johannesburg in Your Pocket February-April 2014 is the first in a quarterly Johannesburg City Guide edited by Laurice Taitz. Jozi is the first non-European city to be covered by the In Your Pocket series – and Taitz reveals why it’s the best place to be...'

BLOGS:
'Joburg's awesome new travel guide' by @2Summers, February 2014
'... Within five minutes, I had learned at least 10 things about Jozi that I didn’t know before. The people who created this magazine love Joburg every bit as much as I do, and it shows.'

'Seeking out Indian inspiration in Joburg' by Gauteng Tourism Authority @VisitGauteng, June 2014
'As we head into winter, get the latest issue of Johannesburg In Your Pocket to discover the fascinating history and influence of India in Johannesburg.'

#MyJoburg by Jo Buitendach from Past Experiences Ask a Local: #MyJoburg
Where to eat at 44 Stanley feature
#MyJoburg by Bret Dugmore feature
see more