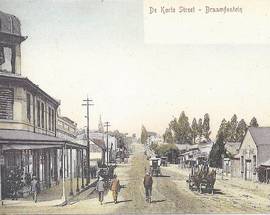 The history of Johannesburg as a city is brief by comparison to most world cities, but nevertheless breathtaking. In just over 120 years a lawless mining camp has flourished and become Africa’s most prosperous and developed metropolis, full of colour and contrasts. The golden mine dumps that once stood out as landmarks are no longer as prominent and in their place is an immense treed city with areas of urban sprawl juxtaposed with Sandton’s gleaming high-rises.

While the area in which Johannesburg is located has a rich pre-history going back to early human ancestors and iron age settlements that story is better left to the experts at Maropeng and the Origins Centre. The city’s history is inextricably part of South Africa’s history, and the struggle for freedom and democracy.

1886 Australian prospector George Harrison discovers gold on what was then called the Witwatersrand, spurring a gold rush. The tent camp becomes a magnet for fortune hunters who make their way to the mining encampment bringing with them contract labourers. Within three years the place becomes the largest settlement in South Africa.

1887 The city’s first newspaper The Star and the Johannesburg Stock Exchange is founded.

1893 The Johannesburg Public Library opens in a corrugated iron structure aimed at offering young men recreational activities other than drinking and visiting brothels.

1890s A number of large mining companies control the area’s gold mines, creating enormous wealth for the company owners. Cue the so-called ‘Randlords’ whose legacy still remains in the architectural styles of their mansions on Parktown Ridge.

1899-1901 Strained relations between the mine barons, English-speaking new arrivals and the Transvaal’s Boer government lead to the Anglo-Boer War, and subsequent British control of the area. The colonial government formalises racial segregation which later will be entrenched by the iniquitous system of Apartheid.

1920 Protests and strikes erupt over the appalling conditions in which the city's black workers live.

1928 Johannesburg is declared a city.

1948 White privilege is entrenched with the ascension of the Nationalist Party, who implement the policy of Apartheid, relocating thousands of black people to remote “homelands” and introducing pass laws to severely restrict their movement. Black opposition parties are banned.

1955 The South African Congress Alliance gathers in Kliptown, Soweto to adopt The Freedom Charter. The stage is set for increasing resistance to Apartheid policies. In the same year 2000 police officers descend on the multi-racial Johannesburg suburb of Sophiatown and forcibly remove people from their homes, before bulldozing every building in the neighbourhood under the state's new 'Group Areas Act'. Sophiatown's black, so-called Coloured (mixed race), Indian and Chinese residents are forcefully relocated to new racially segregated townships far from the city in what is now Soweto and Lenasia.

1976 The Soweto Uprising by children against the Apartheid government’s discriminatory education policies is a milestone event. When South African police force members open fire on unarmed children they unwittingly start to bring about an end to Apartheid.

1980 The following decade is the most turbulent in South Africa’s recent history, with states of emergency declared, violence erupting in the townships, street battles against the racist police, detentions without trial for political activists, tightening sanctions and heightened state security.

1994 South Africa holds its first democratic elections. Nelson Mandela is elected President of a free country. Having lived in Alexandra and Soweto at different times of his life, he now makes his private home in Houghton, the house in which he died in 2013.

1995 The almost exclusively white Springbok Rugby Team wins the World Cup against New Zealand, and a triumphant Nelson Mandela walks onto the field at Ellis Park to join the team, wearing the Captain’s jersey. This is an enormously significant act, crowning his efforts at reconciling white and black South Africans.

2003 The Nelson Mandela Bridge is built.

2004 The Constitutional Court of South Africa building on Constitution Hill, Braamfontein, is inaugurated. In the same year Johannesburg grants Nelson Mandela freedom of the city.

2013 On December 5, the world bids farewell in Johannesburg to one of its all-time greatest leaders, former president Nelson Mandela.

2019 South African win the Rugby World Cup for the third time and return from Japan for a triumphant nationwide trophy tour, starting at a packed out OR Tambo International Airport in Johannesburg.

2020 On March 15 a National State of Emergency is declared in South Africa in light of the global Coronavirus pandemic. On March 26 the country enters its first-ever nationwide 'lockdown'.

Subscribe to our free weekly Johannesburg In Your Pocket newsletter for all the latest news and reviews about what's new in Joburg!

Kahlo, Sher-Gil, Stern: Modernist Identities in the Global South at JCAF feature
Where to shop in Joburg – January 2022 Joburg shopping
What to cook - top recipes from our favourite chefs Lockdown in Joburg
see more
Put our app in your pocket