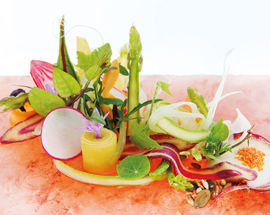 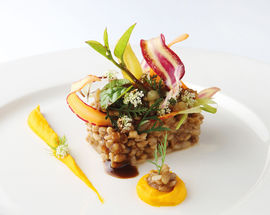 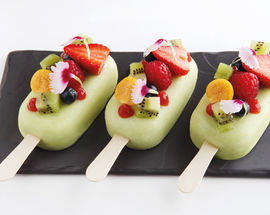 Qunu restaurant at luxury hotel The Saxon, Villas & Spa is named for the rural birthplace of Nelson Mandela. The hotel has close ties to this leading figure, as it was formerly the home of insurance magnate Douw Steyn and the place where Nelson Mandela retreated to write his autobiography Long Walk to Freedom.

But while Madiba’s favourite food was tripe, Qunu has added a new dimension to its menu with executive Chef Jane-Therese Mulry’s VegVegan dishes, with recipes inspired by Sarapana – the Saxon’s incredible fruit, herb and vegetable garden tucked into the estate grounds (meat-eaters, do not despair the regular menu has plenty of options that cater to your tastes).

Located in one of Joburg's top luxury hotels, eating at Qunu might also be an occasion for a bank loan but it would be worth it for the impeccable service and exceptionally high standard of food.

Mulry has a  rasping voice, a heavy Queensland Australian accent and a way of presenting vegan dishes that could turn just about any declared carnivore. She has worked across the globe, having served as executive chef at an Australian resort voted the best in the annual Gourmet Traveller Awards and The Siam hotel in Bangkok recognised as one of the world's best city hotels by Conde Nast Traveller.

Her Instagram posts reveal her love of seeing food grown naturally, being pulled straight from the ground, pieces of earth still clinging to the roots. Fresh, green, life-giving and healthy. She also has said in an interview that having worked in Bangkok, she enjoys visiting Cyrildene’s Chinatown on the east side of the city for its fresh Asian produce.

Opting for the VegVegan dishes doesn’t mean that your only meal accompaniment is a pot of green tea.  The dishes on the menu have been thoughtfully paired with vegan wines produced by South African farms. Because the ingredients are home grown the menu is seasonal and showcases the best produce and botanicals produced in the garden.

For the menu launch Mulry created a vegan tasting menu that hit the high notes. The Saxon seeded bread loaf is an absolute hit (she whispered that guests have been known to order a loaf to take home). We loved the black bean, mushroom and red cabbage in a tamarind dressing and the fresh flavour of spearmint in the kale, almond feta and quinoa dish. The kiwifruit popsicle with fresh fruit was an excellent palate cleanser.  The plate of pearl barley, sunflower seed and crispy carrot, despite its petit appearance had a hearty flavour influenced by the coffee jus. Dessert was the prettiest coconut rice pudding topped with the sweet sharpness and varied textures of pineapple sorbet, pineapple gel and macerated fruit.

We like the playfulness of the dishes, zingy range of ingredients, and the idea of eating food fresh from the garden. Makes it worth being a flexi-tarian when it comes to eating.

36 Saxon Rd, Sandhurst
/johannesburg/saxon-hotel-villas-spa_137241v
At the sumptuous Saxon Hotel, Villas and Spa, each room is fit for royalty and designed for absolute comfort down to the last detail. Built for leisure the hotel is an island of tranquillity set within ten acres of landscaped gardens. Exclusivity is guar
see more