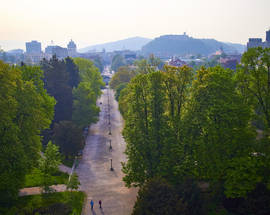 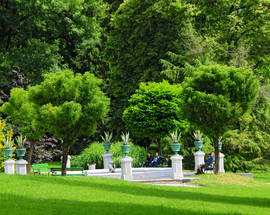 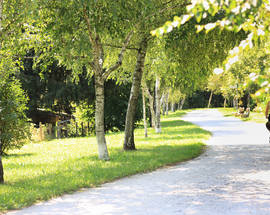 In June of 2014 Ljubljana was awarded the prize of being the Green Capital of Europe for 2016, beating Oslo, Umea, Nijmegen and Essen to the prize. The panel was particularly impressed by the progress Ljubljana made towards its green vision over the past decade and its commitment to sustainable living. The award is given to the city most committed to improving the urban environment, that has a well-established record of achieving high environmental standards and that is truly committed to the ambitious goals set out for future environmental improvement.

Ljubljana has a truly green soul, goes above and beyond the call of duty to increase awareness of environmental issues and has reinvented the old core of its city centre to become an oasis for pedestrians and cyclists. The awards continued to roll in for Ljubljana in April 2015 when the city was awarded the Tourism for Tomorrow award by the World Travel & Tourism Council, a prestigious award for the most sustainable travel destination.

Even the most cursory stroll through Ljubljana will make one aware of the green spaces. This is even true smack bang in the centre, as Ljubljana Castle and the greener-than-green Castle Hill tower over everyday life here. Trees and greenery surround the embankments of the Ljubljanica, designed by the late and great Jože Plečnik. Ljubljana is also home to one of the oldest botanical gardens in Europe as well as four nature parks, the most well known being Tivoli Park. Walking and cycling paths traverse the city and the city area is also home to a vast array of fountains with excellent drinking water.

featured
/ljubljana/bicikelj_136326v
Ljubljana’s bicycle rental scheme, known as bicikeLJ, is a great way to get around the city. Some 61 stations with a total of 610 bikes are concentrated in …
see more
Featured
Markets

Vodnikov trg 6
featured
/ljubljana/central-market_38447v
Many people would argue that no single place in Ljubljana encapsulates the heart and soul of the Slovenian people more than Prešeren Square. However, with all …
see more
Featured
Gifts & Souvenirs

Vodnikov Trg 4
EDITOR'S PICK
/ljubljana/krasevka_46224v
‘Food glorious food’ goes the song and you may well find yourself humming it as you scan the shelves of this tasty shop. A family-run business, Kraševka …
see more
Editor's pick
Slovenian Fashion

Stari Trg 5
EDITOR'S PICK
/ljubljana/cafetino_38362v
Cafetino is perhaps the only café in town that wouldn't look out of place in one of New York's hipper neighbourhoods, not simply because it's cool, but because …
see more
Editor's pick
Classic Cafés

Krekov trg 8
EDITOR'S PICK
/ljubljana/cokl_136909v
Coffee nerds this is the café for you in Ljubljana. Sandwiched amongst the cafes and bars on Krekov Trg (besides the funicular) Čokl has just a few tables on a …
see more
Editor's pick
Brunch

Mestni Trg 22
featured
/ljubljana/rogaska-crystal_108440v
Rogaška Crystal is one of the leading producers of crystal ware in the world and you’ll find the largest collection of Rogaska Crystal right here in Slovenia. …
see more
Featured
<< < 1 2 3 4 5 6 > >>