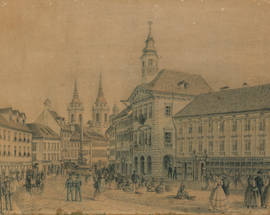 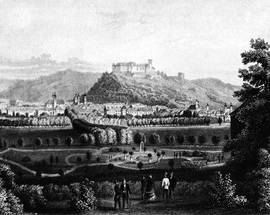 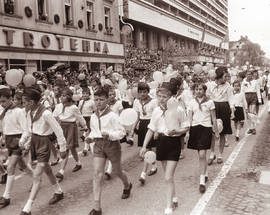 It started with a myth. As the story goes, our favourite Greek mythical hero Jason and his merry band of Argonauts founded Ljubljana. The team had somehow stolen the Golden Fleece from King Aetes and then, as any band of thieves would, ran away. This must have been quite tiring, so they decided to stop at a large lake near the source of what we now know as the Ljubljanica, where they planned to disassemble their ship and lug it all the way back to Greece. Imagine their horror when they discovered a monster in the lake! Jason wouldn’t be a historical hero without slaying at least one beast, so after what we imagine was a mighty battle the dragon was slayed and Jason and his Argonauts were on their way. Thus Ljubljana, and the dragon that adorns the city flag (and Dragon Bridge), were born.

We can’t really verify this story (and we wouldn’t want to), but what we do know is that 2000 years before the birth of our lord and saviour mostly hunters and fishermen inhabited the Ljubljana marshes. Over the next 2000 years a number of different tribes would come onto the land and replace one another as rulers, among them the Veneti, Illyrians and a number of different Celtic tribes.

It wasn’t until the Romans arrived around 50BC that things started to truly move forward however. It only took them a century or so to establish a thriving settlement here, which was known as Emona. The theme of Ljubljana’s (and indeed Slovenia’s) history came to the fore here, as its geographical position made it strategically vital. Merchants and craftsmen flooded in, and the streets were paved (as in literally paved) early on. Nothing lasts forever though, and with the decline of the Western Roman Empire so too came the decline of Emona. This deterioration was essentially completed in 452, when the Huns tore the settlement down.

Enter the Slavs. Well, that’s as far as we can go on that, as even though they entered the area in the 6th century it didn’t take long for stronger neighbours to begin fighting over them. The Francs and the Hungarians were the biggest menaces at this time, until Germanic influence began to spread in the 12th century. It is in this century that the first mention of Ljubljana (or Laibach, its German name) comes, in a document regarding the allocation of a small estate near Ljubljana’s castle hill to the Patriarchate of Aquilea.

Echoing the improvements made with the Romans hundreds of years earlier, with the Germans came rapid growth. The city squares that we frequent today (Stari trg, Mestni trg and Novi trg) were set up, and by 1220 it had been granted city rights. Peace and prosperity wouldn’t last, and after being briefly overrun by Czech King Premysl Otakar II in 1270 Ljubljana would come under Habsburg rule in 1278. It would stay so until the 20th century.

Continuing the theme, Ljubljana continued to flourish. A huge earthquake in 1511 threatened to derail this development, but the town was rebuilt in renaissance-style and was a one of the gems of the Habsburg Empire. The 16th century was a vital one for Slovenians as it was truly the beginning of Slovenian national feeling, the campaign spearheaded by the development of the Slovene language. In 1550 Primož Trubar published the first two books in Slovenian, and Jurij Dalmatin also translated the bible into the language.

In 1701 the Philharmonic was established in Ljubljana, and the arts scene continued to flourish. The Austrians were resolutely in charge however, despite a brief flirtation with Napoleon at the beginning of the 19th century (1809-13). The first half of that century would see great changes to Ljubljana’s aesthetic, and the second half saw an explosion in Slovenian national feeling. The Slovenian Society was established in the 1860s, and it was at this time that Ljubljana truly became the Slovenian cultural centre. The 19th century saw a whole host of nations lobby for more independence from the great empires throughout Europe, and Slovenia was at the forefront of all of this.

Another earthquake hit the city in 1895, but rather than drown in self-pity Ljubljana continued to evolve, and many of the sights that we adore in town today were put up or completely renovated during this rebuilding process, including Dragon Bridge and Prešeren Square. The 20th century would see the crumbling of the empires, with Slovenia entering into a union with Serbia and Croatia (known as the Kingdom of Serbs, Croats and Slovenes, later Yugoslavia) at the climax of World War One. Ljubljana suffered very different fates in the two world wars. World War One mostly passed the city by, only affecting it indirectly. World War Two was the quite the opposite, with the city coming under fascist occupation and being encircled by a 30km barbed wire fence. This isolation is remembered with the Path of Remembrance and Comradeship today.

Post-World War Two, Ljubljana and Slovenia became part of Yugoslavia once more, under the rule of Josip Broz, or ‘Tito’ as he was better known. Slovenia bypassed much of the unrest that flitted throughout the country, and continued to do as it had done under any other larger power: flourish. Tito died in Ljubljana in 1980, and with him gone Yugoslavia slowly began to unravel. As the final decade of the 20th century came around a plebiscite was held to decide on future Slovenian independence, which led to independence being declared on June 25th, 1991. A short ten day scuffle followed, but a mere 4000 years or so after the first dwellers made their way to the area, Ljubljana was finally capital of its own state.