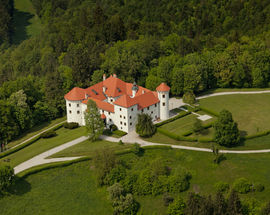 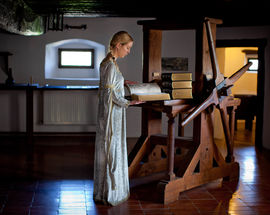 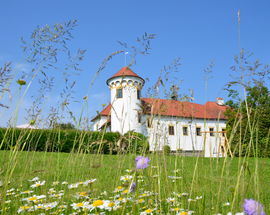 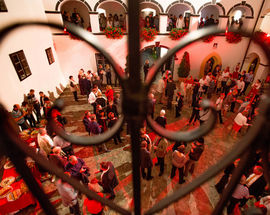 If you hail from North America, castles are an undeniable element of the fantasy world. As many of us grew up watching movies about damsels in distress, fearsome dragons and great battles, visitors to the tiny chicken-shaped country of Slovenia may find themselves feeling that they’ve stepped off of the plane and right into a Disney film. Although Slovenia has many castles, there are few that offer as broad an experience as Bogenšperk.

Located less than an hour away from the capital, Castle Bogenšperk is a sight to behold; its red roof and white facade stands out with pride against the greenery that surrounds it. The renaissance castle can trace its history back to the 12th century as Castle Lihtenberk, a medieval fortress located nearby and built by the powerful Lihtenberg family. Following an earthquake in 1511 that rendered it uninhabitable, the Wagen family, who were in possession of the building until the beginning of the 17th century, undertook the task of constructing what you see today.

Over the centuries, ownership of the castle has changed hands many times, most notably, it fell into the possession of Johann Weikhard von Valvasor, a famous polymath and a fellow of the Royal Society in London, who spent 20 years of his life (1672 - 1692) working and living in the stunning structure. These years were considered to be the most productive of his life and are considered the castle’s golden age. The end of World War II saw the pillaging of the grounds before it became home to a group of Jesuit monks. In 1973, the Municipality of Litija began a systematic renovation of the building restoring it to its former glory and re-opening it to the public.

Today, Bogenšperk boasts a fascinating museum that allows you walk in the footsteps of its previous owners focusing on the life and work of Valvasor. While the museum can be viewed individually, tours are offered every hour on the hour. However, groups are highly encouraged to take part in the animated castle tour guided by the Baroness Ana Maksimila Valvasor and her humble servant Jurij, which provides visitors with a more interactive way to enjoy the setting.

The museum includes a variety of exhibitions, each more interesting than the last. Hidden Stories of the Castle Walls follows the evolution of the structure including a display of original 17th century artifacts and the multimedia room gives visitors a choice between 5 different films related to the castle and its occupants as well as short stories and contemporary illustrations of the castle’s history. Valvasor’s Working Room, preserved in the style of the period, offers a glimpse of an original copy of his book, The Glory of the Dutchy of Carniola (1689), with other exhibitions delving further into the man behind the work: his views, correspondence and other achievements. The Copper Printery takes you through the process and products of the printing press and the exhibition on national costumes reveals the ancient clothing culture of Slovenia through the lives of its citizens. For the fearless, the exhibit on superstitions will lead you through the dark heart of the region, unleashing the horror of the 17th century witch trials, folk superstitions and mysticism.

While sections of the castle can be rented out for a variety of events (including the Library, Gallery, Knight’s Hall, Atrium and Courtyards), the estate also ensures that the grounds are never empty by hosting numerous events over the course of the year. Although there is much to choose from, Valvasor Day on May 21 is one of the year’s highlights. Beginning with a walk around the estate at 9am sharp, the afternoon is dedicated to the commemoration and celebration of Valvasor’s birth. This day truly offers visitors the unique opportunity to walk in the shoes of an accomplished 17th century man: to stand where he once stood and see what he once saw. It is the closest humanity can get to time travel.

The greatest wealth of Castle Bogenšperk cannot be found in the riches contained within its walls, but in its devotion to its history allowing all who enter a trip back into the past. Whether your interest is firmly set in the history of this world or in the imagination of another, there are secrets waiting to be uncovered and quiet corners to be explored. Even though it is a tad off the beaten path in a country littered with castles, Castle Bogenšperk is absolutely a glimmering gem in Slovenia’s crown.