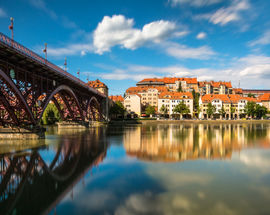 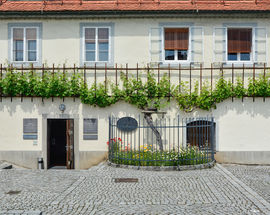 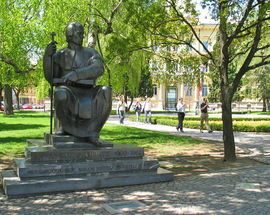 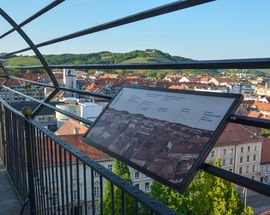 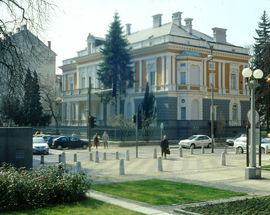 Not only is Ljubljana a magnificent city and hugely popular with foreign tourist for short breaks, but its central location makes it super-easy for those wishing to explore other parts of the country, even if time is limited. In just a few short hours and by any method of transport visitors can enjoy a day trip further afield to discover some fascinating places of interest that would otherwise remain unseen.

Maribor sits in the foothills of the Pohorje Mountains and straddles the banks of the Drava River. Back in Yugoslav times the city was an industrial powerhouse. Today, despite being Slovenia’s second largest city, it maintains all the charm of a country town. Maribor boasts a vibrant cafe culture, excellent natural, cultural and historic sights, and it is also home to the oldest vine in the world. Just a 90 minute drive from Ljubljana, Maribor makes the perfect day trip. Trips and excursions can be booked through the Maribor Tourist Information Centre. Click here for full details.

The Old Vine House
The oldest vine in the world can be seen winding its way up the front of the building. At 400 years old it has rightfully claimed its place in the Guiness Book of Records and still bears fruit today. The museum offers guided tours and the house also hosts a wine festival held every October.

Maribor Cathedral
This Roman Catholic cathedral is dedicated to Saint John the Baptist and dates back to the late 12th century. Pope John Paul II’s trip to Slovenia in 1999 is commemorated in a stunning stained glass window. During the spring and summer trips to the top of the tower are available, rewarding visitors of their 162 step climb with breathtaking views.

Mestni Park (City Park)
Just north of the city and well worth the footsteps is the beautiful City Park. Fondly referenced as one of Maribor’s best features the park is home to many different species of birds and other wildlife that live in and around the three ponds. The park is a must for nature lovers as well as children who can enjoy the playgrounds and the green open spaces.

Bishop Slomšek Monument
Tucked away in a shady corner near the entrance to Maribor Cathedral you’ll find the Bishop Slomšek Monument. Slomšek was Slovenia’s first saint and a fervent supporter of the Slovene language. He is largely credited with having founded the primary school system in Slovenia.

Museum of National Liberation
Founded in 1958 by the People’s Committee of Maribor the museum houses an impressive collection of WWII material and is also home to the Pedagogical Museum. Guided tours are available by request were visitors can learn about the Nazi presence in Slovenia and their attempts to ‘Germanise’ the country. More information can be found here.

Vojašniška 8
featured
/ljubljana/the-old-vine-house_45269v
Where the oldest vine in the world can be found winding its way up the front of the building, the house is now a museum dedicated to teaching visitors all …
see more
Featured
Churches

Slomškov Trg 20
/ljubljana/maribor-cathedral_45250v
First built in 1248 as a Romanesque basilica with a nave and two aisles, the cathedral gained its current appearance in the 15th century as a Gothic structure, …
see more
Museums

Heroja Tomšiča 5
/ljubljana/museum-of-national-liberation_43619v
This museum exhibits an impressive collection of material from World War II when the Nazis occupied Slovenia and were resisted by the Yugoslav Partisans. …
see more
Top Attractions

Pri Parku
featured
/ljubljana/city-park_43622v
This immaculately-kept park just north of the city centre is definitely one of Maribor's best features. With its three ponds teeming with many different …
see more
Featured
Monuments

Slomškov trg
/ljubljana/bishop-slomsek-monument_43607v
This relatively new statue - only erected in 1991 - is tucked away in a shady corner opposite the main entrance of Maribor's Cathedral, where the bishop is …
see more