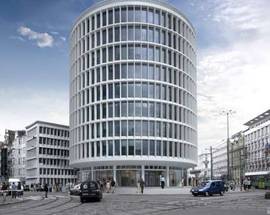 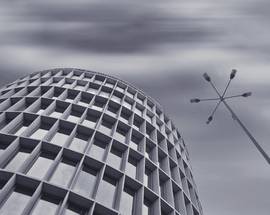 Looking for remnants of the People's Republic? Cast your camera to the western end of ul. Grudnia, where the imposing Okrąglak (Rotunda) presides over a four-point intersection. This cylindrical marvel is one of Poznań’s defining icons and has been a listed building since 2003. Constructed between 1948 and 1954 this beast is a leading example of Polish modernism, built to a blueprint by Marek Leykam. Originally slated to be ten storeys, this eight floor masterpiece once housed Poznań’s top department store, and it was here that during the lean years of communism locals would queue to buy ‘luxury’ products unavailable elsewhere.

After years of abject neglect, in 2011-2012 the Okrąglak was restored and converted into 51,000 square metres of A-class office space. As for Marek Leykam, the brain-box who designed this battle-pig, more of his work can be found in the shape of the University of Physical Education in Poznań (ul. Królowej Jadwigi 27/39), as well as in the capital – it was he who designed the Government Office on ul. Wspólna 62, as well as the 10th Anniversary Stadium bulldozed to make way for the brand new National Stadium.