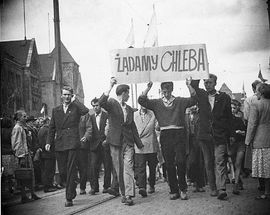 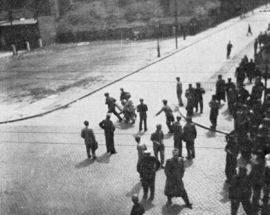 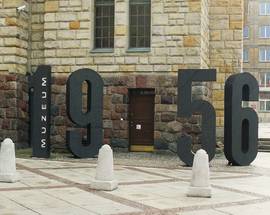 The Poznań Riots, or the '1956 Uprising' (because PL loves its Uprisings), was the first recognised strike and street demonstration in Communist Poland. Although brutally suppressed, this show of the people’s strength remains an intense source of pride for the local community, and though it would be another 33 years until the people of Poland would enjoy complete freedom from the Kremlin, the uprising led to a significant liberalisation of Soviet policy in Poland, and would act as a prelude to the 1980 Lenin Shipyard Strikes in Gdańsk that saw the birth of the Solidarity movement.

The death of comrade Stalin in 1953 provoked a certain degree of optimism among Poles, promising an end to the social and political terror associated with the Soviet Union’s hegemony of Central and Eastern Europe. Hopes were short-lived, however, as Nikita Khruschev’s address to the 20th Convention of the USSR’s Communist Party in 1956 spoke of strengthening socialism’s grip on the East, and of the dangers of individualism. Simmering with discontent the Polish media helped stir local discord and on June 28th strikes broke out in Poznań’s factories – first in the Stalin brick factory (later the ‘Hipolita Cegielskiego Factory’), before spreading to the city’s other major industrial plants. An estimated 100,000 workers descended on the Municipal National Council (now the Zamek building), chanting slogans like ‘Bread and Freedom’ and ‘Out with Bolshevism,’ while demanding lower prices, higher wages and a reduction in work quotas.

Initially peaceful, the protests took a violent turn when it was revealed that the team negotiating on behalf of the strikers in Warsaw had been arrested and detained by the authorities. Infuriated, the demonstrators stormed Poznań prison, liberating 257 inmates, destroying records and seizing armaments. Armed with assorted small arms and petrol bombs, the insurgents marched back to the city centre to continue their protests. With a volatile atmosphere threatening to run out of control, the communist authorities reacted by deploying 10,300 soldiers, 400 tanks and 30 armoured personnel carriers to Poznań. Fierce street battles followed, but with the city cut off from the outside world, order was quickly restored by June 30th. The clashes officially left 76 civilians and eight soldiers dead, with over 600 strikers injured (though unofficial estimates were vastly higher). Victims included a thirteen year old boy shot through the heart while waving a Polish flag, and the news of the riots helped spark an equally heroic anti-communist uprising in Budapest. Although Poland was to suffer another three decades of Communist control, the riots had a huge influence in the shaping of post-war Poland. The Polish Communist Party was left reeling from the chaos, and several Stalinist hardliners found themselves dismissed in a bid to appease the people, as limited social reforms and a small-scale lifting of press censorship followed. A museum commemorating the events of 1956 in the Zamek (ul. Św. Marcin 80/82) is worth visiting to really understand the momentous events of the ‘Poznan June’.

Places in Poznań connected with the 1956 Uprising

Pl. Mickiewicza
/poznan/1956-uprising-monument_36962v
However impressive the nearby Adam Mickiewicz is, he finds himself outshone by the soaring 1956 Uprising Monument. Made of steel, the two crosses (
see more
Museums

ul. Św. Marcin 80/82
/poznan/1956-uprising-museum_21731v
The Zamek is an impressive building alright, but pride of place goes to the 1956 Uprising exhibition, honouring the first armed resistance the communist regime …
see more